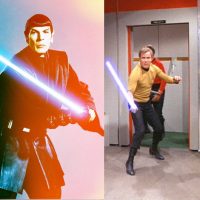 In a Parallel Universe the 1980’s were even more awesome with a most miraculous motion picture crossover we never saw here. The blockbuster was the much anticipated Star Wars vs Star Trek! This fabulous film was number one at the box office for over 3 weeks in a row! It’s the story of the USS Enterprise crew falling into a wormhole that sent them to the Star Wars Galaxy known as Mosillia. Immediately Darth Vader and Emperor Palpatine sense a strong unexpected presence in The Force. That being the newly super Force sensitive Captain James T Kirk.

After valiantly taking a shuttle craft out to guide the Enterprise out of the violent wormhole he crash lands on a deserted planet overrun with midi-chlorians. Microscopic beings that cause The Force to surge within a given individual. A freak reaction with electrical sparks coming from the crashed shuttle causes the midi-chlorians to become imbued deeply in his cells thereby giving Captain Kirk the potential to be even more powerful than Darth Vader! Possibly even Palpatine as well!

Kirk is sought after by Vader as the Enterprise’s superior technology aids the rebel alliance in their battle against the Empire. Commander Spock wills himself to have some limited access to the Force even without midi-chlorians. All in an effort to save Kirk from falling prey to the dark side of The Force. A crucial lightsaber battle displays Kirks awesome new Force abilities as he single handedly takes on both Vader and Palpatine with a last minute save by Spock and Luke Skywalker! There was also a light hearted scene between Han Solo and Enterprise Engineer Montgomery Scott on board the Millennium Falcon. In the end the crew of the Enterprise is instrumental in blowing up another Death Star and giving the rebels a victory. However the Empire still lives for another Star Wars movie.

Kirk and crew return home to the Milky Way Galaxy courtesy of The Force and the powerful Jedi Yoda. Once back on Earth Kirk no longer displays The Force despite still having a boat load of midi-chlorians in his body. This implies that The Force is something unique to the Star Wars Galaxy….or is it? The very last scene of the movie shows Kirk contemplating the immense gravity of what happened as he stares deeply at a light saber on a table. It moves just a bit on its own as the screen fades to black and the credits role.

The audience in most theaters rose to their feet in loud cheerful applause. Some even had tears of joy in their eyes! Despite the popularity and success of the cross over there was never another such production due to storyline disagreements between competing studios. In addition Captain Kirk never displayed Force powers nor was there any mention of the crossover in future Star Trek movies. However William Shatner and others wrote a series of crossover novels in which Kirk became a Jedi who returned to the Star Wars Galaxy. None were considered canon on either side of the scifi aisle. Maybe not worth mentioning but in that Parallel Universe Shatner ditched his wig and went bald. This only after being inspired by Patrick Stewart, aka Star Trek: The Next Generation’s Captain Picard. LOL!