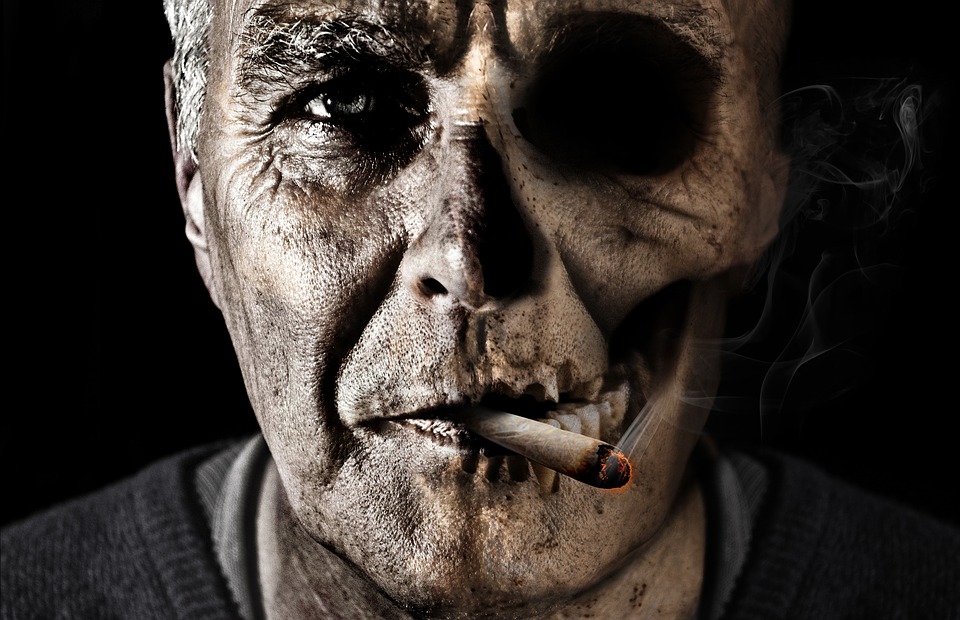 The sinister stench sails slowly within,
a sinuous specter trespassing my domain,
the stifling stink seriously suffocates,
perpetuated by a weak willed wayward one,
a pathetic zombie serenely sucking life away!🚭

By Xavier Remington | Mystic Poetry Portal |
-A Lifelong Non-Smoker Of Strong Will!

Visit http://www.no-smoke.org/ to learn how to deal with the source of the toxic smoke stench in your life! Also see http://lcfamerica.org/ for more information on the lung cancer smokers spread to themselves and others with impunity!

It’s no coincidence 40% of Smokers are those with mental illness. The rest presumably think it makes them look cool. Not sure how sucking away on a stick is cool? It’s sort of emulating something embarrassing that shall not be said here. Then we have the ones who pace back and forth along roadways or walk about properties examining leaves on trees as they puff away. Or those gems in workplaces who huddle together outside in the winter as a column of smokes rises like a signal for help! And last but not least those creepers who hide in the dark shadows of the night as you think you’re alone but then you suddenly smell the tobacco stink thus giving away their position!

It’s also interesting that those without a college degree tend to smoke the most as well. Hopefully the silly smoking idiocy passes away by the 22nd Century because the 20th Century called and it wants the smoking scum back where it belongs! Until then there should be a ban on it everywhere unless you can keep it confined to your own private home or weirdo smoking club. The trespass of your sinister smoke upon innocents will finally come to a close someday whether you like it or not!

"The Sickening Smoker Zombie", 5 out of 5 based on 1 ratings.
Share This Story

We love all things Halloween! Whether it's glee of trick o treating, the iridescent allure of the autumn season, or the spooky mystique of supernatural beings. Enter the world of Halloween all year round on our All Hallows Blog.
View all posts by Halloween Haunter →
This entry was posted in Poetry and tagged Smokers, Smoking. Bookmark the permalink.
Copy Protected by Chetan's WP-Copyprotect.