Posted on February 18, 2016 by Halloween Haunter 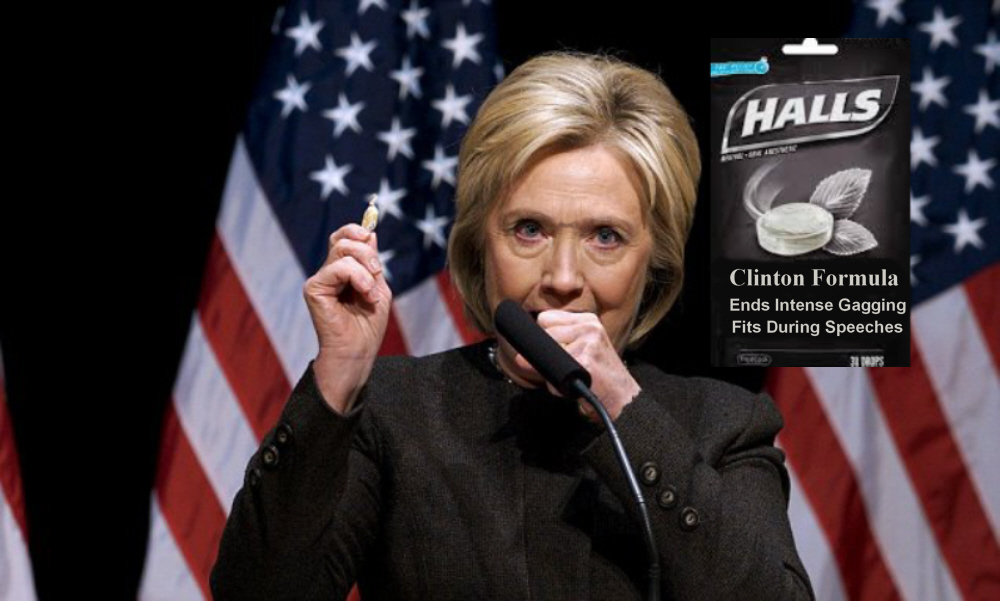 In a Parallel Universe Hillary Clinton parlays her infamous public speaking gagging fits into a lucrative Hall’s Cough Drops endorsement after losing her 2016 Presidential bid. She coughs her way across the country going through a bag of Clinton Formula Halls every day!  Along the way she pulls in $100,000 or more speaking of her puzzling plight as a victim of daily dry heaving syndrome. Hillary gives thanks to the good folks down at Hall’s for making her fantastical phlegm ridden fits less hellish! Together she, and Mondelez International (Owner Of Halls) work feverishly to find a cure for her horrifying whooping cough level hacking!

Get Your Own Terrifying Trump Toup!

speech.  Investigators linked it back to Trumps head, and a sinister conspiracy was unraveled that revealed Donald Trump indeed commanded his wondrous wig to sabotage Hillary’s Presidential bid well in advance of the final candidate selection.  Due to lack of evidence Trump was exonerated from major wrong doing. However his wig was convicted, and sentenced to life in a Styrofoam head prison for wayward wigs.  Trump was forced to go bald but sported a cheesy comb over as ordered by the Federal courts.   Hilary Clinton went on to live a cough free life as a commercial actor for a variety of health, and feminine products.

"Hall's Hillary Clinton Cough Drops", 5 out of 5 based on 1 ratings.
Share This Story

We love all things Halloween! Whether it's glee of trick o treating, the iridescent allure of the autumn season, or the spooky mystique of supernatural beings. Enter the world of Halloween all year round on our All Hallows Blog.
View all posts by Halloween Haunter →
This entry was posted in Halloween Hilarity and tagged Cough Drops, Hillary Clinton, Politics, President. Bookmark the permalink.