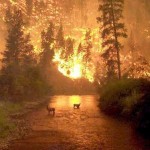 It was Monday morning April 2nd and Psychic Julia Hathaway had fallen asleep just before Noon at the offices of Mystic Investigations while the rest of us went to the cafeteria for lunch.  Her mind entered the infinite expanse of the dream plane, and visions of hellish flames haunted her.  She witnessed a nightmarish blaze ravaging a woodland with billowing smoke so thick it blocked out the sun.  Crimson light reflected above while orange wildfires roared around her.  In the distance she could hear blood curdling screams for help as animals ran for dear life.  Julia ran toward the screams, and found a man trapped under a fallen tree while his wife, and two kids tried to lift it off.  Nearby their house was consumed with violent fire, as trees continued to fall about after their trunks were burnt.  He pleaded with them to save themselves, and leave him behind.  They finally decided to leave, and the mother, and her kids got into a mini van, and sped down the dirt road.  However it was too late.  A behemoth line of flames engulfed the roadway. The woman floored it as her kids cried in terror.  Then Julia saw a tree fall on the car in the middle of the fiery inferno, and the all hope was lost.

Julia then directed her mind to fly her up into the air so she could get a birds eye view of the flaming devastation.  After looking at a number charred unreadable street signs she finally found a town sign that said “Conifer”.  She could tell by the landscape that she was still in Colorado.  So the hell on Earth was taking place in Jefferson County which is a few counties away from Comanche County in which her current location of Woodland Springs exists.  At that moment she jolted awake in a cold sweat, and looked up the various phone numbers for Jefferson County Colorado authorities.  Each call either received a laugh or assurance that there was only a controlled wildfire going on in the area.  She then gave up, and ran to the cafeteria in a deeply agitated state telling us of her horrific vision.  I immediately announced,”Okay team lets get down there, and take care of business.  Pack up, and be on the heliport in 20 minutes.  Hunter go get the Mysticopter, and we’ll meet you on the roof!”  Everyone scrambled out of the lunch room to prepare for fire fighting search, and rescue operations.  Hunter hopped into his Humvee and raced to the nearby Woodland Springs Airport to retrieve the Mysticopter, a souped up Bell 22 helicopter given to Mystic Investigations by a billionaire client.

Twenty minutes later we were all on the roof anxious at our pro bono mission at hand.  A minute later the Mysticopter landed a flurry of whipping winds.  We all boarded, and flew away into the skies headed for Conifer, Colorado ready for action.  Hunter Jackson piloted the magnificent Mysticopter while I rode shotgun co-piloting.  The helicopter raced ahead and within minutes gargantuan columns of smoke rose in front of us.. From above the devastation was remarkable as the roaring flames of orange and red raged through the forests below.  Julia still wasn’t getting any psychic data on the family she saw in her vision.  Hunter then said,”I got what appears to be a group of deer trapped in the fire on infrared radar.”  I then replied,”Bring us in low, and I’ll clear a trail for them with the CO2 cannon.  I activated the cannon which let loose a sonic burst of carbon dioxide, and the hellish inferno was eradicated from a narrow path leading to a dirt road.  The deer dashed down our opening to freedom as we flew away.  Our bionic boy wonder, and supernatural technologist Zack Powers yelled,”Awesome!” because we rarely get to see the Mysticopter in action since it doesn’t tie into our cases that often.

We then spotted a line of five cars stopped in front of a whipping wall of fire in the roadway ahead with a line of blazes forging forth in back of them.  We swooped in, and fired up the carbon dioxide cannon while our powerful helicopter blades help push back some of the flames as well.  The grateful motorists honked their horns as they speed down the roadway we cleared.  Zack then said he could hear a girl screaming in his bionic ear.  He directed our air fortress to the location, and we saw a small girl high up in a tree clinging to the trunk for dear life on our cam.  She cried for her mommy to help her amid the thick black smoke which caused her cough in between her pleas for assistance.  Drake Alexander whipped the door open, and leaped to the ground from thirty feet in the air.  Despite the sun he was safe due to the thick smoke cover.  Drake then raced to the tree, jumped up several feet to the branch the girl was on, and grabbed her.  He leaped down, and we dropped a ladder down to him.

Once on board we put a blanket on the girl, and gave her some water.  She was a blond haired girl who appeared to be six or seven.  She said she’d been playing in the woods alone when the fire struck.  We asked the girl where she lived and then we flew about a half-mile north to a large two story log cabin blazing like a bonfire.  Julia Hathaway sensed there a feminine presence still barely alive inside.  We fired the CO2 cannon at the house but it was out of ammo.  Rebecca Abernathy jumped from the helicopter twenty five feet in the air, and yelled , “Mystic Sphere!”  A neon pink orb of energy materialized around the witch, and she floated down crashing through the flame ridden roof of the cabin.  Once inside Rebecca couldn’t see a thing due to the thick black smoke, and flames.  She was protected within her magical pink bubble.  She then called unto her coven,”I call upon my sisters within my sacred coven.  Guide me to our fellow female whose trapped within these fanning flames of fury.”  The collective power of the coven then gave her the ability to sense the woman down the hall in the room on the left.  Rebecca’s sphere flew to the woman, and she pulled her inside.  Rebecca then flew up crashing through what remained of the roof, and back up to the Mysticopter.  Once inside we discovered the woman was dead.

The sweet little girl cried as she clinged to her sheet white lifeless mother.  Drake then exclaimed loudly,”Not on my watch dammit!”  Julia pulled the girl away as Drake bit into his wrist, and dripped his vampirical blood into the womans mouth.  Vampire blood is known for it’s curative properties.  I began CPR heart compressions, and Rob Edmunds pumped oxygen into her.  Rebecca then screamed,”Clear! Electrica concussa potestatem!”  Her hands then gave off a golden electrical energy mimicking a doctors emergency defibrillator.  She shocked the woman three times before I excitedly exclaimed,”We have sinus rhythm!” as I observed the electrocardiogram.   Seconds later she began coughing as the vampire blood took effect.  Julia fought back tears as she held the little girl, and gleefully said,”Your mommy is alive honey!”  The little girl crawled to her mother lying on the helicopter floor as we knelt around them smiling at the lives we had saved.  I then told Hunter to fly to the nearest medical center ASAP!

We landed in a hospital parking lot, and carried the woman into the ER.  As we headed back to the helicopter a police officer said we couldn’t just land our helicopter here.  I then said,”Hey pal we’re saving lives here!”  He then shot back,”I don’t think so pal!  I’m detaining all of you, and ordering you to shut down that illegal unmarked helicopter.”  Drake our lawyer then stepped over, and said the officer had no right to detain us.  The officer then took out his gun, and yelled,”This gives me the right to detain you jackass!”  He then talked into his radio saying,”11-96 11-56 requesting back-up!  Everyone on the ground, and shut that damn helicopter down!”  I then said,”What the hell is your problem?”  He then replied,”Comply with my lawful orders or face the consequences!”  Rebecca then walked  up to him, and asked if he was on meds or perhaps off his meds.  He put the gun right in her face, and she screamed,”Mystic Sphere!”  The pink sphere appeared out of thin air around her, and erupted right into the officer sending him flying ten feet on to the pavement.  Drake then bellowed,”Let’s get the hell out of here!”  As we rose into the air the officer got up dazed, and shot at us.  We laughed as the bullets bounced off the bullet proof hull.  I then mentioned how lucky it was we flew around in an unmarked helicopter.

We sped back to the wildfires to continue our volunteer rescue mission. Julia suddenly got a vision replaying her first vision that initiated our quest.  She now knew exactly where we had to go to save the family in her nightmare.  We landed the Mysticopter near a one story ranch house on fire.  It was the house in Julia’s vision.  We ran up just as a guy came out holding two kids.  He set the kids down, and screamed,”Where’s your mom!  She was right behind us!  At that moment a tree burning nearby began to fall.  It would have landed on the man if not for Drake catching it.  The was shocked not only by the near miss of the massive foliage but the raw awesome power of Drake as he held the tree at bay with one hand.  He then launched the tree away into the woods.  Rebecca, and I ran inside at that moment to find the mother nervously packing up photos, and other keepsakes.  She grabbed up the box, and we all dashed outside as a beam nearly collapsed on us.  The whole family then hugged as Julia breathed a sigh of relief now that her vision had been resolved.  Our entire group flew to safety, and we dropped the family off near a hotel.

Our fantastic flying fortress took off, and headed for more trouble.  Rebecca’s cell phone rang, and it was her sister witch, Samantha, from her coven calling.  She said the coven was meditating after Rebecca called on them mystically for power.  The Goddesses informed them that the wildfire were the product of a rare Phoenix Firebird.  The infamous variety of supernatural bird composed of unholy flames that rises from the ashes when it dies.  This could be the plausible explanation for why the local authorities informed so few people about the fire.  Federal authorities may have been hunting the bird, and ordered the local government to stand down  Unfortunately the government has a negative track record when it comes to dealing with the supernatural.  They either refuse to acknowledge the existence of the metaphysical or handle it in an improper manner.  That’s why it’s up to us in the private paranormal community to take down the nefarious beings that threaten humankind.  Now our mission turned from normal rescue to paranormal hunting.  It’s a race against the clock to take down this firely fiend before he costs countless lives!