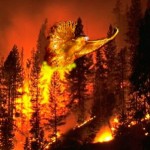 The recent spread of out of control and extremely hard to fight wildfires in Texas, California, Idaho, and Oregon are not merely a result of dry conditions but are the handy work of infamous firebirds known as Phoenix’s.   A powerful wizard was recently taken down by the forces of good but unfortunately the evil bastard released at least a dozen Phoenix’s he had caged for magical purposes.  They were the most coveted type, nearly 1000 years in age.   The Phoenix is a magical supernatural bird composed of inert unholy flames that can’t be seen by the human eye.  To humans they appear as unusually bright colorful birds of blazing gold and scarlet colors that glow in the dark.  The firebirds cry is thought to be one of the most beautiful and beguiling natural melodies on Earth.  The flames that compose the amazing avian are usually confined to it’s body structure and don’t spread to trees, and other objects it may land on.

Unfortunately as the Phoenix nears the end of it’s 1000 year life cycle it builds a nest made of special twigs in which it roosts.  It then spews forth flames upon the next causing it to be engulfed in active unholy flames which appear to be a normal colored raging blaze rather than the usual black flames associated with holy fire.  Natural sources of holy fire tend to appear a normal color rather than the usual magically created sources.   It and the nest are reduced to ashes and then the Phoenix rises from the remains young and powerful again composed of active unholy flames.  It stays in this fiery form for 13 years before the flames revert back to an inert form.

A number of the released Phoenix birds are responsible for setting off the various wildfires you’ve heard about in the news.   In addition they set off more fires as they fly about in their flaming form.  Firefighters are finding it so difficult to contain the hellish blazes because unholy fire doesn’t respond to normal water.  Holy water must be doused upon the hell fires along with control lines of holy flames to contain the fire.  In addition forces of pure goodness who touch the flames have the power to extinguish them or even turn them into holy flames.  A powerful Priest can also bless the flames and reverse them into holy flames.  Holy fire would then regenerate the scorched plant life and even possibly resurrect dead animals.

It’s imperative that you inform your local government officials and firefighters of this important information to finally halt these beastly blazes.  We call upon all our friends in the supernatural community to marshal your magical forces and travel to the wild fires in order to extinguish their destruction across our great nation.  We also need to capture these escaped Phoenix’s and contain them within silver cages.   If you spot a firebird we suggest calling your local paranormal investigations firm.  Apprehension on your own is not wise.  However if you’re able to bless your fire hose then by all means attempt to douse the blazing beast with holy water.   Remember that unholy flames shouldn’t burn you as long you don’t believe in it’s power.  However if you have any type of paranormal power, you are susceptible to being burned by holy fire.  Don’t be lulled into submission by it’s beguiling firebird song!