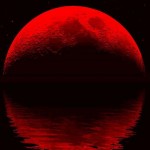 What normally would be the peaceful April Pink Moon of Easter will be a blasphemous Blood Moon Total Eclipse on the early dark morning of April 15th.  It will begin in the Witching Hour, and continue right through the Devil’s Hour in certain parts of the Western Hemisphere! This special Blood Moon is the first in a series of four consecutive Total Eclipse Blood Moons known as the terrifying Tetrad.  The other three Blood Moons will occur on October 8, 2014, April 4, 2015, and September 28,2015. A Tetrad amplifies the power of the Blood Moon by four times for each Moon as they have a mystical lunar connection that extends into the past, and future.  In essence the Tetrad in one bad Mother of a malevolent Moon created by demonic, and human practitioners of dark magic to further their continued agenda of chaos, human suffering, and global domination.  Just another effort to push forth the battles of Armageddon gaining steam in the coming final War to end all holy wars.  Despite this human science explains the Tetrad as celestial coincidence, and the Blood Moon’s red color a result of Earth’s atmospheric edges scattering sunlight upon the Moon sunset style.

Matters have also been made worse by the planet Mars being closer to Earth than it has been in six years.  Mars will appear near the eclipse being in rare mystical alignment with the Sun, Moon, and Earth thereby channeling magical Martian energies through it.  Practitioners of magic will use this for both good, and evil purposes.  In addition this will give Mars, the Roman God Of War, a temporary power boost on Earth.  He has been prophesied to visit here in an effort win back his true love Venus, the Goddess Of Love, currently beguiled by her half-brother Mercury along with the God Of The Solar System Jupiter.  This nefarious Godly trinity has been on Earth since the Jupiter Triangle of May 2013.  Still looking to destroy Zeus, and Goddess Gaia out of jealously, and Jupiter’s selfish need to assert authority over all Earthly Gods.  The trio has been low key since their plans were thwarted last year by the forces of good despite the power of the Jupiter Triangle.  There have been rumors of them joining forces with the Devil who is currently bound to the Earth after his defeat at the First Battle Of Armageddon.  However the Devil has always felt a hatred for the Gods.  It’s thought that the God Mars could finally break up the Jupiter Trinity, and end their threat.  We have seen quite an increase in Mars worship.  However Mars is still a God of War that relishes in seeing violence, and chaos so expect his presence to amplify Blood Moon supernatural activity.

Practitioners of magic will be able channel the power of a full month of every Moon phase due to an eclipse simulating just that in mere hours.  Witches call a total eclipse a Micro Month since all the Moon phases from full to new are seen in a short time. This can make dark witches, warlocks, wizards, and sorcerers even more dangerous than usual.  That’s on top of the magnified Blood Moon powers.  Especially if they’re deep into the demonic worship.  Those who also call upon Mars, the God of War, will be beyond powerful tomorrow morning coupled with the brunt force of the Witching & Devil’s hour!  On a positive note the good practitioners of magic can channel the power of the Eclipse as well.

With the Devil’s failed attempt to father the Anti-Christ on the Halloween Blood Moon of 2013 he will most likely try again during on of the Tetrad Moons.  Such an unholy event requires the Sanguine Moon, and a special ritual presided over by dark magicians.  Expect many dark mystical rituals to take place around the world, and be on the look out for zombies rising from their graves.  This is often a trademark of extreme dark magic being practiced in the vicinity.  Take care not to fall prey to these nefarious figure often seeking innocent victims as sacrifices to their dark Lords.

The blood red Tetrad Moon will wash amplified rays of unholy light upon the dark shadows of the night.  This will increase the powers of a great deal of evil entities.  Especially those with demonic DNA.  The supernatural blood rays will be intense enough to temporarily drive away Angels, and other entities of light from the Earth.  However it’s thought some will retreat to Santa Claus, a very real Demi-Angel, and his North Pole sanctuary since the holy Star Of Bethlehem shines bright 24-7 there which will neutralize the unholy sanguine light.  Also be aware that holy artifacts used to fight the forces of evil could be neutralized.  Especially holy water exposed to the bloody light.

Although the lunar eclipse dampens lunar forces at the point it’s least visible the special Tetrad Blood Moon will still cause the dreaded Blood Fever in vampires along with enraging, and strengthening a number of other paranormal creatures.  Even those supernatural friends you would normal trust can’t be trusted during this time.  The most dramatic change will be seen in Werewolves who will de-transform during the mid point of the eclipse.  Unfortunately they will maintain their monstrous Lycanthrope persona, and continue to hunt down humans along with anything else that moves.  When these people are caught they are labeled serial killers, or mentally insane in nature.

The simulation of a new Moon along with the general unholy light of the Blood Moon will bring the hellish Manticore out.  If you thought Werewolves were a nightmare then meeting a Manticore will make you think of Werewolves as puppies!

In the end it’s the Easter Bunny who gets the shaft in all this metaphysical madness because the Blood Moon neutralizes the hell out of the normal Pink Moon of Easter.  This year the Full Moon fell within a week of Easter.  If not for the Blood Moon it would have been a lucky Easter Egg Moon that would have radiated the full good will imbued in the Spirit Of Easter.  More or less the Pink Easter Moon is canceled this year.  We feel bad for the worlds only Werehare but fear not for he has never been halted in his Easter activities.  He won’t let the children of the world down!

Hell is going to break loose tonight just as if it was Halloween! Remember that even after the mere hours of the eclipse are over the negative energy of the Blood Moon will linger in the Full Moon.  Even if the Moon doesn’t appear crimson anymore don’t let your guard down! It’s still the Blood Moon! We recommend staying indoors with all manner of religious artifacts protecting doorways, and windows! Stay safe this Easter, and be ready for anything during these dangerous paranormal times!

What Is The Appearance Of The Total Lunar Eclipse?