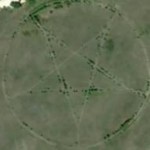 After the initial reports of nefarious activity we’re here on the site of the Devil’s Pentagram near Tobol, Kazakstan inside the mobile command RV owned by Zhang Xu of Xu Paranormal Associates based in China. We’re also here with our associate from India who we’ve worked with in the past named Raj Acharya who has a Metaphysical Investigations company in India. Mystic Investigations is one of several teams that have converged here to stop the Satanic ceremony that will resurrect the Devil followed by a dark ritual to father the Anti-Christ. There’s at least 500 paranormal professionals here, and we observed a dark crowd on the Pentagram grounds complete with a stage, unholy altar, and large torches flaming forth. We witnessed the ceremony beginning, and saw several human hostages clearly meant to be sacrifices. So we decided to move in, and engage the forces of evil. We had them completely surrounded by paranormally trained humans, white witches, wizards, and even the great Sorcerer Ian McTavish. There were also other good paranormal beings from around the world looking to stop the course that will lead to Earth’s damnation. As we saw the whites of their eyes by the light of the torches on this overcast night. A small patch of clouds mysteriously dissipating to reveal the crescent Blood Moon of Halloween which is indeed blood red here. What appeared to be the chief Sorcerer, and high Priest of this ceremony stood on the stage with a Sorceress as they both laughed in a maniacal manner causing the rest of the dark denizens standing on the Pentagram to do the same. The Sorcerer then bellowed forth,”You pathetic fools are no match for the dark master! You have chosen the wrong side! Darkness will prevail, and the Universe will be ours! Pater nocti voco. Praesidio satanica pallium.” At that point an eerie green fog rose from the ground accompanied by the oddest guttural sound I ever heard. Some of the practitioners of magic dissipated it rather quickly only to find that the entire ceremony site, along with the participants, had disappeared leaving only the Pentagram etched into the Earth. We scrambled across the Pentagram but not a trace of anything could be found.  It’s most likely a powerful cloaking spell that’s putting them slightly out of phase with this reality. Everyone here is currently working on breaking it. I had wondered how they were going to perform this insane ritual with all of us coming here. We also tried to destroy the Pentagram itself but the Earth can’t be budged on that spot by any means physical, or magical. It’s almost 10:30 PM local time here in Kazakhstan so we’re about an hour, and a half from the Halloween witching hour. We’ll keep you updated on the serious situation developing here!

One Reply to “Trouble At The Devil’s Pentagram”