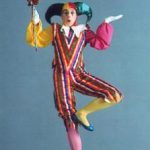 The mischievous April Fool of April 1st, the master of paranormal pranks, is about to make his centuries old annual planetary pranking rounds upon humanity.  Since 2011 The April Fool has been personally gracing Mystic Investigations with his presence by vandalizing our website, and pulling practical jokes on our team members.  All of which are thankfully harmless for the most part, and not permanent unlike the truly malevolent April Anti-Fool who makes his abominable appearance on April 2nd.  The April Fool’s origins are thought to lie in the Norse Trickster God Loki but complete evidence is lacking thus far.

The April Fool’s trademark giggles are unmistakable, and are the precursor to the plight of being pranked.  Embarrassing people fuels the malicious merriment of his harlequin heart, and only makes him supernaturally stronger.  If faced with his cackling clowning on April Fool’s Day it’s best to respond by laughing at yourself.  This will diffuse some of his joking joviality, and possibly prevent the Fool from plaguing you with further pranks. Donning displeasure, anger, and embarrassment will only egg him on further.  Unfortunately in the heat of the moment some of us here don’t take our own advice.

If you’re someone easily mortified by such blatant buffoonery, and you wish to avoid these 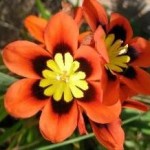 supernatural shenanigans then there is something you can do.  The only known effective deterrent for the April Fool is the Harlequin flower, aka Sparaxis tricolor.  Having the flowers strewn about your home, and worn on your person has displayed delightful repellent properties.  Although naturally growing plants are best.  Harlequin essential oils, colognes, and perfumes are terrific defensive tactics to use against the April Fool.  Offensive measures include incorporating the flowers essence into holy water or even unholy water to literally spray at the joking jester if you’re able to spot him.  Although not demonic in nature the holy waters purity will aid in repelling him as his supernatural heart does have a minor malicious intent.  Unholy water could possibly target his jovial joking nature that doesn’t want to hurt anyone physically, or scar someone for life mentally.

have been known to endear the April Fool to a potential prank victim.  Particularly children but the Fool rarely visits his special brand of tomfoolery on kids unless they’re really rotten bully types.  Those who join in the April Fool’s revelry with their own pranks can sometimes avoid the wacky wrath of the festive Fool.  Although there is a fine line where he’s tempted to turn the tables on the joker in order to give them a taste of their own mischievous medicine.

We here at Mystic Investigations are battening down the hatches as we anticipate our annual visit from the April Fool.  Despite our countermeasures the April Fool somehow strikes against us each year. We apologize in advance for any disruptions to our website, along with anything found to be offensive, tomorrow.  With the Amazon Warrior Adonia being our guest for the past handful of days it will be interesting to see if he dares to mess with her.  Especially considering the Goddesses Amazon women have in their favor.  Perhaps this year the April Fool will leave us alone!