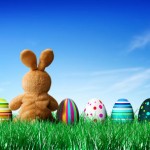 The Easter Werehare, aka the Easter Bunny, has begun making his global rounds of Spring merriment.  Children around the world will find artificial hollow colorful eggs made of various materials with gifts of candy inside left by the Bunny, or parents infused with the Spirit Of Easter.  Unlike Santa Claus the Easter Bunny can get away with leaving anonymous eggs in outdoor yards mixed with what the human adults have hidden.   Since nobody would really question this the Easter Bunny avoids a blatant violation of the Supernatural Secrecy Pact.  Santa Claus on the other hand can only leave gifts for members of the supernatural community who know of his true existence.  There would be too many questions if he entered everyone’s home, and left presents. Although he will leave gifts for a special few boys, and girls outside of paranormal circles.  Just enough to stay below the radar of watchers in Heaven, and Hell.  Like Santa Claus when it comes to the supernatural community the Easter Werehare leaves special gifts for both adults, and children.  The paranormal adults especially deserve awards of recognition for their battles against the forces of evil.

However first, and foremost Easter is about children which is the underlying supernatural subject of most holidays.  The mass marshaling of kids magical innocence into a non-sentient collective consciousness that ends up being the spirit of any given holiday.  The giving of gifts to increase happiness in children thereby increases the power of the spirit.  The magical force of this spirit is used as a counterbalance against the forces of evil always fighting to control this planet, and plunge it into a pit of paranormal darkness.

The Spirit Of Easter has been dampened quite a bit this year due to the Tetrad Blood Moon falling so close to Easter.  Thankfully the Easter Bunny refuses to let this stop him from eagerly spreading ecstatic Easter elation throughout the Earth. As the Bunny hops around the planet at super speeds, coupled with magical bunny trails, and metaphysical bunny wormholes, the first spring flowers will bloom forth along his path.  Just as the first green shoots blast from the winter thaw thanks to Leprechauns skipping about on Saint Patrick’s Day.  Naturally the rest of the fantastic flora is made possible by various nature Nymphs, Gods, and Goddesses.  The Easter Bunny is also known to possess resurrection powers that allow him to raise the dead so as long as they haven’t been deceased for more than 3 days.  Clearly a Heavenly power granted to him by the overlying purpose of Easter which is the resurrection of the Omniversal Demigod Jesus.  Urban legends of children coming out of comas, or being miraculously brought back to life, in hospitals after spotting a bunny nearby increase greatly this time of year!

rabbit of any color he so

chooses.  As a Werehare he can also transform into human size bipedal humanoid rabbit creature.  In this form he appears in the odd border zone of disturbing, and cute combined which isn’t easy to achieve.  This is how he will appear in malls, amusement parks, and parties where he mingles with the general public in the same way Santa Claus poses as a mall Santa during the Christmas season.  Believe us when we say you will know the difference between a mall bunny, and the real Easter Bunny! Unfortunately due to a magical curse he can only appear in his original human form on Christmas Day thanks to his Angelic friend Santa Claus.  The curse is courtesy of the Anti-Claus, and his coven of powerful witches.  This was many centuries ago, and there were rumors of a visiting Sorcerer from outside the Omniverse (our collection of Multiverses, aka parallel Universes) having a hand in the curse. This would explain why Santa, a Demi-Angel calling upon Enochian Angel magic, has been unable to break the Werehare curse past one day a year.  The entities we know as Angels only exist in this particular Omniverse which is also a God.  Anything from outside that would be an unknown entity along with the fact that God likes to play out as many mathematical probabilities as possible.  Hence the existence of the Easter Bunny.  Have an Eggstatic Easter and a Sunny Spring!

Would you like to be the Easter Bunny?  In some other parallel Universe you are, and you can channel your bunny self in that reality through a unique creative visualization process known as Quantum Jumping.