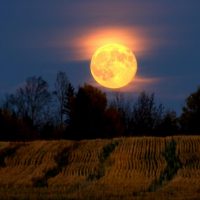 The Harvest Moon of September is sometimes called the Pumpkin Moon due to the almost orange hue it may have. This large low lying Moon is Mother Nature’s gift to farmers as they go about the titanic task of harvesting their final crops of the Summer season.  The extra bright Moon allow for nocturnal agricultural activities during the several nights of it’s apparent fullness to the human eye. Unfortunately large Moons give us increased metaphysical lunar energies which supercharge the already existing danger of Werewolves.  Most of these loathsome Lycanthropic individuals transform in response to these enchanted energies that exist whether the Full Moon is completely visible or totally shrouded by clouds.  This monstrous manifestation can occur at as little as 80% of Full, and up. Over time a Werewolf in human form can develop a resistance to the mystical Moon, and even someday transform, and de-transform at will.  If the Moon even looks somewhat full always be on alert for these nefarious nocturnals!

Each month the Moon’s powers can fall under various Lunar Gods, Goddesses, and other 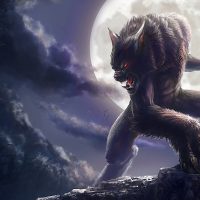 supernatural influences.  The Harvest Moon is a steadfast Moon with a stable faction of pro-agricultural Gods behind it.  This particular incarnation of the Full Moon instinctively draws Werewolves to farm fields, or simply open fields if no farms are in vicinity.  Normally they’re drawn to wooded areas unless humans happen to cross their scent path!  This behavior is quite a threat to farmers who may be out in the fields. Especially since the power of this Moon repels the holy solar rays to an extent.  This mean Werewolves may roam about at sunset, and even into the early sunrise!  They are only highly repelled by the sun unlike vampires who will burst into flames, and die in holy light! These bloodthirsty beasts will not hesitate to devour any humans or innocent farm animals in vicinity! Even large Bulls aren’t safe! If nobody is present they will destroy crops, and actually end up creating crop circles with demonic symbols in them.  A sub-conscious reveal of their demonic roots detailing their paranormal genetic code in the Devil’s language.  The rest of the year crop circles are usually the work of Extraterrestrials marking their territory for future alien invasion forces!

Werewolf Repellents & Defenses
People are usually safe at home so we recommend avoiding outdoor activity between dusk to dawn at least until the night of September 20th just to be safe!  If this isn’t possible then we urge you to take precautions against a Werewolf attack. The least you can do is wear extremely bright neon colors, and carry a flashlight.  A strobe light is

especially useful. Interestingly these things confuse them, and cause them to flee if they’re not particularly agitated. However never rely on just that!  Get a squirt gun or super soaker loaded with holy water from your local church or Wiccan High Priestess. In fact religious artifacts of any type will have repellent effect against Werewolves due to their demonic DNA.  Christian symbols tend to have more power because more people believe in said religion. However your own beliefs have a huge bearing as well, and are the most important thing when looking to deflect any type of demonic denizens of darkness!  In addition priests, and practitioners of magic calling directly upon Gods, Goddesses, or even Angels for power will see even greater results!  Silver in handy jewelry form is a wonderful countermeasure that can join forces with religious symbology as well! Mother Nature also provides a repellent in the form of the herb Wolfsbane which can be mixed with holy water for a double Werewolf whammy!

Those in the Werewolf Hunting game are often faced with split second life, and death decisions. Sometimes repellents aren’t enough for a deeply enraged Werewolf under the influence of an especially powerful Moon such as the Blood Moon!  Here at Mystic Investigations we strive to incapacitate, capture, and contain until sunrise.  After all these are real people with family, and friends. They didn’t ask to be given the Lycanthrope Virus, and be damned to this blasphemous transformation!  Unfortunately if one’s life is in danger or others are about to fall prey to the fangs, and claws then we must put down the rabid wolf via silver bullets, arrows, and other sharp implements!

What Is The Effect Of The Penumbral Lunar Eclipse On Werewolves?
There is a positive note for the Far East, Extreme Eastern Europe, Russia, and Africa. 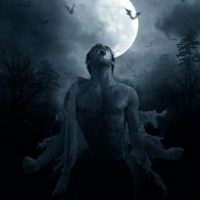 There will be a Penumbral Lunar Eclipse which casts the Earth’s shadow upon the Moon. This type of eclipse actually dampens the lunar energies, and calms Werewolves down quite a bit.  Thankfully there should be less attacks upon humans, and pets in those regions.  A Total Eclipse actually transmutes Werewolves back to human form yet they maintain their mindless flesh craving persona intact.  These unfortunate individuals caught in the act of mutilating others are branded as serial killing loons, and end up being locked away in prisons, and mental hospitals. However by the next full Moon they escape, and government agents swoop in for the cover-up!  Still they are fugitives on the run who can never get their life back ever again! Well what little they may have had dealing with their monthly monster curse!  Stay safe, and enjoy the beguiling beauty of the Full Harvest Moon as alluring Autumn fast approaches on the road to Hallowed Halloween!