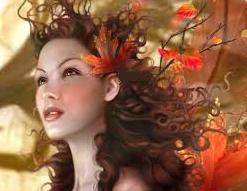 The lush leaves have begun to show the first glimmers of color with the start of Autumn this morning in the Northern Hemisphere.  This signifies the arrival of your local area Autumn Nymph from her dormant state, and previous to that her wondrous works in a zone within the Southern Hemisphere where it was Autumn.  An Autumn Nymph is a low level Goddess that is the personification of the Autumn season who’s responsible for the manifestation of Fall.  She also directs lower nature deities such as Fall Fairies, and Autumn Elves. You didn’t really think the seasons, or the various forces of nature, happen on their own did you? 🙂  Even before Autumn officially begins the Autumn Nymph makes contact with the Summer Nymph to begin the transition to a new season.  You may be lucky enough to spot her in remote rural areas during the Fall season.  You may catch a brief glimpse of her in a transparent specter form or physically manifesting in a swirl of Fall foliage.  She is always a strikingly beautiful woman with hair that is usually in the crimson hued range clad in colorful leaves.

Local covens of witches often have ceremonies welcoming her back hoping for a wonderfully warm season with a bountiful harvest, and long lived leaves of brilliant iridescence.  The Nymph is one of many beings practitioners of magic try to curry favor with so they can draw upon them for magical power.  Deities such as the Fall Nymph likewise will require the power of human souls in times of exceptional need.  Generally when the forces of darkness attempt to meddle in the affairs of Mother Earth. The Autumn

Mabon is first supernatural shot across the Halloween bow as equal parts of Autumnal Equinox light, and dark signify the tug of war between good,

and evil.  Both White & Dark magic practitioners celebrate Mabon in their own ways.  Dark Witches partake of diabolical demonic rituals perverting Mabon, and the Equinox while Witches of the light seek harmony with humans, and Mother Nature.  They celebrate the natural cycle of the seasons, and the bounty of the mid-harvest in preparation of the winter season.  The Good Witch’s yearn to commune with Autumn Nymphs, Fairies, and Goddesses, while the Dark Witches attempt to corrupt the Nymph, and other deities into joining the dark denizens of demonic Hell.   Their ultimate goal is to corrupt, and command Halloween until the final battle of Armageddon decides who will rule over the Earth, and humankind. 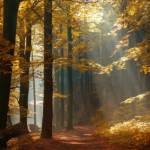 From this point on until Halloween there will be a general steady increase in paranormal activity on all levels along with various supernatural skirmishes between practitioners of magic vying for ultimate control over Halloween, and humankind.  Halloween is the only holiday where both the forces of good, and evil equally marshal their powers.  It is what keeps these forces in balance throughout the year.  We suggest steering clear of remote rural areas, particularly deeply wooded, during the Equinox along with the entire Halloween season.  Many hunters, and hikers, have learned the hard way when they accidentally stumble upon a coven of dark witches or warlocks taking part in horrific demonic sacrifices.  However some have lucked out when happening upon the gentle scantily clad ceremonies of good witches, or an Autumn Nymph bathing in a stream with some Water Nymphs….Oh My! 🙂