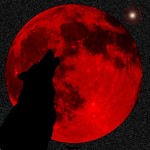 The deadly October Blood Moon of Halloween, sometimes referred to as the Sanguine Moon, is now upon us.  The sheer supernatural force of The Thirteen Nights Of Halloween has already enraged many a paranormal creature as activity continues to exponentially increase.  Even worse it’s metaphysical power is still linked to the series of four Tetrad Blood Moon’s over the last two years thereby making this the fifth Blood Moon in a row! The Blood Moon madness only magnifies the chaos taking place during these dark nights of damnation.  This includes metaphysical beings of a non-corporeal nature including ghosts, poltergeists, demons, and more!  For most supernatural beings the effect is minimal until he Moon reaches 99% of full.  The full Moon itself will be on October 27th.

The Moon will actually appear crimson to varying degrees in certain areas for various natural atmospheric, or magical reasons.  In some cases the scientific reason will be light scattering properties of atmospheric particles effecting the low lying moon.  In reality demonic forces of evil from higher dimensions send bloody energy rays to wash over the moon in order to herald the up coming evil of Halloween.  This dark energy only becomes visible once activated on Earth for varying reason.  Past, present, or future violent paranormal activity, or practitioners of magic may activate the Blood Moon color which makes it even more paranormally potent.  Even if it isn’t red in your area the supernatural beings can still feel it’s effects so don’t you dare relax, and think all is well!  In addition some say that the actual surface of the Moon will run red with blood during Armageddon, or a major global Apocalypse brought on by the supernatural world.

If the Moon above appears blood red then hell is about to break loose.  We suggest getting indoors immediately, and surrounding yourself with every religious artifact you can along with any weapons you may have!  If the Moon almost appears black then this is the deepest color of red known to humankind known as Sangoire.  A rare Sangoire Moon means that a major blood bath is about to occur in your immediate area.  You need to get in your vehicle, and floor it the heck out of town at supersonic speed if possible!

Werewolves will be effected by the Blood Moon from 80% of full, and above.  There is increased aggression, and strength.  They become more brazen, and venture into heavily populated areas.  In addition if they bite someone then that human will transform into a full on Werewolf within an hour.  Usually they won’t transform until a month later at the next full Moon.  So we see a great increase in the number of Werewolves rampaging about ready to rip apart any living thing it comes across.

Vampires will suffer from the Blood Moon Fever when the Moon is at least 99% of full.  Those vampires who are normally reserved, and cautious in the fruition of their blood lust will risk exposure, and violently go after any prey they’ve focused on.  Anger within them can be set off over nothing, and they will see an increase in their overall powers.  Younger vampires will turn into mindless killing machines like that of Werewolves.  Those of you who know vampires might consider staying away until the Blood Moon is over.  In fact if they’re really a friend they’ll insist you stay away for your own safety.  Some vampires will be required to be locked away during this time in the same way responsible Werewolves do the same.

Zombies will still mindlessly chase you down to cannibalize you but now they will have an extra spring in their step with a fair increase in strength.  In addition they will go after anyone wearing red more aggressively than anyone else.  If red is your favorite color then give it a rest if the Moon is 99% of full or actually appears red in the sky.

Just about every supernatural being will see an increase in powers during the Sanguine Moon along with negative emotional effects.  If you never shy away from the night with the knowledge of the paranormal in hand then this would be the one time of year you would want to barricade yourself indoors, and sleep with one eye open!  This is serious stuff folks, and you need to take the necessary precautions to prepare yourself for the unthinkable!