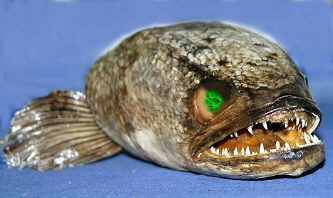 A mad scientist, named Lars Alsvik, has stolen various GMO fish parts from labs across the country.  These genetically modified fish are already considered dreaded notorious Frankenfish!  However the mad scientist Lars has stitched the various parts together and reanimated the new fishy corpses to create a blasphemous breed of darn deadly Frankenfish that lusts for human flesh first and foremost, but will viciously rip apart any living thing with grand glee!  Lars has recently maliciously released his creations in various lakes, ponds, rivers, and streams across the North American continent.  Some say he works for a clandestine organization run by top flight royals, and plutocratic elites, who wish to geoengineer this planet into their disturbing vision of dark reality.

There is evidence of some wayward wizardry in these paranormal puzzles that swim about various fresh water ways often forming killer packs.  Their

razor sharp teeth will shred any flesh within seconds and even powerful beings like vampires and werewolves are at risk from these all consuming monsters of watery mayhem!   The average size of these fiendish fish seems to be four feet long and they swim at lightening fast speeds to catch their perplexed prey.  They’ve even been observed leaping onto the shore to tackle victims and devour them on land before wriggling back into the murky depths!  Steer clear of any bodies of water that aren’t clear, and calm.  Suddenly violent waves in an otherwise small, and still pond, or lake indicate a potential danger afoot!

The Frankenfish are also killing off natural fish populations.  If they are not captured and contained they could very well wipe out all aquatic

life in the body of water they dominate.  Various teams of paranormal hunters and cryptozoologists are actively fighting to eradicate the Frankenfish.  Beware if the water glows green while taking a midnight skinny dip for it could be the luminescence of the green glowing Frankenfish eyes.  If you spot one, or a whole pack, we advise keeping your distance and calling up your local supernatural specialists to deal with this insidious infestation.  Don’t bother calling the police, animal control, or any other government agency because they won’t believe you or won’t have a clue what to do.  The ones that do handle paranormal issues are top secret and you will be unable to contact them.  For the most part private paranormal warriors are taking care of this pro-bono.  We are also actively seeking out the infamous mad scientist of evil, Lars Alsvik.

UPDATE: Lars Alsvik was captured by the US Paranormal Defense Agency on July 13th, 2016. However they turned around, and placed him in charge of his own FrankenAnimal project. It’s even rumored this is a ramp up for Frankenstein creation via body parts from corpses.  The hope is to create living dead super soldiers!