You may have already heard of the wondrous world of the paranormal hidden from the general public. Something seriously sanctioned under The Supernatural Secrecy Pact. A plethora of paranormal perplexities and creatures lurking among the dark shadows just out of your view. Sometimes you spot a hint out of the corner of your eye. However most dismiss anything they see and give it a logical explanation to fit their safe view of their reality. Still, some come into contact with this sometimes wayward world head-on! Others luckily meet the mystical serene side of those magical beings who dwell in the light. The most common interactions humans experience are metaphysical manifestations such as ghosts and other higher dimensional spirits. Beyond supernatural beings who move about and stationary paranormal phenomena, such as the Bermuda Triangle, are there local places in the secret supernatural community anyone can access?

A Plethora Of Paranormal Places Of course, there are paranormal places like Saint Nicholas’s North Pole City and magic schools such as the McTavish International Academy Of Magical Sciences. Naturally, these magical venues are cloaked from prying human eyes. Fortunately, most sizable towns and cities have a supernatural community composed of magical practitioners, enchanted beings, and various paranormal professionals. Their supernatural demand must be met and so there is an invisible world sewn among the stores, restaurants, and other establishments you frequent. Quite a few fall under the nefarious sounding umbrella of the Black Bazaar, aka the supernatural black market. Sometimes they’re cloaked or slightly out of phase with this Universe. Thankfully more often than not they’re merely tucked away in the woods, underground, in back alleys, or even in hidden rooms of places you go to every day!

Where To Find Supernatural Spots Rumors swill in smaller towns about such places but most dismiss them as the silly fiction of colorful kooks. Larger cities often have enchanted back

alley establishments in plain sight. Other times it’s just a plain unassuming door that leads to something quite extraordinary! Persistent searching will eventually lead you to this type of entry into the paranormal world. Most often specialty magic shops, taverns, and restaurants where supernatural beings can be themselves. There are also witches, warlocks, wizards, and sorcerers offering their services at a price. Some free for those in dire need. Always exercise caution when discovering such places as there are those who walk on the dark side. Those who may psychically sense fear and will feel freer to expedite their diabolical urges upon you in the hidden locations. In the general public, there is a fear of human mobs attacking, and public exposure that can bring down the wrath of more powerful entities. If you happen upon a real paranormal place just play it cool and imagine you’re a supernatural being to aid in blending in. If there aren’t many people there you shouldn’t stay too long as you will most likely draw attention by subtle cues you aren’t aware of! [Twitter]

A Classic Small Back Alley Where Supernatural Shops Are Often Hidden 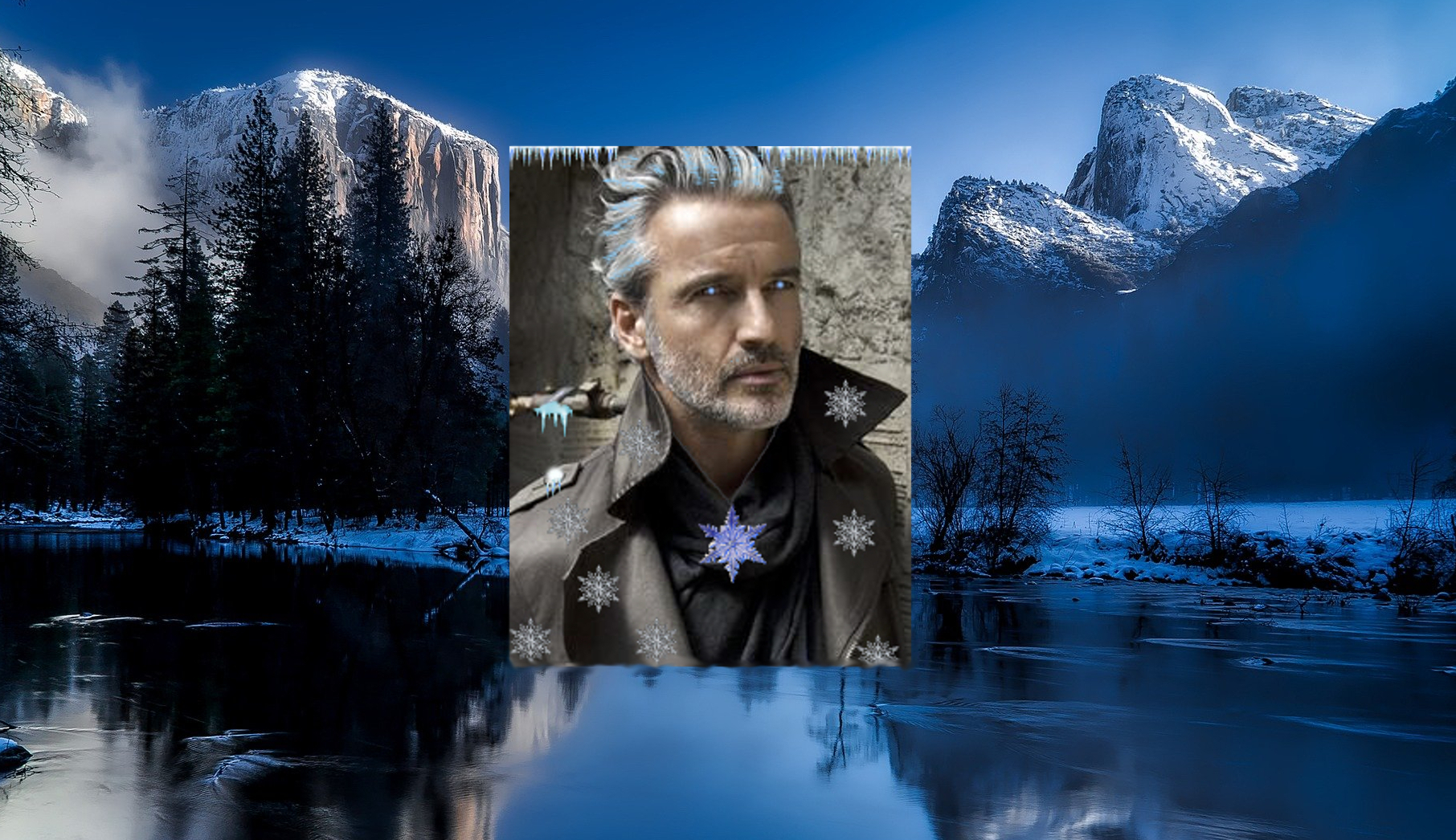 Jack Frost, sometimes called Old Man Winter or Father Winter, is the literal original personification of Winter on Earth.  This makes him the Chief Winter God, and Grand Master Of Cryokinesis on Earth. He was worshiped as a God by various human cultures over the ages under different names.  His birth over 650 million years ago triggered a global ice age called the Snowball Earth. He has also usually had some part in subsequent Ice Ages. Often coinciding with some manner of angst in his long often miserable life due to his glum outlook on his existence. Plausibly due to growing up without parents, and spending millions of years mostly alone along with the enchanted emotional translation of ice-cold itself. As with many Earthly Nature Deities, Jack was born spontaneously via the unintended interactions of various forms of consciousness on a variety of dimensional levels. The exact catalyst is unknown but we do know that the mind of the Omniverse God on a sub-conscious level creates living personifications, or lower god-like entities, of virtually every thought he has! 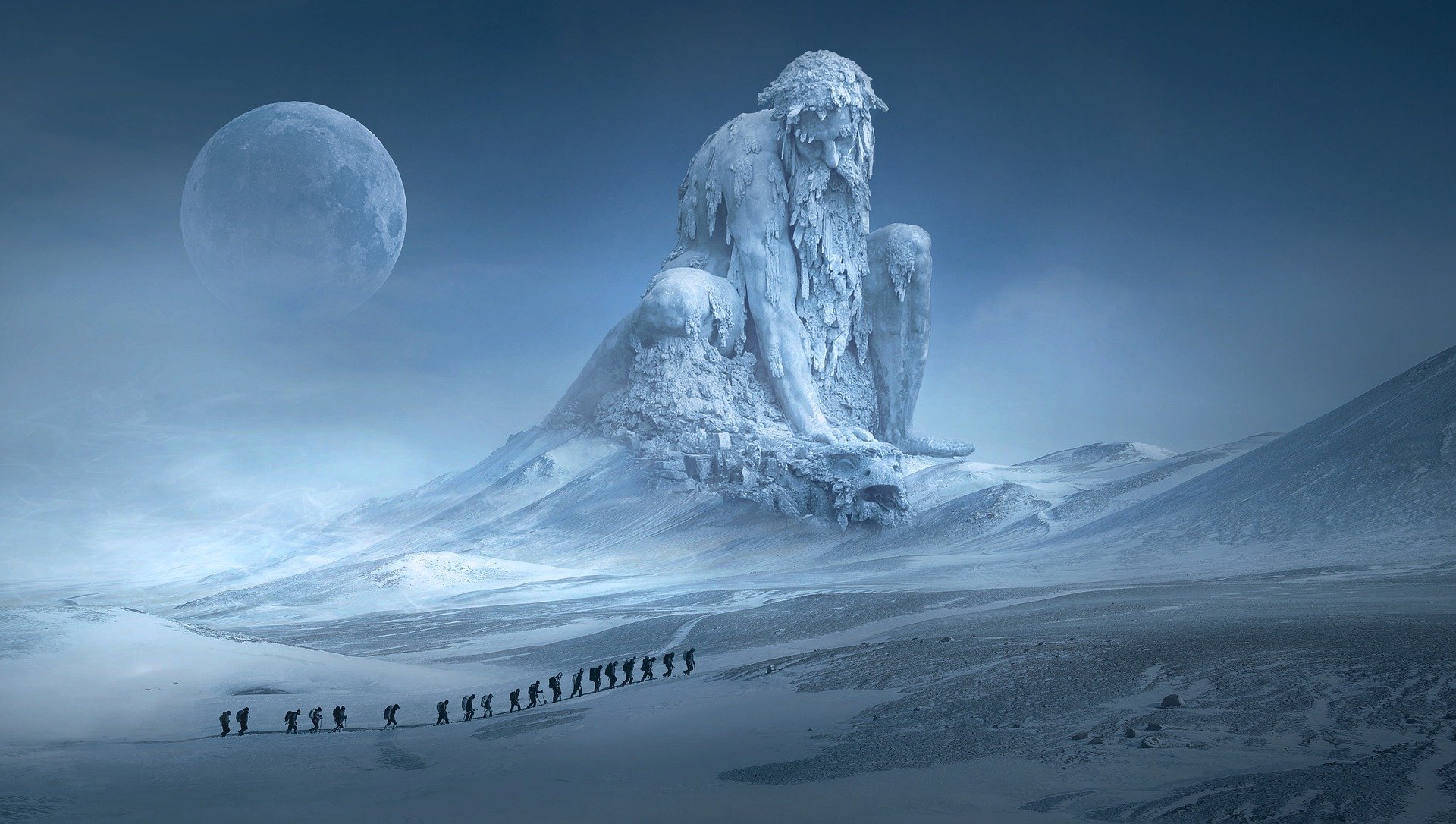 An enormous monument to Jack Frost created by an advanced ancient human culture on Antarctica some 33,000 years ago! For reasons unknown, the governments of the world keep this a secret?

Jack came into being long before any humans existed on Earth, and initially, he only had a handful of primordial Earthly Gods, and Goddesses to keep him company. Not even Earth Goddess Gaia was born yet as more life on Earth was required for her spontaneous birth! Of course, Primordials and most high-level nature deities often clash and jockey for power positions! However, Jack’s cold heart made him prefer to be alone, and not take part in the nature deity hierarchy. For a time he flirted with Ice Demons, and even demons of Hell during his darkest hours. Thankfully he was more or less apathetic, and never chose a particular side despite more darkness than light dwelling within his icy soul.  His insanely long life was rather aimless and without purpose. Something that can sometimes be seen in his angst-ridden blue glowing eyes. Read The Rest Of The Story Here… April Fool’s Day isn’t just a time of pranks and jokes confined to human instigators.  There are magical forces at work sparking supernatural shenanigans. The April Fool is the official supernatural leader of April Fool’s Day. He appears to be a jocular jester personally pranking those he feels need to be taken down a peg or two. Sometimes it’s merely an individual who may be a bit too righteous and requires some enhanced embarrassment. He has a variety of paranormal powers that allow him to accomplish his hopefully harmless habits of perpetually pranking people amid loony laughter and goofy giggling. This happy harlequin is known to become quite malicious when dealing with egregiously evil individuals or those who lash out in anger. It’s always best to laugh off his jokes and learn a lesson from them. Sometimes it’s as simple as learning to laugh at yourself and not let an over-inflated ego guide you through life.

The Origin Of April Fool’s Day

The Fantastical Fool is known to be a Trickster by proxy through the power of the Norse Trickster God Loki. The real Loki is not very much like the Marvel movie character. Sometime in the 16th century, he began planting the sub-conscious seeds in humankind for the formation of a Fools Day. A day to teach unruly humans a lesson through tricks and pranks. A time to let one’s own mischievous merriment loose upon the world while relishing in the amusement of witnessing embarrassment. The ultimate purpose was to create a Holiday Spirit that would grant Loki more power. That day become April Fool’s Day as we know it today. Naturally, he also loves messing with humans as an amusing activity for his own entertainment.

How Are April Fool’s Chosen?

As April 1st took shape Loki decided to install an Earthly emissary to directly preside over the holiday. If he did so himself it would have drawn disapproval from more powerful Gods and those who were after him for his past transgressions. So he created The April Fool! He hand-picked the original April Fool centuries ago but thereafter the Fool picks his successor every 7 years. The Foolish Fool is formerly a human who loves jokes, pranks, merry mischief, and a sense of comical justice. After his silly service, The Funny Fool returns to being a human. Although he retains some of his powers to a limited extent along with living an exceptionally healthy life well into the mid-100’s. It is said when Fool’s die they go to an especially jovial afterlife created in the Underworld by Loki. Thus far there have only been male fools but it’s only a matter of time before a funny female takes the title of April absurdity.

The Perplexing Powers Of The April Fool

The crazy clown of April has super strength, speed, agility, and otherworldly senses that fall somewhere at about half that of a Demigod. This is courtesy of Loki and The Spirit Of April Fool’s Day that is intertwined with The Spirit Of Joviality. Like all holiday leaders or even Practitioners Of Magic, the Fool can draw upon the metaphysical energy of said Spirit. He has psychic abilities that include mind reading and hypnosis. This allows him to locate various victims deserving of his drollery. However, Loki telepathically sends him his own choices as well.

The April Fool’s Abilities Are No Laughing Matter

It was once thought there was more than one Fool as once since he would appear in multiple places around the world simultaneously on April Fools. We now know that time works differently for him which indicates Chronokinetic abilities. April Fool’s Day is the equivalent of 365 days for the jolly jester. This gives him all the time in the world to teleport about the globe pranking everyone he pleases. At the end of any given year April 1st he is thrust to the next years. In essence, the April Fool is at work for 7 years non-stop. Thankfully, he requires no sleep nor any sustenance as well. The April Fool is extremely humorous, intelligent, and cunning in his prank preparations. He has a plethora of magical powers that include invisibility and warping reality to see his wacky ways come to funny fruition.

How To Repel The April Fool

You have nothing to fear from him but prepare to be prolifically pranked on April Fools Day.  He chooses both the righteous and wicked to transmit his titanic tomfoolery upon!  Depending on how they handle it they will either have good or bad luck for the entire month of April. If you are a good sport you’ll get good luck but if you get agitated you’ll have bad luck. If you’re easily embarrassed then try very hard to grin and bear it. Still, there is a possible way to not play the Fools game if you’re in the supernatural know. Mother Nature always provides some way for humans to defend themselves from paranormal perplexities. The only known repellent for the April Fool is the Harlequin Flower, aka Sparaxis tricolor. The Sparaxis grandiflora variety has also shown some promise.  Plant the flowers around your home, display inside and wear them on your clothes.  A perfume or cologne made of the Harlequin flower or an essential oil of Harlequin may also act as a deterrent. Crushing the flowers, and mixing them with holy water may be a possible weapon against the fool if you’re a big enough party pooper. Unfortunately, this isn’t a guaranteed deterrent if the Fool is determined to get you. We also know that particularly powerful practitioner’s of magic can avoid his hilarious hijinks. Some even sit in a supernaturally sealed or spell protected room for the entire 24 hours of April Fool’s Day!

The only known recording of The April Fool when he pranked us here at Mystic Investigations!