Uma Thurman, aka Goddess Hera wife of Zeus, is depressed over her existence as a mundane Goddess in the modern monotheistic world that no longer worships her. 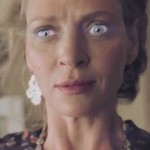 The Earthly Gods, including Greek, Roman, Celtic, Egyptian, etc, may have a lot less worshipers but they still exist. Like the video above some have been reduced in power to a biological life while others still enjoy higher dimensional status. Unlike the video Zeus, and Hera are still powerful Gods. Zeus currently has the largest faction of Earthly Gods ready to do battle in the coming war of Armageddon. The powers of these Gods, and Goddesses can be negative affected by various factors since there are a variety of Earthly Gods who formed by differing methods. The ones who primarily formed by the will of the human collective consciousness, somewhat like a Tulpa Thoughtform, are the most vulnerable when it comes from a lack of human belief, and worship. Such Gods either end up in a weakened human like form as your mundane next door neighbors, a higher dimensional dormant stasis, or simply blink out of existence.

All ancient Gods, and Goddesses receive very little worship in comparison to centuries ago thanks to the global domination of the monotheistic religions. Especially Christianity. However those like the Greek God Zeus retained power by pooling power with other Gods, encouraging practitioners of magic to rely on them, and create powerful cults to focus the reduced concentration of the human collective consciousness upon them. Of course some realized the true nature of their higher dimensional form, and believed in themselves rather than the need to be fueled by the power of human souls. Gods can have big egos that enjoy worship but many actually are powered by the energy they gain from it.