Posted on October 26, 2014 by Halloween Haunter 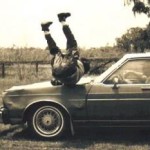 A Michigan man in zombie disguise was hospitalized after being the victim of a hit, and run October 25th, 2014 at 8:30 PM. He was at a Halloween costume party, and decided to go outside to take a few puffs of his nutritious cancer stick. The moron apparently thought it would be funny to enter a lane of traffic in an attempt to scare motorists due to his Walking Dead appearance. Either the driver didn’t see this fool, or thought it was a real zombie.  Fleeing a crime scene without contacting authorities is never a smart idea.

If it was an accident then it would be better to not escalate the incident into criminal charges. If the driver thought it was a real zombie then they had a responsibility to report the living dead threat to a local paranormal investigations agency, Zombie Exterminator, certified Zombologist, or even the US Paranormal Defense Agency. It’s doubtful an impact with a car would kill a zombie. Especially if a human victim is now in good condition after the incident. The only way is if the zombie was in deep decay. The lesson learned in this story is for pedestrians to stop playing chicken with traffic, and don’t pose as a supernatural being because someone may see you as someone who could bring harm to humans! Please paranormal party responsibly this Halloween.  Especially if Zombies are your costumes of choice! Read The Entire Local News Story

We love all things Halloween! Whether it's glee of trick o treating, the iridescent allure of the autumn season, or the spooky mystique of supernatural beings. Enter the world of Halloween all year round on our All Hallows Blog.
View all posts by Halloween Haunter →
This entry was posted in Halloween News, Zombies. Bookmark the permalink.