Lucifer The TV Series On FOX 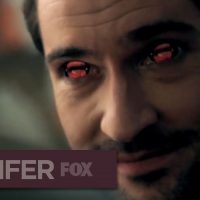 Fox Television has just picked up “Lucifer“ the series.  A television show about the Devil getting bored with Hell so he moves to Los Angeles, and opens a nightclub called the Lux. He also apparently aids the LAPD in capturing criminals.  In addition he seems to have limited powers which should include the full array of psychokinetic powers a high level Archdemon would possess.  This could be explained by him wanting to keep a low profile by having a moderate metaphysical signature so as not to draw the attention of Angels.  Although it seems at least one Angel visits him regularly.  In our Universe the Devil does have limited powers due to being ousted from Hell by the Sorcerer Dimitri Diablo, and forced into a human body.  This is both a curse, and a blessing since it makes it more difficult for Angels to locate him.  The Devil does have a Heavenly warrant for his arrest, and capture.

The Devil would also never aid the LAPD, or anyone else for that matter, in the capture of criminals unless they personally wronged him in some way.  Otherwise he would reward them for their efforts, and go after good people instead.  In the video above some gang sends a hail of gunfire at him killing his girlfriend, or whoever that is.  If that were real he would have resurrected her instantly, and yes indeed taken down the criminals for disrespecting him.  In another scene he indicates he can’t read minds yet that’s something even a vampire could do.  Our Universes dumbed down Devil has more powers than this Lucifer Morningstar as he calls himself.  The Lucifer in our reality goes by many aliases.  None as obvious as that.  In addition it’s unlikely he would open a nightclub as that would bore him rather quickly along with making him an easy to find target.  As far as we know he’s never been bored by the multidimensional fantasy world of Hell he creates with his mind!  Who would become bored of being the King of their own dimension complete with Author Authority powers there?

“Lucifer“ is by no means supernaturally realistic for the same reason no show makes any character a virtual Superman.  Simply because it would eliminate too many story lines if the character could instantly solve any problem.  We’ll watch this show however since it appears interesting as they paint the Devil in an antihero light.  Maybe he decides to turn over a new leaf, and ascend back to Angelhood begging God for forgiveness.  When watching it just imagine this is a Devil in a parallel Universe where higher dimensional beings who take human form have their powers deeply limited by the laws of metaphysics.  A Universe where the Devil might not be fully evil, or perhaps gets bored with being the Prince Of Darkness.

We love all things Halloween! Whether it's glee of trick o treating, the iridescent allure of the autumn season, or the spooky mystique of supernatural beings. Enter the world of Halloween all year round on our All Hallows Blog.
View all posts by Halloween Haunter →
This entry was posted in Demons, Halloween TV and tagged Devil, Lucifer. Bookmark the permalink.