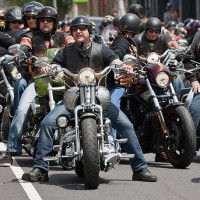 A gang of biker punks were roaring up, and down our usually quiet street Enchantment Lane. What is it with old guys who are so desperate to feel cool, and young that they have to get tattooed up, wear a leather jacket with sunglasses, and rev obnoxious motorized bicycles?  We called the police, and the Deputy Sheriff a few times but the bikers just flee in 100 different directions eluding the them. Then they come back again even louder, and more obnoxious than ever!  As the Enchantment Lane Neighborhood President, and current Neighborhood Security Captain I was getting calls from our residents complaining.  Finally my girlfriend Rebecca Abernathy, a Demi-Mermaid Witch, said,”Get out there, and kick their asses Xavier!” Despite having amazing powers she seems to say that every so often when faced with a mob. I’m beginning to think it does something for her to see me take on a large group of thugs single handedly. I then said,”Wouldn’t it be easier if you just went out there, and put the old Whammy on them?”  She replied,”Oh that’s no fun! Where’s your sense of adventure? Also there’s that pesky Supernatural Secrecy Pact to deal with. Plenty of opportunities for prying cell phone video camera eyes to catch me in my magic act!”

I was on the phone with our friend Sheriff Blake Maverick as the gray haired adult children came roaring forth once again.  Blake was out of town with his girlfriend, and our next door neighbor Tiffany Sanders.  He’d previously deputized some of us at Mystic Investigations when he needed help, and I had him authorize my Deputy Sheriff status once again.  I hanged up the phone, and took my badge out of the drawer along with putting on my trusty gun belt.  I marched into the middle of the street loudly ordering them to halt as Rebecca stood on the front porch jumping up, and down smiling with glee like a cheerleader.  She screamed,”Punch that big one in the face!” LOL!  The bikers ignored me with sneering smiles as they pretended to charge me with their ridiculously loud motorized big wheels. I stood my ground, and finally clothslined one of the bastards right off their silly little bike.  He looked to be in his early 60’s as he lie on the ground crying,”Ahhhhhhhhh my assss!”  That finally got the geriatric teenagers to park their bikes in the middle of the road.  They all ran toward me with anger over their fallen biker buddy.  At that point I utilized my extensive Kung Fu, and Ninjutsu skills to take down these sons of bitches with extreme prejudice!

It had been a while since I took on so many punks at once but it helped that they were all pretty much out of shape middle aged to senior citizen types. Furious kicks, and punches flew about wildly as one of the fools bellowed out,”My freaking hip! I just had it replaced!”  Another one was whining about his arthritis acting up while lying on the pavement. All of them were down for the count except for one exceptionally huge forty something guy who actually had some muscles.  Clearly the youth of this oh so cool bicycle gang!  He claimed to be an Ex-Navy Seal as he pointed to his tattoo with pride while holding a chain in the other hand. I then exclaimed,”Punk, I serve with an Ex-Navy Seal. His name is Hunter Jackson. Hunter is a friend of mine. Punk, you’re no Hunter Jackson nor a Navy Seal.  You’re nothing more than a has been trying to prove he’s young, and tough through his pathetic accouterments, and loud boom boom baby engine noises.”  He growled angrily and swung his chain at me but I caught it in my hand, and hit his wrist grabbing it away from him. I then threw it aside, and began rapid punches, and kicks while dancing about eluding his attempt to make contact with me.  I finally wore him out, and he collapsed to the ground huffing,and puffing.

I took out my sidearm, and put each motorized bicycle out of it’s misery.  What a pleasure it was to hear those engines die one by one leaving nothing but sweet silence. The street was left with nothing but the whimpering of downtrodden punks as neighbors came out clapping, and cheering.  One yelled,”About damn time these idiots were shut the hell up!”  Rebecca ran into the street, and kissed me. The supposed Ex-Navy Seal said,”Why man? Why?”  I then asked,”You were never really in the military were you?”  He then reluctantly replied with head down,”No”  I then said,”You ask why but we’re all wondering why you bikers do what you do?  Why do you try so hard to act tough?  Why does it only seem to be you guys who hit middle age who start this outlaw biker crap annoying everyone with your nauseating motor revving?  Just grow up already so we can all live in peace!”  One of them replied,”Jesus man I felt like an old fart, and my life was slipping away in to the grave until I got a tat, strapped on my leather, and straddled my hog for the first time.  Rebecca responded,”Oh for Pete’s sake!”  I answered,”Well how about actually taking to the open roads, and stop riding around the same area 3000 times!  Clearly you’re just showing off, trying to intimidate people, and cause trouble just to make yourself feel tough. If you’re so tough go ride on the damn Express Way!”  Rebecca chimed in,”Yeah, and enough with this tinkering of your bikes in your driveway while revving it 1000 times BS!  Your neighbors hate your guts!”

The false Navy Seal then said,”Well you shot our damn bikes man!  We’re not going anywhere

now!”  I responded,”You brought this on yourself but I’ll pay to have your bikes repaired since I doubt your insurance would cover this misadventure on your part!”  There was a glimmer of hope in their sullen eyes.  I continued,”If you truly love biking then go drive around the country, and enjoy the scenery instead of playing games with people! Can you do that?  Have you finally learned your lesson?”  The fake Seal replied,”Yeah man I guess we were being asses.  We won’t do this again if you pay for our bikes.” I replied,”Okay then I’ll let you off with a warning but you’ll have to pay to have your hogs towed away.”  The hip whiner cried,”What about our medical expenses?” I then shot back,”Don’t push it old man!”  He put his hand up in agreement.  Within 40 minutes the entire mess of baby bikes, and biker boys were gone from our lovely lane. All that was left were some oil stains. It felt good not resorting to magic, or supernatural abilities for once.  Although just as I was about to wrap this story up Rebecca told me she used a spell to amplify her mesmerizing Mermaid enchantment upon the bikers.  Damn I knew they were too agreeable at the end!

If you’re a biker then please for the love of God would you stop playing around with your bike in your driveway, and roaring around the same side streets 1000 times!  Be a man, and go out on the open highway! If your bike is so jacked up you need to tinker with it 24-7 then take it to a mechanic like a normal human because apparently you aren’t competent enough to ever fix it.  Better yet spend some damn money, and buy a brand new one!  Hopefully electric so we can end your insane noise! Thank you!!!!!!!!!!!!