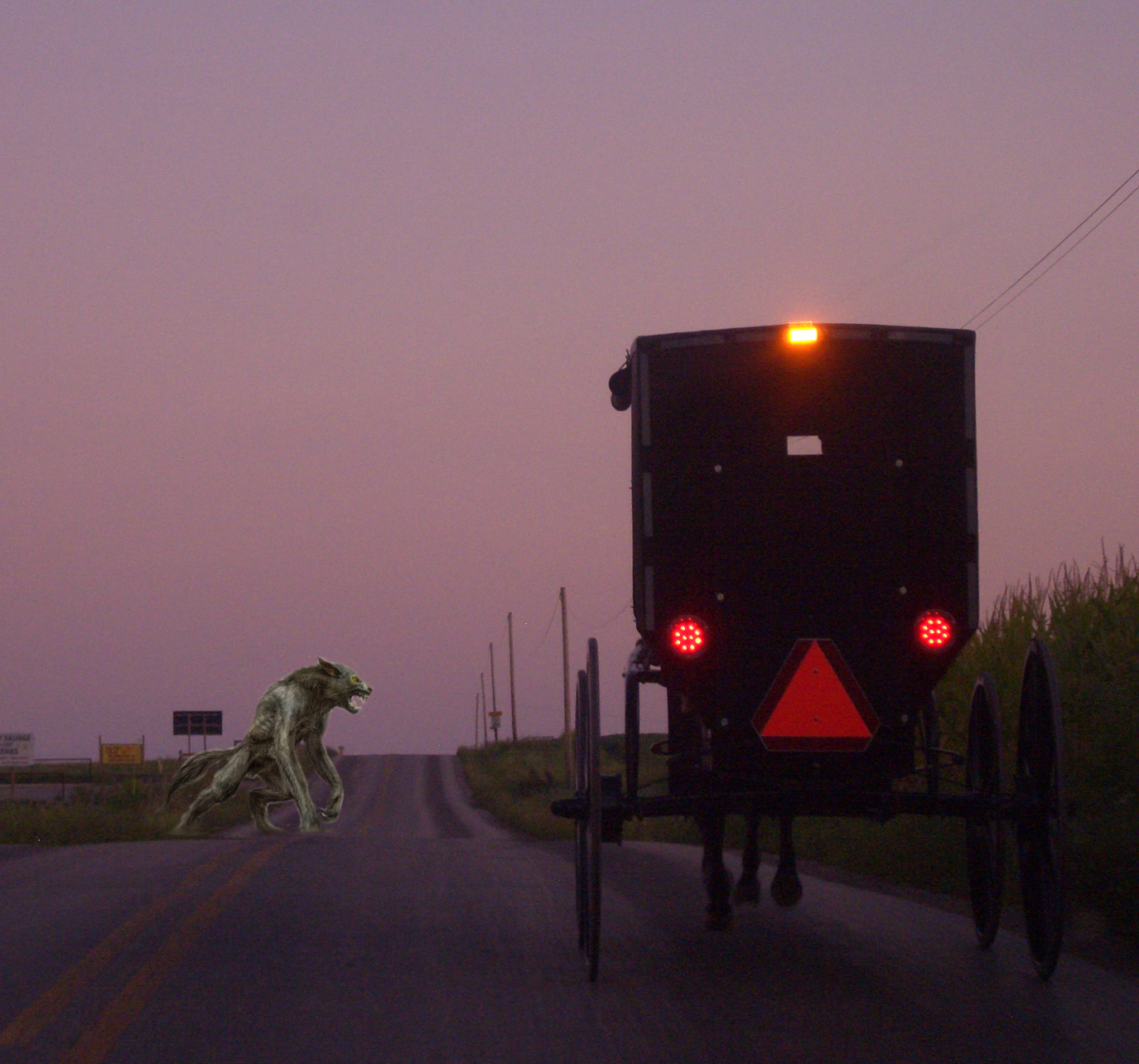 I’ve been on vacation touring haunted sites in the eastern states for the past few weeks with my girlfriend, Rebecca Abernathy. Over the weekend we were driving through Lancaster County Pennsylvania when my dark teal Lamborghini broke down. Inexplicably both our cell phones were not getting a signal!  Funny how those darn things don’t work when you really need them! As the foreboding cloak of darkness settled upon us, we walked down the deserted rural road lined with never ending farm fields of corn and wheat. The warm winds began to rustle through the tall corn stalks nearby. All while dark looming clouds intermittently covered the full moon that obstructed the last lights of the iridescent sunset. Just as drops of rain began falling we heard the click clopping of horse hooves approaching from the road behind us. It was some Amish folks in a carriage. They offered to give us shelter for the night if Rebecca would agree to cover up her heaving bosom prominently displayed in her low cut blouse. She agreed and soon enough we were given a room at Old Widow Lundy’s house.

The Widow Lundy was a kind old woman who offered us some fine organic milk and homemade Amish cookies since dinner time had already past. The rain began pelting the roof hard as thunder roared in unison with the flashes of lightening. Before we went to bed she told us she wouldn’t tolerate any funny business under her roof even if Rebecca and I were married. Yes I told the Amish Rebecca was my wife since I think ahead about these things. 🙂 We respected the old woman’s wishes and only sought to rest in our hay filled mattress bed after our long day dealing with haunted houses. Despite the storm raging outside we fell fast asleep quickly. 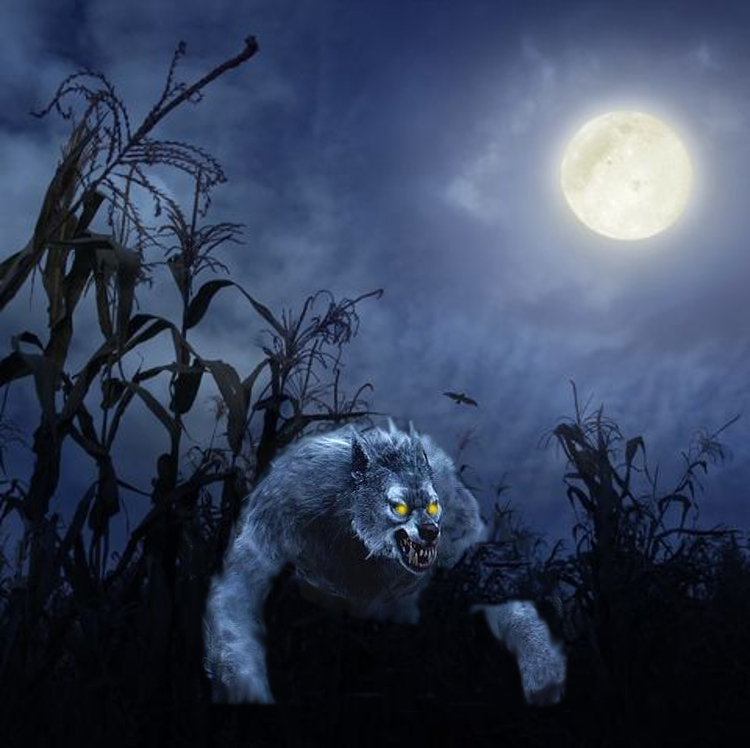 The storm had blown over and all was quiet except for the chirping of crickets and croaking of frogs. As the silvery light of the Moon glided into our window we we’re awakened by an unholy blood curdling growl. We looked out the window and it was a Werewolf illuminated in lunar light. A mob of Amish men had flaming torches and were running after the hairy beast as they screamed passages from the Bible. Since dealing with the supernatural is our specialty we hopped out the window and headed after the mob. When we caught up with them the Amish said it was one of their own named Jeb McAllister. They had been trying to heal him of the so called “Devil Dog Disease” using the power of the Holy Lord and his good book of wisdom.

We explained that Jeb was afflicted with a paranormal lycanthropy virus that causes the werewolf transformation. Unfortunately, there is no known cure. He simply needed to be locked up in an extremely strong cage or silver shackles during the nights of the full moon. Suddenly the werewolf pounced from a tree knocking two of the Amish men over. The hairy horror headed straight for Rebecca! She quickly raised her hands and yelled,“Hound of hell listen to this spell. I repel thee back to the Underworld moon unbound. In the name of Goddess Artemis I command thee!” The werewolf stopped dead in its tracks and returned to human form. Jeb quickly collapsed to the ground dazed and confused. I turned to Rebecca and said,”Wow I had no idea you could de-transform werewolves!” Rebecca replied,’Neither did I.” In reality this only worked due to the pristine nature of the land and its link to Mother Earth along with so many holy people present. Not to mention Jeb himself was a deeply religious man.

As an accomplished Witch I knew her powers were fairly extensive but this was most impressive. I expected the Amish to be rather grateful even if Jeb’s return to human form was temporary. I was taken aback when the torch toting mob turned on us and yelled,”PAGAN HERETICS! BURN THE DEVIL WITCH!” Rebecca screamed,”I’m a good witch! I don’t worship the Devil! Just the Goddesses of nature!” An Elder Amish angrily replied,”Same thing you sinful strumpet!  Anything not of the Holy Father is the Devil’s work!  Smite the heathens who seek to corrupt us!”  They bolted toward us and we then ran away into the woods as they screamed Bible passages at us. While we ran I could hear Rebecca muttering,”Damn piece of crap Lamborghini.” We came to a corn field and could see another mob with torches milling through it. I was thinking,”How did they get ahead of us so quickly?”  Maybe they have supernatural corn mazes that allow them to jump through space!  We were trapped and Rebecca turns to me and says,”Kick their asses Xavier!” I then reply,”What the hell you’re a freaking witch and half-Mermaid for Pete’s sake!” Rebecca exclaimed,”My witchcraft isn’t as effective against those Bible wielding Amish psychopaths!”

The first mob reached us and I tried to reason with them that we just wanted to leave in peace but they were determined to “Eradicate our unholy evil from the face of Gods Earth”. Who knew the Amish could be so violent! I then told them where they could shove their holier than thou attitude and I began using my extensive Kung Fu skills on them. I took them all down except the big lumbering one as the other mob came out of the corn field about to grab Rebecca. That’s when Jeb came running up. He looked ungratefully angry and would no doubt have superhuman strength even in human form as most werewolves do! At that point Rebecca yelled,”Mystic Sphere” and a huge translucent pink orb engulfed her and expanded to the point of knocking many of the Amish to the ground hard. Thanks to that distraction I was able to kick Jeb in his family jewels .  Apparently de-transforming the Werewolf drained Rebecca’s witchcraft powers and she was unable to hold the Mystic Sphere for more than a couple of seconds.

We dashed for dear life through the maze of maize and came to a clearing with a pond.  Amazingly, another mob carrying flaming sticks came out of another patch of corn field. Rebecca used her Mermaid based Hydrokinetic Powers to launch a micro Tsunami of pond water on to them.  They fell to the ground and their torches were extinguished as we bolted in to the next expanse of corn fields.  Do these people really need this much corn?  We made it to the road as the field behind us was illuminated in sinister amber light advancing on us rapidly. Luckily a guy in a semi truck pulled up and we drove away witnessing the flickering flames of the mad mob in the side view mirrors. 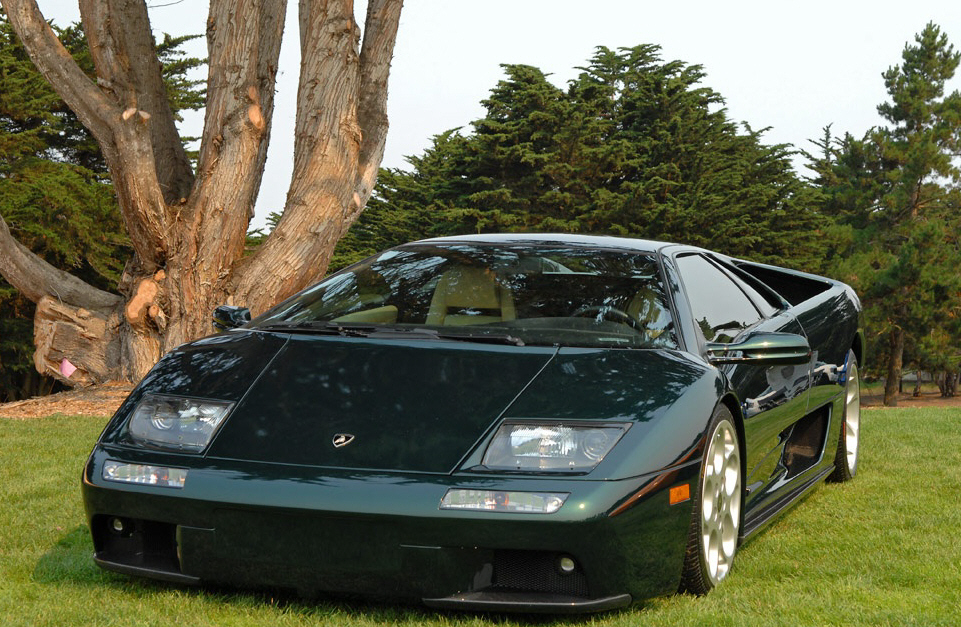 I swear I’ll never enter Amish country ever again so as long as I live or at least that particular area. They were seriously ungrateful and violent which has not been my experience with the Amish. I’ve had a few dealings with them in the past and they’ve always been gracious people.  Of course I was never with anyone who displayed supernatural powers in their presence.  In addition my Lamborghini mysteriously disappeared and the tow truck was unable to find it anywhere.  I suspect it now rolls upon the roadways of Lancaster County pulled by two horses with a pair of Amish riding the roof.

Note: This is technically our first story detailing the adventures of Mystic Investigations.