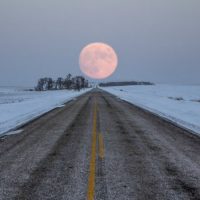 The Full Moon of January is almost exclusively the Wolf Moon. A time when mostly loner Werewolves come together in aggressive packs. Perplexing packs whose sole instinct is to snuff out human life and devour it whole with monstrous glee! Of course in the morning the Werewolves return to human form and feel great remorse for their actions. That is if they happen to remember or put the murderous clues together. All this despite January being so close to Christmas and it’s calming spirit of goodness. A serene Spirit that gives us gentle cuddly Yule Moon Werewolves. However with the New Year we have a mystical temporal reset along with certain supportive sinister Werewolf Moon Gods who take command of the lunar energies in January. Thankfully the Spirit Of Christmas still has enough sway to deflect the full brunt of the evil energies.

On top of this when we have a Supermoon like this one the Werewolf packs would be especially vicious and brazen. Luckily this January Moon falls on the first and is enchanted by the Baby New Year, Father Time, and an extended connection to Santa Claus himself. The Spirit Of Christmas is still strong on this day! Top flight Mystics, Seers, and Psychics have all agreed that this Wolf Moon is officially canceled! Unfortunately the Wolf Moon will still fly forth with a vengeance on January 31st when we will see another Full Moon in the same month. On top of that it will have the usual blasphemous Blue Moon twist of a terrifying sort! There may be some minor relief from its proximity to Valentines Day but don’t let your guard down on that nasty night!

All that being said we won’t have sweet gentle Werewolves or zero monstrous transmutations of humans afflicted with the Lycanthrope curse. There will be no packs except for those formed by mostly responsible werewolves who have control of their transformations and often maintain some level of humanity in wolf form. The uncontrolled transformations will mainly be in younger Werewolves and they will still be their usual carnivorous selves. However the usual hulked up werewolf of the Supermoon will pretty much be neutralized by the favorable New Year and Christmas factors. The humans who have been cursed the longest will find they can resist the transformation to wolf form. If you venture out at night always have religious artifacts on hand as Werewolves possess demonic DNA.  Christmas artifacts will also repel Werewolves. Even an ugly Christmas sweater might be enough to deter a Werewolf under this particular Moon.

If you happen to live in areas stricken by extreme cold snaps you might find Werewolves hiding out from Abominable Snowmen aka Yeti. Especially in places where snow is falling as well. Werewolves can smell them from miles away. Also the horrifying roar of the Yeti is one of the few sounds that cause a Werewolf to scurry away in complete fright into the dead cold night! Of course Abominable Snowmen love eating humans as well. Yet there are far fewer of them than Werewolves.  Remember that the Werewolf threat can exist even at 80% of full. Stay Safe! Happy New Year!