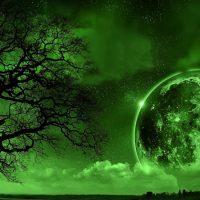 he Full Moon of March is most often referred to as the Storm Moon in the supernatural community. However like any Moon, it’s mystical magic can be dominated by various metaphysical forces. Since this Full Moon is four days away from lucky Saint Patrick’s Day, and Leprechauns are out in full force, they have some sway on the Lunar powers. So this month the Moon is called the Shamrock Storm Moon. Most Storm Moons produce more aggressive Werewolves brazen enough to enter more populated areas to satiate their need for fresh meat! Thankfully The Spirit Of Luck, and The Angel Saint Patrick, have lessened this rage. You should also manage to escape a Werewolf through pure luck! Particularly if you carry luck charms with you. Whether that be shamrock, a four leafed clover, rabbit’s foot, horse shoe, gold coin, or anything you personally considered a symbol of luck.

In some areas where Leprechauns are scurrying about you may find the Moon appears to have an emerald tint to it. When you see that rest assured you can venture out at night, and face an entire Werewolf pack without worry of even getting a scratch! We always err on the side of paranormal caution so this claim isn’t made lightly! If it appears dark green then you have witches, or other practitioners of magic, in vicinity channeling the metaphysical energies of righteous luck. As long as you bask in the green glow of this marvelous Moon nothing bad can happen to you! When a green hued Shamrock Moon falls on Saint Patrick’s Day itself you are imbued with good luck for 7 days afterward!