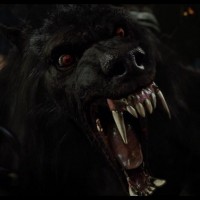 The Werewolves of the March Storm Moon are known to display somewhat greater aggression than your typical Werewolf. Which is not good considering how the standard Werewolf makes a hungry Lion look like a helpless kitten.  The Lunar energies of this Moon are greatly influenced by the transitional energies of the changing seasons via the mystical symbiosis with Mother Earth. The Month of March is a struggle between winter, and spring since both snow, and thunderstorms can occur.  This is what fuels the added rage in the Lycanthropes who are without control over their terrifying transformations, and personalities while in wolf mode.  The greatest dangers will be seen when the Moon is 100% of full in areas where storms are occurring.

One of the more interesting features of this time are an increased occurrence of Werewolves running into Abominable Snowmen, aka Yeti’s, in snow ridden areas.  Generally the two beasts avoid each other all winter long since there’s plenty of territory to go around.  However as spring approaches there’s more concentrated groups making their way north to escape the impending warm season.  Regions like New England hit with record amounts of snow will see these two horrors of Hell clashing with each other!  The victors of these bloody battles can sway either way.  Both are supernatural behemoths while Yeti’s have the home snow field advantage, and Werewolves have demonic DNA on their side.

about to somewhat negate the ill effects of the Storm Moon.  On the

other hand next week brings us our second Friday The 13th in a row so the dark luck is strong, and the Clurichauns, evil cousins of the Leprechauns, are out in full force!  Unfortunately the dark luck wins out here as far as the full Storm Moon, and Werewolves are concerned.  Not only should you partake of Werewolf countermeasures but also carry lucky charms as well.  Those whose birthday is in March can gain added protections by wearing, or carrying the March Birthstone Aquamarine on their person.  Wearing ones own birthstone in the month of their birthday is considered a lucky charm.