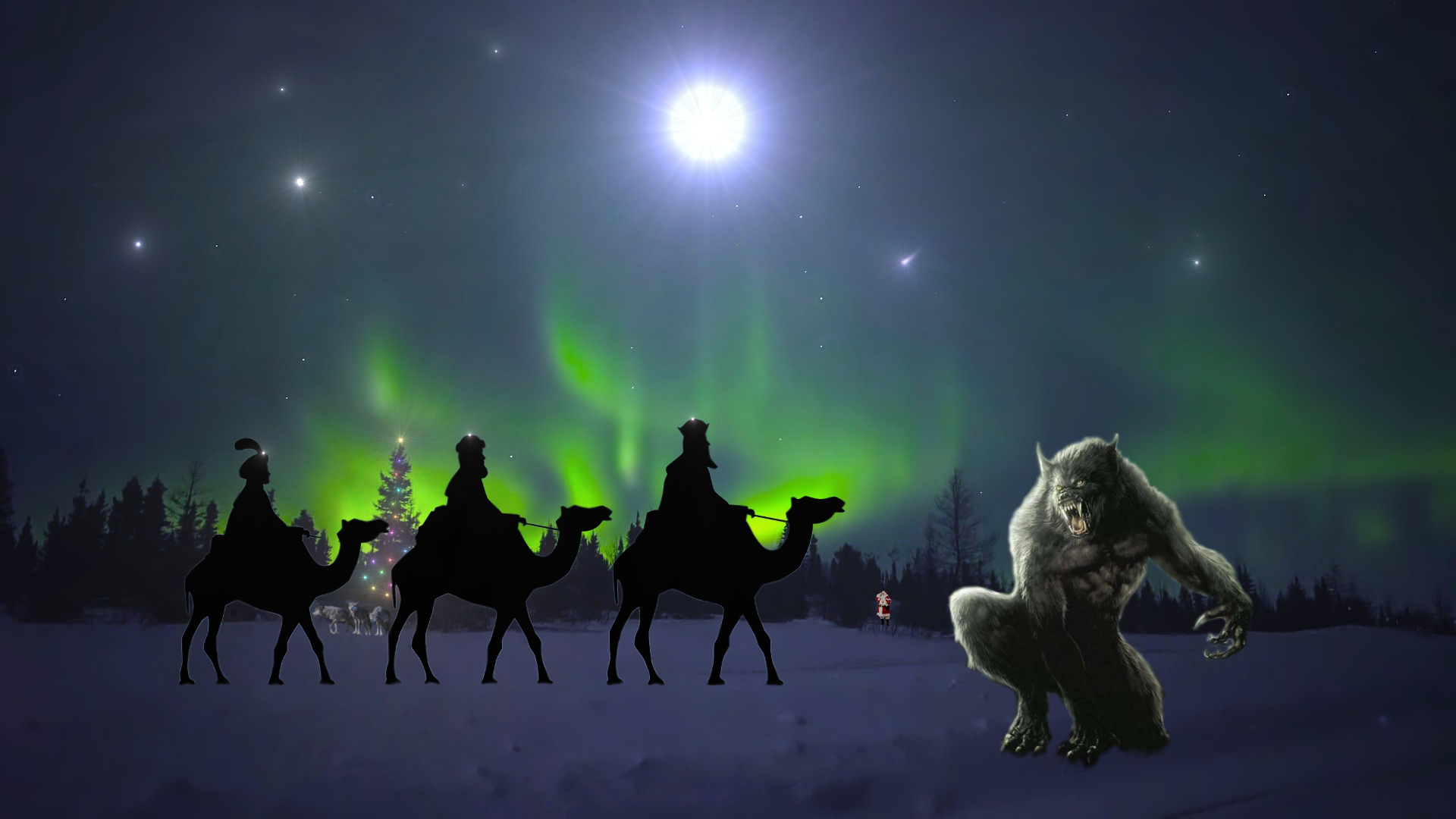 The Full Moon of January has always brought us The Wolf Moon. A lunar cycle heavily influenced by a cooperative union of deities and spirits representing indigenous cultures from around the world. Particularly those native spirits associated with wolves which are strong in ancient folklore. Unfortunately, the wolf spirit mingles with that of the Werewolf to create an inadvertent volatile situation. The Wolf Moon compels Werewolves to become the Alpha of any wolf packs in the vicinity. These packs are then enlisted in the hunt for human flesh for dinner! Normally werewolves are mindless monsters who will eat anything that moves. That includes wolves and even fellow werewolves!🐺

Thankfully the January 2023 Wolf Moon falls on the holiday known as Epiphany. Otherwise known as Three Kings Day. This is the celebration of the Three Wise Men or Magi who followed the mystical Star Of Bethlehem to the Baby Demigod Jesus Christ over 2000 years ago. They gave the newborn son of the Omniverse God the first Christmas gifts on what was technically the First Christmas. These Three Magi are actually still alive acting as immortal Kings representing the Archangels Of Heaven. Each with silent dominion over one-third of the planet. On January 6th they once again follow the Christmas Star to its current position over Santa Claus’s North Pole City to celebrate the First Christmas. They ride their mystical camels slightly out of phase with our reality. You may spot them on their journey as shadow people. If you see them, it is considered extreme luck that will stick with you for seven years or more! Once at the North Pole, they will hold court with Saint Nicholas and commune with The Spirit Of Christmas which is still strong within the Christmas Season that ends on February 2nd Candlemas.🎄

All these factors will give us far gentler Werewolves who will actually commune with wolves in common kinship. Regrettably, the Werewolf threat won’t be neutralized. Instead, the werewolves will be guided by the wolf pack who act the same as any carnivorous predator that comes in contact with prey. They will attack any animal or human as their meal of choice. If you live in an area without any wolves then you won’t have much of an issue. The werewolves in these non-wolf zones won’t actively hunt down prey unless it directly crosses their path. They may try to seek out dogs as substitutes for wolves. Thankfully, they will follow the dog’s instincts which should mean no attacks for the most part. If you see your pet hanging with a werewolf stay away and observe from a distance. If your dog wants to come indoors the werewolf with follow. Be sure to place silver, wolfsbane, holy water, and religious artifacts around the doorway to prevent entry! If you have Christmas decor in your yard and on your house then The Christmas Spirit should repel the blasphemous beast from your yard, to begin with! During this time anything Christmas-related will repel a Werewolf if you find yourself in danger! You may also pray to The Magi or Saint Nicholas for help if your life is in immediate peril!🎅