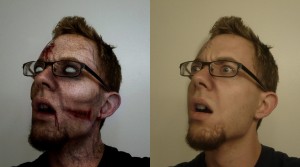 There is no report in any paranormal record of a creature known as a Werezombie. At least in the proper context. A Werezombie isn’t a Werewolf-Zombie Hybrid, aka a Zombiewolf but rather a human who transforms into a zombie either by some environmental stimulus or at will. Unfortunately, by accident, we damned someone in to being a Werezombie! A member of the living who can become the Walking Dead at any moment!

We were having some remodeling done at Mystic Investigations headquarters, and one of the construction workers seemed to feel the need to bully the teen member of our team.  Zack Powers our bionic boy wonder, and Chief Technology Officer.  Clearly, he was jealous that someone so young had such a sweet office job along with adults working under him.  He was also a bit drunk as indicated by his behavior, and the odor upon his breath.  Zack laughed it off at first but the man kept ragging on him since the construction was in his work area. We wish Zack would have said something before things escalated.  So apparently at some point, Zack attempted to use the restroom, and the man physically blocked him along with a fair amount of taunting.  Zack pushed him back a bit not using too much of his cyborg strength but then the drunk grabbed his arm forcefully in a fit of anger as he slapped him in the face.  Zack, in turn, got angry and forgot himself. He struck the man in the chest at full force sending him straight through the restroom door and then through the handicapped toilet stall door crashing into the tile walls causing them to crumble before landing beside the toilet.  The man was dead on impact!

Zack stood over his body in a panic checking for signs of life.  He then hit the Mystic Investigations panic alarm that sounded throughout the building along with red flashing lights going off everywhere.  The alarm means all non-essential personnel must leave the building.  Our smartphones gave the Executive Staff the exact location of the alarm being set off.  We all found Zack there in tears as he told us what happened.  We gathered around the deceased man lying next to the toilet while Zack had a panic attack, and ranted about how he would have to spend the rest of his life in jail.  We attempted to calm him down as we discussed what to do. Our Cryptologist Dr. Ashley Abercrombie confirmed he was dead, and calling an ambulance wouldn’t help. He was ready for a Coroner, and the Mortician, with a burst heart, broken ribs, cracked spine, and massive head trauma!

Rebecca Abernathy our Demi-Mermaid White Witch asked us, “Is it worth one of us 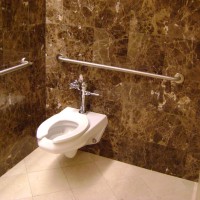 possibly dying, or some of us facing massive life-altering repercussions by using magic to resurrect him?”  As selfish as it might sound we decided it wasn’t.  Especially considering what Zack told us about this guy!  Drake Alexander our resident vampire made it clear that becoming a vampire must be a choice on the persons part, and he would never want to bring such a person across into the eternal dark shadows.  Making someone a vampire is an eternal responsibility for a parent vampire.  Seth Morgan, a Werewolf, inquired if he could do anything.  However he couldn’t be of help in his human form, and it was doubtful if a Werewolf bite could resurrect a totally broken dead corpse.

Zack himself has super healing nanobots coursing through his bloodstream that rapidly heal any injuries to his biological, and mechanical parts.  Unfortunately, a plethora of tests over the last several years showed that they only work on Zack, and become dormant in any other subject including inanimate objects.  Ashley then ran back to her lab and returned with what she called an experimental Immortality Elixir she had been working on.  It was based on her unique Demi-Zombie blood as she is the worlds only known living stable human-zombie hybrid.

Since we had nothing to lose she injected the man with the elixir.  We held our breath for a minute, and then assumed it wasn’t going to work.  We walked away as Zack cried profusely with Rebecca comforting him. Despite the man being a drunken bully Zack would never want to take anyone’s life.  All the sudden a blood-curdling scream came from the toilet stall. We ran back, and the man was sitting upright breathing heavily.  Zack immediately let forth a joyous scream, and sigh of relief.  He helped the man up while apologizing to him repeatedly. The guy was a bit dizzy but in good spirits.  Certainly no longer drunk he apologized for his behavior.  He said he had been going through some rough times in his life and was boozing it up lately.  He remarked how Zack sure knew how to throw one hell of a punch. He couldn’t believe he survived but all was forgiven as Ashley gave him a clean bill of health with all injuries healed. However, she did indicate his heartbeat was unusually slow.  She wanted him to stay for observation overnight but he said he really had to get home.

Drake made a funny look as he sniffed the air while the man walked past.  He then shook my hand as he was about to ascend the staircase to the lobby.  All the sudden his eyes had this blank stare as the iris, and pupils faded to an unholy gray color.  The guys face turned sickly pale, and his hands ice cold.  Within seconds he looked like a Zombie, and lurched forward growling taking a huge bite out of my shoulder! I screamed in pain as a chunk of my bloody flesh dangled from his mouth. Drake immediately grabbed him and tossed him through a wall into an office.  He yelled, “I knew I smelled Zombie!”  The enraged zombie pounced off the ground attempting to attack Drake but he tackled him to the ground punching the zombie repeatedly in the face.  Of course, it’s impossible to knock out a zombie so Drake finally stopped and merely restrained him.  Rebecca and Ashley treated my substantial wound while I feared I would become a member of the living dead!

The zombie was locked way in a sub-basement cage we use to contain Werewolves on Full Moon nights while Ashley examined me in her lab.  I’ve never been sick a day in my life, and have always healed rapidly from wounds. Although Ashley could never find the reason why. However, she did note I had the most perfect DNA sequences she has ever seen in her entire career.  She said there was miraculously no zombie virus in my system despite testing the caged zombie to find he was the real contagious deal!  Rebecca used a little magic along with Ashley using some supernatural treatments to make the wound completely heal within a day.  Ashley apologized for all of this but I told her it wasn’t her fault.  We all knew this was an experiment, and the point was to resurrect him for Zack’s sake. 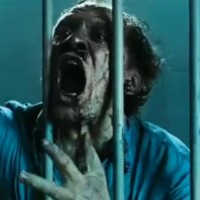 Once the zombie was placed in the cage and left alone the surveillance cameras showed him transform back to a man.  We all ran downstairs to find him completely coherent with no memory of what had happened. Seth then blurted out, “Hey he’s like some kind of a Werezombie or something!”  Ashley then replied, “Yes Seth I think we just accidentally created the worlds first Werezombie!”  The man was angrily puzzled why he was locked away, and why we were talking about such crazy things.  We then showed him security video footage of his transformation, and he was beyond shocked while we informed him about the world of the supernatural being real.  He was beyond agitated and scared that we had turned him into a freak of nature and demanded we let him out of the cage but we couldn’t for the safety of society.  He refused to make a phone call telling his employer, and friends that he decided to go on an impromptu vacation.  Drake used his vampire hypnosis to compel him to do so.  We couldn’t have people report him missing, and then have it trace back to us.

We then began testing him to find out what makes a Werezombie tick.  The primary stimulus that transforms him is the scent of full humans, and touching them as well.  Ashley designed nostril filters to block his olfactory receptors from picking up human scents. He also needs to wear full clothing, and gloves if he’s to have physical contact with people. In the meantime, Ashley is working on a special skin lotion he might wear in order to not look so odd being totally covered up when Summer comes around. Tasting humans is also a factor as witnessed when our telekinetic psychic Julia Hathaway kissed him on the lips for the sake of science.  He immediately transformed but once de-transformed again he wasn’t so mad anymore now that he had a crush on Julia.  Rebecca duplicated the experiment, and he transformed again. This despite the fact she is only half human so that means intimate contact with even supernatural beings of some human lineage could cause him to Zombie out.

Everyone worked with him for the greater part of a week to accept his fate, and perhaps live for the hope that he could control his transformations. Perhaps even maintain his human persona in zombie form so he could be a living dead superhero.  This is why we brought in some good folks from our local Native American Comanche tribe.  They are werewolves who can control their transformations and are completely coherent in wolf form. They’ve been working with Seth since he became a Werewolf, and he’s seen some excellent progress.  Now the man who shall remain nameless, to protect his identity, is excited about the prospect of being a superhero with enhanced strength, speed, agility, and senses.  Each time he transforms into a fresh zombie with minimal rotting so he’s not staggering around like a rigid geriatric.  Ashley also thinks he could be immortal since each transformation repairs his human form completely.  In fact, he remarked how young he looked after his first transformation.  Zombies would be immortal creatures if they didn’t decay like a corpse.

Julia also discovered that his soul disconnects from his body when he transforms into a mindless zombie. Then amazingly reconnects again.  After hypnotizing him he found he had memories of being in the astral dream plane while in zombie form.  He reported that no corridor of light presented itself to him.  Instead, he was tugged back into his body abruptly.  This fits with the fact that Zombies have no soul, and are merely automated bodies out for human flesh to fuel the zombie virus.  Speaking of which it seems the virus is latent while he’s in human form so there’s no danger of turning someone into a zombie as long as he doesn’t transform.  Of course, that can happen within seconds!

We plan to release him tomorrow in the care of the Comanche Werewolf tribe as they work further to rehabilitate him so he can co-exist among humans. His Boss agreed to let him have 6 months off with the promise of his construction job waiting for him thanks to my intervention…and agreeing to pay double for the remodeling project!  We also are paying for his living expenses over the next year since it’s the least we can do. At present we’re allowing him to walk around our headquarters with an implanted tracking microchip.  He agreed it’s the right thing to do for the safety of everyone if he should ever transform, and escape. So far being fully clothed, and wearing the nostril filters is working.  Although he seems saddened he can’t kiss Julia again….for now! 😉