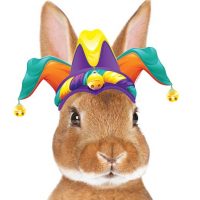 On April 1st, 2018 we were cautious while enjoying Easter Sunday festivities as it was also April Fool’s Day. Especially after we had issued an April Fools Easter Alert the day before! On April 1st we generally garner the honor of a visit from The April Fool himself. He’s a prolific paranormal prankster who enjoys embarrassing people whether they simply be supernaturally relevant or pompous asses. In our case hopefully, it’s Mystic Investigations legendary status in the supernatural community. Usually, the Fool mildly vandalizes our website with his goofy content along with personally pranking us. I remember that time he literally turned me into a helium balloon and I floated out the window! It was a shocking and surreal experience! On the lower end of the joke scale, he enjoys teleporting people into crowded area’s completely naked! Our resident demi-mermaid witch Rebecca Abernathy once stepped out of the shower and she was suddenly on Main Street devoid of even a towel!

Since Easter and April Fool’s converged this year both the Easter Bunny and the farcical Fool decided to mystically meld their holidays into one. The Easter Bunny would distribute eggs that weren’t quite what they seemed beside the normal with candy and small gifts. This meant rotten eggs weren’t just for those on the beautiful bunnies naughty list! Hopefully, there would still be eggs containing powers, wishes, and magical objects as well. In unison, the April Fool would work to employ an Easter theme into many of his alarming exploits. Thankfully that meant more bearable pranks for us!

In the morning we attended Easter services at our associate Father Tom’s Church Of Holy Light. He is our exorcist and source of top-flight holy water. Naturally, as usual, we fell asleep in the pews but bolted awake as the Easter Egg Hunt began outside. It was a mild sunny early spring day as we cheered the kids on. Suddenly the Werehare Easter Bunny showed up in his 6 foot tall humanoid furry white rabbit form to give us gifts as a reward for a fine fight against the frightening forces of darkness. Other than us nobody knew his true identity and merely assumed it was a guy dressed up in an ultra-realistic rabbit suit. One way to tell he’s the real deal is the fact that there’s always a group of baby chicks and bunnies following him around. You can also clearly see the sparkling reality in his large eyes that can range from blue to green in color.

The Bunny was far more jovial than usual as he kept giggling like a school girl. He gave everyone at Mystic Investigations an Easter gift basket. My basket exploded leaving confetti and silly string all over me. However, there was some sweet chocolaty goodness at the bottom of the basket. Luckily I wasn’t the person got chocolate cream and pink glitter spattered all over them! The Easter Bunny chuckled and said,”Sorry guys but it’s April Fools Day!” I asked where the April Fool was but he had no idea.

Later the enchanted Bunny invited us back to Easterville, his cloaked village in the Black Forest of Germany. We eagerly agreed since we assumed we might avoid the April Fool. The only way to get to his village instantly was to follow him through his global network of rabbit holes that are in actuality wormholes courtesy of Mother Earth Goddess Gaia. The Easter Bunny transformed to his normal small rabbit form and hopped in. His chicks and bunny helpers jumped in after him. Rebecca conjured up a spell to miniaturize her Mystic Sphere while inside so it would fit into the Easter Bunny’s rabbit holes. So some of us instantly took a trip to his village in the Black Forest of Germany. Nothing new for us here! Rebecca made a point of saying we could only be miniaturized a couple of times a year before it caused bodily damage. So we couldn’t just visit the bunny on a whim!

The village was a fun-filled community of medieval buildings splashed into a kaleidoscope of colors. At the center was a giant egg-shaped castle that was the Easter Bunny’s home and the Capitol Of Easter. The streets were glittering surfaces of varying bright colors that almost resembled linoleum flooring. Even the skies were mystical with pink fluffy clouds courtesy of a magical illusion. Bunnies of all colors, yellow chicks, and kids ran about cheering with glee as their parents looked on. Obviously, these were all people in the paranormal know like us. We enjoyed all manner of amusement rides located about the village including the egg roller coaster. An egg-shaped car rolled on tracks that winded in and around the entire village including underground. Eventually, we retired to Egg Castle for Easter dinner. Amazingly the Demi-Angel Santa Claus, his wife Holly, and their kids made an appearance to pay homage to their good friend Eggbert, the Bunnies real name. As darkness covered the happy village a spectacular fireworks show lit the sky with ecstatic Easter imagery. We then bid the Easter Bunny farewell before popping back through the bunny hole to our home in Woodland Springs, Colorado. 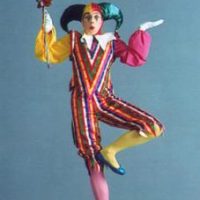 Some of us went to the office to deal with recent pressing paranormal perplexities while others headed home. What we all found was everywhere loaded with crazy bunnies hopping about while rotten eggs rained from the ceiling! The April Fool teleported to each location in his jester costume laughing like a loon while bellowing,”Happy April Fool’s Day! Believe it or not, this wasn’t as bad as what he did to us other years! Thankfully he didn’t touch our website. As usual, everything disappeared and went back to normal at the stroke of Midnight! Well except for when our resident vampire Drake Alexander was teleported buck naked into Times Square New York one second before the Witching Hour! Being transported places doesn’t reverse on April 2nd for some reason? He sped into a subway tunnel at super speed and hypnotized some guy to give him his clothing. Then Drake arrived back home the next day after he caught the first available flight. At least now we have another year before being pranked again! | Twitter |