Posted on November 29, 2019 by Xavier Remington 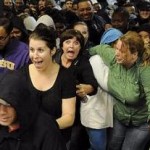 There are other dangers on Black Friday besides the shocking shopping frenzy that can incite fights and possibly get you trampled by a crazy mob hell bent on saving big money for cheap crap. Ironically many of these so called doorbuster deals are full of bull!  A large concentration of humans in a state of chaos is the perfect place for practitioners of magic to perform various mystical experiments which might include direct experimentation on the crowd or kidnapping a select few.  Those into the dark demon worshiping magic might sacrifice humans to their patron demon or dark God of choice to perform their sacrilegious rituals amid the almost zombified crowds of insane shoppers. Indeed those enthralled with greed for material items become vulnerable to the metaphysical world!

Vampires And Zombies!
Interestingly enough real zombies have also been known to wander into crowds and feed amid the crazed chaotic atmosphere totally unnoticed by anyone until it’s too late.  Vampires also flock to stores in the dark early morning hours to enter into a deadly feeding frenzy all their own. Run of the mill serial killers, and those of a supernatural sort, can get in on the alarming action as well.  In addition those with weak minds who enter into a serious state of single minded material item acquisition, coupled with wanting to hurt anyone who stands in their way, opens themselves up to demon possession.

The Monstrous Mammon Loves Your Greed!
One of the few demons who resides in the flesh on Earth, due to posing as a god, is the demon god of greed Mammon who relishes crazed crowds teeming with lustful greed for all things material.  In order to maintain his god facade, his power, and avoid Angel detection he must consume horrifically greedy people on a regular basis. Amid Black Friday shoppers he has a field day harvesting humanity for his diabolical dinners.  Religious artifacts, such as holy water, or crosses, will do little if you are infested with the mental illness of pure greed. Especially if you hold ill will in your heart for anyone who stands between you and your selfish shopping spree.  Mammon may just take a bite out of you right in the middle of the crowd, or even hypnotize you into coming with him.  Although with some of the massive mobs he could probably drag you away kicking and screaming within the crowded chaos without anyone noticing your titanic terror!

We’re not telling you to avoid Black Friday Shopping and stay at home. We’re just saying you need to keep a cool head, and calm heart as you dive into purchasing madness.  Don’t let the spirit of greed take your mind and heart over. Otherwise you are at great risk for various supernatural reprisals, and of course human justice if you get too out of control! Unfortunately this won’t help with the zombies, vampires, and practitioners of magic looking to use people for their own nefarious purposes but there’s always a risk when you enter a sea of humanity at any venue on any given day.  Stay safe, and shop serenely this holiday season!

I'm the President of Mystic Investigations. A private paranormal crime fighting organization out for supernatural justice in a world full of supernatural darkness.
View all posts by Xavier Remington →
This entry was posted in Black Friday, Demons, Magic, Zombies. Bookmark the permalink.