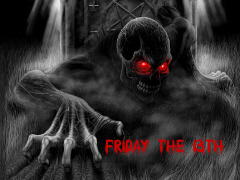 A Friday The 13th Watch is in effect as each time zone on Earth moves into it’s murky dark luck waters.  A specter of misfortune born from paraskevidekatriaphobia, the fear of Friday The 13th along with Triskaidekaphobia, fear of the number 13 itself.  These fears foment into a sub-conscious spirit within the human collective consciousness spawning bad luck throughout the world in a variety of forms.  Various demons, poltergeists, and other malevolent entities feed off said fear thereby causing more unfortunate incidents on the Friday The 13th.  Vengeful spirits can also be resurrected by the dark energy swirling about. The most famous of those being Jason Voorhees who took a rare physical form.  Fortunately he hasn’t been seen in a very long time. In addition since we’re somewhat near Saint Patrick’s day expect to see dark Leprechauns, aka Clurichauns, looking to take advantage of people to spread evil forth!  Never ever make a deal with a Clurichaun, or demon!  It’s not worth it! Any negative issues you may be dealing with on the 13th will thankfully fade away as Saturday The 14th Valentines Day comes into play.

When it comes to Friday The 13th there is one specific entity of evil who rears it’s ugly head while rarely being seen any other day of the year.  He is the infamous Friday The 13 Demon Specter.  We now believe he is a demon who taps into the Friday The 13th fears that create an unconscious spirit in the human collective consciousness.  Somewhat akin to Santa Claus claiming the Spirit Of Christmas or Shala embodying the Spirit Of Halloween.  Except of course the Specter does it for the purposes of playing maniacal games with humans.  It’s believed this demon was an outcast from Hell who didn’t want to play ball with the Devil yet loathed humanity, and everyone else for that matter.  There’s a possibility he was once human himself. If so then he likely died on Friday The 13th. He lies dormant on all other days of the year except for Friday The 13th’s.  Although his mind may search the planet for the perfect victims throughout the year.

His ritual is oddly specific, and may indicate he’s bound by a more powerful force.  For whatever reason he does not directly physically harm people.  Although the dark luck he exudes can lead to accidental injuries, running across other evil entities with deadly intent, health issues, etc.  At precisely the Midnight Witching Hour on Friday The 13th in exactly 13 time zones on Earth thirteen unlucky victims get the displeasure of meeting this sinister specter.  He tends to emotionally feed off people with the greatest fears of Friday The 13th, and the number 13 in general.  However he feeds off other fears as well, and will often target those with weaker minds.  Thankfully the magic of innocence children enjoy repels this despicable demon. So parents can rest easy as their children sleep snug in their beds.

The specter generally rises from the floor of the victims bedroom in a black fog of bad luck. He takes shape as a black billowy smoke with a skull shaped head complete with eerily lit crimson eyes.  He slithers along the floor making something that sounds like a low hissing sound. The diabolical demon ascends up onto the sleeping persons bed with his hellish face aligned with theirs as his sinister smoke encapsulates them.  He then proceeds to literally feed off the dark energy of ones fears, and anxieties.  Generally the person is in REM dream sleep or the demon sends them into it.  Once there he torments his victims in a series of horrendous nightmares unlike anything ever experienced by a normal human.  As 1 AM approaches he descends back into the floor dissipating to non-corporeal form in order to teleport to his next unlucky pawn. From that night forth they will have bad luck for 13 years!  If they manage to survive that they will still have a lifetime of perpetual night terrors!

What can be done to prevent this from happening to you?  If you have no fears of Friday

13th, or the number 13 then you shouldn’t have much to worry about but it’s not unheard of for a mental manipulation to take place in which these fears manifest.  Various anti-demon countermeasures have had limited success due to this abomination tapping into the human collective consciousness thereby dulling religious repellant powers.  Although he avoids those smart enough to have holy water, Bible’s, crucifixes, or any religious artifacts one believes in for protection purposes.  The only known way to defeat him is to destroy him during the nightmare phase of his psychic attack on you.  Since it’s your mind he’s messing with you have the home field advantage.  Just remember that he can’t physically harm you!  If you manage to repel him from your mind then he will disappear, and you will be free of any dark luck, or night terrors.  There is also a chance of lessening the mental, and fortune draining aspects of his nocturnal visit by leaving your body via Astral Projection.

Evidence also indicates that his 13th victim is specially chosen as being a borderline personality between good, and evil.  His goal with this person is to scare them into committing heinous acts, and turning full on evil.  It’s said that the Friday The 13th Demon Specter is responsible for the creation of several serial killers!