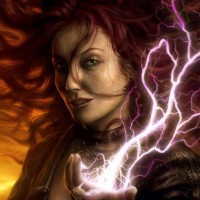 An eclectic iridescent array of magic mortar fire shimmered, and glimmered about rattling the very foundations of our offices as everyone scattered for defensive positions in the battle against the blasphemous Brimstone, Sorcerer Of Shadows.  He stood his ground deflecting the magical volleys via his dark super charged metaphysical energy aura while taking his time to build up large energy orbs in his hands.  Once complete these green glittering spheres were lopped at us with extreme prejudice causing desks, file cabinets, and walls to be blasted away.  So much for our last remodeling project! In order to have more magical fighting power Demi-Mermaid Witch Rebecca Abernathy refrained form using her defensive Mystic Sphere shield, and instead concentrated everything she had into the pink lightening she shot forth from her hands. A power she receives by calling upon Fulgora, the Roman Goddess of Lightening along with Thor, the Norse God of Lightening & Thunder. She actually met Thor himself recently in her battle with the Friday The 13th Demon Specter.

Vampire Drake Alexander has drank the blood of magical practitioners before in order to temporarily mimic their powers. However in Brimstone’s case a Sorcerers blood is something different.  The powers are truly marshaled directly from the mind rather than the body. So Drake had the power potential without the exact knowledge how to completely access it.  Drake did manage to create some decent sized energy balls to lop at Brimstone along with amplifying his demonic vampire aura for metaphysical shielding. Thomas, the Pyrokinetic Protege of the Sorcerer Brimstone, proved to be quite amazing as he whipped up fireballs to shoot at the Sorcerer.  He also created deeply distracting mini fireworks around Brimstone that had somewhat of a blinding effect. I, Xavier Remington, even entered the fray courtesy of some borrowed magical power from Rebecca.  Usually humans can’t take too much lent power but for reasons not fully understood I’ve always been able to withstand a great many supernatural things I shouldn’t.  Ghostbuster Rob Edmunds let loose his quantum particle disruption gun used for malevolent spirits while Ex-Navy Seal Hunter Jackson actually shot his machine gun at Brimstone.  Unfortunately both the quantum gun, and machine gun bullets bounced off Brimstone’s diabolical aura shield. Psychic Julia Hathaway wasn’t able to budge his shield much by using her Telekinetic powers to launch furniture at him. Bionic boy wonder Zack Powers couldn’t get close enough to use his cybernetic abilities, and failed at attempting to use Father Tom’s holy water, and other Christian artifact measures.  We knew Brimstone would forego calling upon any demonic powers, and rely only on his Sorcery.

Brimstone began weakening under the multiple mystical assaults, and began bolting about from room to room seeking shelter behind furniture, and walls when convenient.  He then began to use guile by astrally projecting false versions of himself in an attempt to fool us.  Naturally those of us with enhanced senses, especially scent, were not fooled by this.  Although it was distracting, and eventually the supernatural shooting died down as we slinked about cautiously after losing track of Brim.  Nothing but the sound of dangling flickering light fixtures crackling with electricity, and small fires some of us put out with extinguishers.  Thomas was able to snuff out flames via his fire manipulation powers.  Other than some scrapes, and bruises we had fared well thus far. Unbeknownst to us Brimstone himself was actually sitting in the cafeteria sweating profusely while sipping a Diet Coke.  His own protege Dimitri Diablo, current King Of Hell, was notorious for consuming only Diet Cokes, and nothing else.  Seriously we have no idea where it came from because we don’t stock our vending machines with that vile chemical brew! For the love of God just drink the regular Coke! It isn’t going to kill you! LOL!

Brimstone made his way to the basement level, and entered Dr. Ashley Abercrombie’s lab where the voracious shark toothed little Chupacabra she released was still devouring one of Brim’s henchmen. The Chupa turned around glaring at him with it’s dead black eyes while making unholy guttural hissing noises.  The creature shot at the Sorcerer, and he caught the thing by the neck snapping it instantly.  Then he actually bit into the demonic reptile draining it of it’s blood.  Clearly obtaining sanguine energy from it like a vampire.  Brimstone proceeded to make his way to the sub-basement walking into the Cryptid Containment Area teaming with caged paranormal life.  He began ritually sacrificing them one by one while painting demonic symbols about the room in supernatural blood.  It seems he was going to call upon demonic powers again.  He knew he had only one shot at us as he risked the use of religious symbology to neutralize him.  Ashley was behind some cages, and attempted to sneak up on him with a large machete.  However he shot her with deadly demonic energies effectively killing her….or so he thought.  As a Demi-Zombie Ashley can’t be killed so easily.  Despite self-resurrecting she continued to play dead which is easy for her since she can keep her heart, and breathing to nearly zero. None of the remaining Cryptid creatures roaming about the room bothered her since most paranormal entities loathe zombies.

Brimstone had knocked out our internal surveillance grid, and was magically cloaked so we had to do a pain staking room by room search of our entire facility.  Meanwhile Brimstone had completed his dark ritual, and was setting an explosive enchanted trap for us!  He teleported upstairs in our administrative assistant area outside our executive offices.  There he set-up his metaphysical mayhem, and lured us upstairs by bellowing his voice about the office taunting us.  We all came upstairs where it was virtually dark except for the daylight coming in from the windows of the outer offices.  Suddenly he popped up from behind a desk screaming,”Diabolica Displodo!”  Next there was a blinding neon orange explosion that caused the collapse of the entire second floor.  We all plummeted downward as the floor turned to dust.  Brimstone was levitating above us cackling maniacally with glee while smugly looking down upon us.  Some of us were briefly knocked out while others were dazed.  Brimstone then proudly exclaimed,”Come now you amateurs really thought you’d destroy the greatest Sorcerer on Earth! The Master Of Magic Brimstone!  Now you shall all die!”  Purple electrical bolts began shooting around him 360 degrees supernaturally shocking us lying below.  We writhed in paranormal pain as the bolts made contact with us! It seemed it was finally the end for us at Mystic Investigations.  Our luck had finally run out!

Amazingly at that moment our second greatest nemesis next to the Devil himself appeared in a ball of tortuously screaming flames.  It was King Of Hell Dimitri Diablo.  Apparently after Brimstone left his blood sacrifices behind Ashley accessed the residual magic to summon Diablo.  The demonic power Brimstone called upon was Devil based rather then Dimitri Diablo based so she altered the ritual a bit to change that.  Brimstone was Diablo’s protege who betrayed him when he was a Sorcerer himself so Ashley hoped he’d want some revenge.  Brimstone was shocked by the appearance of Diablo.  Diablo bellowed,”You traitorous scum!  You think you’re the greatest magical master on Earth!  No you silly little twit that title would go to me. Your Master Diablo!”  He immediately shot concentrated hell fire at Brimstone causing him to crash to the ground with a loud thud.  Brim got to his knees looking upon Diablo with disdain as he muttered,”You bastard!”  Diablo chortled, and replied,”You horrendous hypocrite!  You turn on me yet you expect your underlings to remain loyal to you!  I think you should come back to me Brimmy!  Join me in my new home within the very bowels of hell itself where you belong boy!”  Brimstone showed fear in his eyes for the first time, and answered,”I’ll die before I’ll serve you again!”  Brimstone shot a volley of green glittering energy at Diablo but he merely absorbed it, and shot red waves back that engulfed Brimstone. Diablo exclaimed,”Killing you would be a waste.  You have great potential.  You just need the proper discipline!”  Brimstone screeched in terrified agony before fading away into nothing. Diablo had in fact sent him to straight to Hell!  Left behind was Brimstone’s Sorcery robe.

Diablo stood among us in his glittering gold gown smirking as we started to get up.  However he snapped,”No please I must insist you bow to your King!”  He used some manner of telekinesis to force us back to our knees.  He bent over, and pulled a can of Diet Coke from Brim’s robe lying on the ground.  Diablo took a sip, and uttered,”Ah yes my sweet Aspartame! Nectar of the Gods! It’s been so long!” We looked at him like he was deranged. He then said,”It’s amazing how many times Mystic Investigations has inadvertently helped me! I thank you again! I’ve wanted Brimstone for quite some time but you know I’ve been busy with the war going on in Hell.  Those pesky demons loyal to the Devil are really quite a pain!  I’d be eternally grateful if you ever weakened him, and gave me an exact location as you did with Brimstone!  Thanks again, and may the forces of Hell roast you sweetly in your nightmares!”  He then snickered, snorted, and howled before disappearing into a two story high pillar of unholy flames.

We stood on our feet again shocked that the King Of Hell saved us!   I then turned to Thomas, and said,”Well I guess you’re free of Brimstone forever! What will you do now?”  Thomas replied,”I want to find all the people Brimstone has kidnapped, and trapped at his various hide outs around the world.  Then free them from his henchmen, and teach them how to use their powers to fight for the side of all that is right!”  We wished Thomas good luck in his quest, and told him we were here to help him if he needed it.  After he left we called in some top flight construction crews who worked 24-7 to restore our offices to their former glory within 2 weeks! This time the internal walls were given tornado proof properties like the external walls.  I mean seriously we’ve had to repair our offices a dozen times already!

Before Thomas left he acquired Brimstone’s secret journal from his discarded robe, and learned how to access more of his Pyrokinetic powers to the point of flying amid his furious flames somewhat like the video below. If you ever see a flaming humanoid flying across the night skies it could very well be Thomas The Pyrokinetic Master!