The blasphemous Brimstone, Sorcerer Of Darkness, and former apprentice of the current King Of Hell Sorcerer Dimitri Diablo, magically blasted through the glass entrance doors of Mystic Investigations headquarters.  Amid the flying shattering glass he violently vociferated,”Mystic Investigations release my protege, and I promise nobody will be harmed! Keep me waiting any longer, and you shall all surely die!” Through the Sorcerer’s remodeled front entrance six of his henchmen entered all armed with swords.  Brimstone, dressed in his ceremonial Sorcerers robe, ordered them to scatter, and find everyone.  Brimstone himself walked behind the Receptionists desk, and activated the intercom system broadcasting his demands once again.  At that moment an old portly woman waddled in, and meekly said,”I have a Gnome in my basement.  He refuses to leave. He scares the hell out of me! Can you help me sir?”  Brimstone calmly replied,”My dear woman why on Earth would you want to get rid of a Gnome?  Consider it a blessing, and offer it plenty of children to eat.  In return he will defend you against any threat, and take out anyone you may find undesirable.”  The woman was speechless for several seconds before replying,”Ah ummm thank you sir.”  She turned around, and waddled out the door with a puzzled look on her face.

Meanwhile in the cafeteria foolish two henchmen stopped to smash in the vending machine in order to commandeer some candy bars as they commented they didn’t get paid enough to work for “that nutty Sorcerer”.  As they enjoyed their chocolate delights Executive Vice-President, and 700 something vampire Drake Alexander exited a secret panel in the wall quickly dispatching the two men with extreme neck snapping prejudice.  I confronted a henchman in the gym with the old bar bell to the head maneuver.  Zack Powers, the bionic boy wonder, took down one in the research library after he launched him through a wall. Julia Hathaway, our telekinetic psychic, sent another one crashing out a second story window.  Brimstone walked slowly about our facility calling out his protege’s name,”Thomas stop hiding behind these fools, and come out here to face me like a man!  It’s time to come home! We can work this out son!”  Thomas was hiding in one of our secret safe rooms with the fair witch, and Demi-Mermaid Rebecca Abernathy who swore to protect him from the dark dastardly Brimstone.

A fifth henchman was amid our rooftop garden when he spotted the Mysticopter on the helipad.  He reported back to Brimstone on his communicator that the engine was warm, and we were probably going to use it to escape. At that moment pilot,and Ex-Navy Seal Hunter Jackson polished off the lackey of evil with the non-business end of his machine gun.  The sixth henchman entered Cyptozoologist Dr. Ashley Abercrombie’s supernatural laboratory.  Near a cage behind him on the other side of the room Ashley uttered,”Say you ever seen a Chupacabra up close, and personal?”  The henchman swung around, and said,”What!?!” Ashley ripped the cage open, and the little shark toothed devil darted out making a bee line right for the mans throat.  Screams bellowed forth as Ashley exited her lab while saying,”I guess not.” 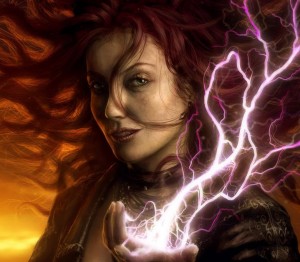 dead air.  He muttered to himself,”Damn I knew I should have given them guns instead of swords!” Brimstone then roared,”Enough games Mystic Investigations!  I’ll tear this place to the ground until I find Thomas!”  He began shooting off concentrated metaphysical energy volleys from his hands blasting through furniture, walls, and ceilings.  Drake Alexander crashed through the ceiling on to the Sorcerers back, and bit into his neck drinking of his magically imbued blood before being repelled by a supercharged chakra aura shield.  Drake arose smiling now that the ingestion of Brim’s blood gave him temporary magical powers. Rebecca, and Thomas entered the scene at that point standing together with the rest of us behind the magical trio.  Drake then said,”I’ve got your magic for a bit now so I might as well use it.”  Brimstone cackled maniacally,”You think a juiced up vampire, a pathetic witch, and a photo-pyrokinetic boy are any match for the greatest Sorcerer on Earth?”  Rebecca chuckled, and replied,”I’m going to enjoy shearing that ego down to size you filthy pig!”  An iridescent array of magic shimmered, and glimmered about rattling the very foundations of our offices as we all scattered for defensive positions…

We met Thomas on July 4th when we discovered he was a photokinetic–pyrokinetic hybrid who was single-handedly putting on our towns fireworks show.  On the run from his former mentor the Sorcerer Brimstone who offered him safe haven.  We hope everyone had a Happy Independence Day!