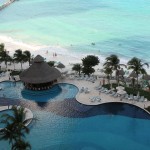 We arrived in Cancun early Thursday morning on April 24th.  Upper 80’s by day, and mid 70’s at night seems to be the normal temperature here.  A little too hot for me especially with the humidity.  However the brisk ocean breezes help, and the scenery is breathtaking!  The ocean side resort we’re staying at is also where the 2014 North American Paranormal Investigators Conference (Para-Con) takes place in the convention center.  Our entire team had a block of ocean view rooms reserved, and once we checked in yesterday morning we all immediately went swimming in the ocean.  Well everyone except our vampire associate Drake Alexander who did get a rare million dollar bottle of Gnome blood shipped in. Gnome blood allows vampires to exist in direct sunlight for at least a few hours.  He’s saving it for later but he did take a few drops so he could lounge under the shade of a tree nearby the beach.

A number of women on the beach were topless so naturally our Demi-Mermaid Witch Rebecca Abernathy decided to toss her top as she made a bee line to the sea.  For some reason everyone’s eyes were averted to her despite several other women exposed for the world to see.  Rebecca is notorious for frolicking about with nothing on yet the male members of our team never seem to grow tired of it.  Our Psychic Julia Hathaway also threw caution to the wind for the first time.  The Caribbean Sea is a little too close to the Atlantic, and I worry about Atlantis royalty kidnapping Rebecca when she swims.  They have tried to kidnap her, and her mother in the distant past since they did not approve of her marriage to a human.

After the beach we had a complimentary brunch at the hotel where many of the Para-Con attendees were dining.  We met one of the most prominent supernatural investigations teams in the area called Yucatán Supernatural Sociedad which is run by President Pepe Lopez.  Lopez is Mexico’s most renowned Chupcabra hunter, and an accomplished zombie slayer as well.  Our information booths were right next to each other at the conference that brought in many from the supernatural community around Canada, USA, Mexico, and Central America.  Para-Con features paranormal professionals highlighting their products, services, and research information.  Lopez even had a live Chupacabra in a cage on display, and later he released it into a glass enclosure where he demonstrated wrangling, and capture techniques.  After the first day of the conference was over we all went to dinner, and ended up back on the beach well after dark so Drake could swim in the ocean.

Then my worst nightmare almost happened.  Rebecca was out in the nocturnal surf when she screamed,”What the hell!”  Drake yelled,”Mermen!” as he swam toward her.  She was struggling with two extremely muscular Mermen enforcers.  The rest of the team, and I swam out as quickly as we could.  Zack, our bionic boy wonder, got there after Drake who was fighting one of the fishy men.  Being a Demi-Mermaid without fins Rebecca was at a disadvantage as the other Merman telepathically suppressed her Mermaid hydrokinetic powers while covering her mouth so she couldn’t say,”Mystic Sphere” to activate her powerful energy protection bubble.  Zack punched him in the face, and his grip was released.   Rebecca then kicked him in the chest sending him flying back through the water.  I could see lights emerging from the water.  It was a strange looking submarine that looked like a chunk of coral reef.  Several Mermen shot out from the half submerged portion of the vessel.  One pointed at Rebecca, and commanded,”Get the hybrid Princess!”

Drake’s eyes glowed red as he growled sinking his teeth into the Merman partaking of his blood, and temporarily assimilating his powers.  This included Drake transforming into a vampire Merman which was last seen in a few months ago in Paris when he drank Mermaid blood.  He also possessed Hydrokinetic powers in addition to his extensive vampire abilities.  He took the Mermen hoard head on, and the rest of us grappled with the few who got through.  Rebecca then yelled,”Mystic Sphere” causing a translucent pink energy bubble to form around her just as three huge Mermen were about to grab her. Zack picked up one in each hand,and tossed them a good 20 feet away. The third one made a hydrokinetic water spout sending Zack swirling several feet into the air before being thrown on to the beach.  Rebecca sent an electrokinetic bolt to hit the Merman, and he sunk into the water.  She then called upon the Goddesses to begin an assault upon the submarine.  Julia held off a few Mermen with her telekinesis but they used zoopathy to summon a shark to attack her!

Rebecca halted her sub attack, and swooped in countermanding the shark to attack the Mermen who bellowed out in pain.  She then picked Julia out of the water into her floating energy sphere.  Unfortunately a blue bolt of waves came from the sub popping the pink energy bubble causing both women to crash into the warm waters.  I was attempting to perform Kung Fu in the water with the one attacking me but a violent whack from his fin sent me flying back to the beach next to Zack.  We both ran back into the water as Hunter, Ashley, Rob, Seth, and the rest were in peril.  Only Drake was making waves against the Merman menace.  Unfortunately there was too many of them, and they summoned several sharks to attack Drake who was torn to shreds.  All hope was lost until a surprise rescue came in the form of Adonia, our Amazon warrior friend.  She roared up on a jet ski while letting loose the glass shattering Amazon war cry with sword in hand.

One of the Merman actually said,”Oh my Poseidon!  It’s an Amazon!”  Adonia responded,”That’s right bitch!  Feel the wrath of women scorned across the world!”  She went right ahead, and lopped his head off causing blue blood with a slight glow to permeate the water.  This caused the sharks to swarm upon him rather than Drake who was pretty much a lifeless lump.  They went into a feeding frenzy on the Merman to the point of not being controlled by Faunapathy anymore.  She picked Rebecca up, and they rode around on the jet ski kicking Merman tail while they both said a magical spell together that called forth a flurry of Nereids, aka Sea Nymphs. Soon ghostly visions of beautiful women rose from the waters that grew violent with waves as a thunderstorm came in suddenly.  Miraculously we all seemed to have a protective bubble around us because the pelting rain, hail, and waves didn’t touch us but severely attacked the Mermen.  Then the submarine was crumbled into pieces amid the crashing waves causing the remaining Mermen to submerge, and flee back to Atlantis hopefully.

Just as quickly as the chaos started everything was calm again, and the skies clear with stars.  Everyone was back on the beach safely including Drake who was healed faster than usual by the Sea Nymphs. A group of Nereids took complete physical form speaking with Adonia, and Rebecca.  They agreed to watch over Rebecca whenever she was in the sea as a personal favor to Adonia, and the Amazon people.  It seems allegiance to womankind overrides any allegiance to Poseidon, and the royal regime of Atlantis that worships him.  They said if they faced any wrath from him they would get support from his sea goddess wife Amphitrite.  Although they’d rather not have the two fight because that causes massive hurricanes, and typhoons out of the sea nymphs control.  They also said they would reanimate the beheaded Merman, and convince him to realize the Atlantean royals aren’t right to demand everyone stay in the sea.  After all they are descended from land dwelling humans on the lost continent of Atlantis. After the Nereids left we all went to sleep.  Well except for Drake who went to some night club.

Adonia stayed the night before leaving for a mission in Panama.  It was the fate of the 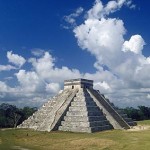 Goddesses she happened to be passing through Mexico when she sensed Rebecca was in danger.  Unfortunately our psychic Julia couldn’t sense the danger from the sea.  Para-Con continued the next day until early afternoon when it was adjourned for a paranormal field trip to various places including the Temple of Kukulkan, a Mayan Pyramid at Chichen Itza.  Tourists aren’t allowed inside the ancient step pyramid anymore but Para-Con got special permission from the Mexican government. Okay we may have paid off some officials but for the record we don’t admit to anything. 🙂

As we made our way through the narrow corridors of the dark stone pyramid Julia got a strange vibe, and led the Mystic Investigations team off from the main Para-Con group.   Pepe Lopez saw us walking away, and joined us as well. We uncovered a hidden doorway.  Drake coughed loudly, and punched a giant hole through the stone it since it wasn’t apparent how to open it.  I then laughed, and said,”If anyone asks the wall was already broken.”  🙂   Everyone chuckled as we entered a secret passage, and flipped our flashlights on.