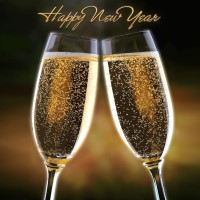 Our New Year’s Eve Party almost went off without a hitch except for the resurfacing of the supernatural nut known as Percy Allen.  A skinny balding thirty something virgin with a comb over, and whose height was 5′ 5″ even with his shoe lifts! He’s the paranormal investigator on the fringe who tried to expose Drake Alexander to the world as a vampire at the Paranormal Investigators Conference(PARA-CON).  It was minutes before midnight on New Year’s Eve 2010 when everyone gathered in the large foyer of the stately Remington Manor as me and the Mystic Investigations team stood on the upstairs balcony above.  We were ready to toast the New Year with bubbly champagne in hand.

Drake stood on the edge of the group nearest to the bedrooms when all the sudden Percy Allen comes running out of my upstairs hallway screaming,”Drake’s an evil blood sucking vampire!”.  He throws some holy water on Drake and again nothing happened like at PARA-CON.  Although this time we assume it was real holy water but the protection spell on the house prevented it from causing any harm to Drake.  However if it had been potent enough it would have overridden it since protection spells aren’t as effective on vampires, and other members of the living dead! Everyone starts laughing as Percy whips out a cross and touches Drake’s face with it. Drake felt a slight burning sensation but in everyone’s eyes Percy looked like a complete New Years Nutcase!  The stroke of midnight came at that moment and everyone rejoiced in the New Year 2011.  As the party goers laughed and cheered Drake grabbed Percy by the arm dragging him into a bedroom while he screamed,”He’s going to kill me !  HELP!”  Nobody heard him over the noise of the crowd. One guy screamed,”Man that scrawny little spaz was hilarious Xavier!” I smiled, and nodded,”Yes we paid him $20 to put on a little show for you!”

I announced the fireworks would be starting in my backyard along Luminary Lake and the crowd began to mill outside. Others went into the poinsettia laden greenhouse to watch the fireworks in warmth.  The rest of the team, and I went into the bedroom.  Percy was hysterical as he screamed for help and hurled vile insults at Drake.  When he saw Rebecca he yelled,”Get away from me you filthy witch!”  Finally Drake slapped him in the face and yelled at him,”Calm down you little brat!”  I informed Percy the room was sound proof and nobody could hear him.  Percy then calmed down to an extent and said,”How dare you still live and never age while my mom has passed on!  Her ghost told me you killed her you son of a bitch!”  Drake was shocked, and then replied,”You’re little Percy from St.Louis?  I knew there was something familiar about you.”  Percy answered,”I’m not so little anymore bastard!” Rebecca snickered, and said,”Wow you grew a whole three more inches!”  We chuckled, and Percy angrily continued,”You stole my mom away you vile monster!  You invaded my home, and ruined my childhood you demonic piece of crap! Rot in hell you bastard!”  Drake looked somewhat hurt as he exclaimed,”I only killed the two men who broke into your house when you were a kid.  They had already killed your mother before I got there.  I loved your mother and would never hurt her.  I also thought of you as my son Percy, and enjoyed our time together.”  Percy then screamed,”YOU LIE!  You’re a demonic blood sucking minion of hell who cares for nobody but his own sick sanguine lust!  I believe the ghost of my mother over you any day of the week!”

Drake then said,”Percy I must confess something to you.  Your mom didn’t die that night.  I brought her across into the veil of eternal darkness I live in.  I selfishly turned her into a vampire because I couldn’t let her die.  Most likely you’ve been talking to her as a vampire, and not a ghost. I’d have felt if one of my offspring died.  She has most likely been using her mind control powers to make you think you’re seeing her as a ghost.” Percy was speechless, and looked shocked as he listened to Drake say,” I unfortunately wasn’t thinking straight because many vampires are evil and by bringing her across I risked turning her into something very vile in nature.  She had contempt for me not letting her die and the dark demonic DNA within her took over! That’s why she didn’t stay to raise you.  I believe she is now using you to get to me.”  Percy then yelled,”You speak blasphemy!  How dare you say my mother is a disgusting denizen of darkness!  I had to grow up in abusive foster homes because of you!  I hope you burn in hell for eternity you lying bastard!  I won’t rest until you’re exposed to the world or dead!”

Drake said he was sorry Percy felt that way but the truth was the truth and he had to accept that.  Some of us discussed it and Rebecca decided to cast a spell on Percy to make him lose all memory of Drake.  We took Percy down the hall into my study, and then into a secret passage behind the bookcase which led to Rebecca’s Witches Lair in the basement.  A place where she mixes potions and practices various wicca spells from the prying eyes of the public.  Percy had been kicking and screaming the entire way down and once he realized what we were going to do he got even more agitated.  Drake and Hunter Jackson, our Ex-Navy Seal, held each of his arms as Rebecca mixed a tricky memory targeting potion.

Percy calmed down some and said,”My arms hurt.  Please let go of me.  I’m obviously not going anywhere locked in this despicable dungeon.”  Drake nodded and Hunter let go of him. Drake then somberly said,”Percy this is for the best.  We need to put this behind us.”  Percy replied,”I still don’t believe you but I guess there’s nothing I can do about this anyway.  Well except this you malicious murdering monster!”  He then took a small vial of glowing green liquid out of his pocket and smashed it on the floor as he bellowed forth,”Tonatiuh gero continuo sol solis eradicate malum!”  Suddenly a small sphere of light that looked like a little sun appeared near the ceiling and Drake began to painfully scream as smoke rose from his skin everywhere.  Then Percy yelled,”Yes you foolish bastards Percy knows a little magic as well!  Myrrdin planto mihi evanui abyssus!”  At that point Percy suddenly vanished into thin air in a puff of purple smoke.

Drake had already dove for cover under a table just as the micro holy Sun finally disappeared.  It had made the basement lair instantly boiling hot, and we were all sweating like pigs!  Drake emerged from under the table looking like he had been burnt by a fire but then the burns began to fade as he sat in a chair to rest.  I then said,”Rebecca what the hell happened to the protection spell!”  She then said,”It actually doesn’t extend to my lair so I can work on various spells unhindered.  The real question is how the hell does he know such powerful magic?  I can’t even make a micro sun appear!  My Goddess I think there was actual nuclear fission taking place in that little light!”  I replied,”He had to have some powerful help.  There’s no way he could have figured out those spells on his own.”  Rebecca conjectured,”The little bastard was probably juiced up on borrowed magic!  It’s the only explanation. That little creep wouldn’t be capable of that level of power even if he practiced for 100 years!”

Within minutes Drakes bright red skin turned back to fair white as we headed outside to catch the end of the fireworks show.  In the shadows of the Enchanted Woodland Percy watched us and whispered to himself,”Damn you Drake I’ll get you if it’s the last thing I do!  Even if I have to spend every last penny to hire those filthy witches to imbue me with more of their vile magics. You’re 700 year reign of bloody terror will come to a close very soon!”  In the brush nearby a female vampire watched Percy and whispered to herself,”Yes Percy my son get that bastard! Then you will join me in the dark eternal shadows as well.”