Posted on June 20, 2014 by Paranormal Forecaster 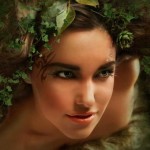 The Summer Solstice is upon us, and sensual supernatural beings are afoot!  The time of the Spring supernaturals passing on their nature duties to the Summer supernaturals. Tomorrow at 10:51 Universal Time. or 4:51 AM Mountain Standard Time, the northern hemisphere will receive the most sunlight beckoning forth the summer supernaturals.  This includes a plethora of Solar Gods, Summer Goddesses, Summer Nymphs, and other nature nymphs worshiped by various witches, and other practitioners of magic around the world.  In particular those of the Wicca faith celebrating the holiday of Litha which is also called Midsummer. Many of these Nymphs, and some Goddesses, will take rare corporeal biological form in the Witching Hour of the Solstice until Midnight the following day.  Those deities honored in magical ceremony will be more likely to appear the longest in physical form while others may only appear as ghostly specters sauntering about desolate rural areas sensually.  The 12:00 AM witching hour, the exact minute of the Summer Solstice, 12:00 PM Noon, and the minute of Midnight the next day will be your best opportunities to catch a possible glimpse of these lovely ladies that keep nature running smoothly.

Forests seem to be the most frequented venues of nature nymph manifestation during this time.  Bodies of water in particular are generally a focus of paranormal activity.  Clearly if you spot a transparent specter that appears as a beguiling beauty draped in foliage wearing next to nothing then it’s probably a nymph or even a goddess.  The same goes for a physical woman just randomly walking about the woods wearing nothing but sparkling foliage, and perhaps a transparent dress of some type.  If you’re lucky enough to spot such a thing then odds are in your favor, and it’s probably a nymph.  Of course there is a very slim chance that it’s an extreme nature lover, or even a mental patient.  Not many women adorn themselves in leaves, or walk around naked, deep in a forest.  Especially if it’s the middle of the night.  At some point they should give off mystical glimmering light that may include leaving a trail of sparkles on the ground behind them.

Nymph’s are generally harmless as long as you approach them peacefully, and don’t startle them.  More than likely the mere act of spotting them means fate wants you to meet her, and what happens after that will pale in comparison to your wildest fantasies as you live out a supernatural dream!

I'm the President of Mystic Investigations. A private paranormal crime fighting organization out for supernatural justice in a world full of supernatural darkness.
View all posts by Paranormal Forecaster →
This entry was posted in Goddesses, Gods, Nymphs, Summer Solstice. Bookmark the permalink.