Posted on July 10, 2014 by Paranormal Forecaster 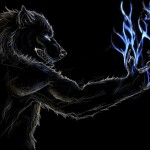 The Full Moon of July has a variety of names in the mainstream of different cultures.  These include Summer, Rose, Buck, and Thunder Moon.  However in the world of the supernatural we realize that the large number of July thunderstorms yields unusual effects on Werewolves.  That is why paranormal investigators, and Werewolf Hunters, will refer to it as the Lightning Moon despite that being one of the names for the August Moon in some places.  Also some might still refer to it as one of the mainstream names.  The Thunder Moon.

Under non-thunderstorm conditions the Lightning Moon causes no unusual effects on Werewolves.  However during a thunderstorm, especially one with many lightning strikes, there is a good chance for Electric Werewolves to form.  The lunar energies that charge the Werewolves supernatural electromagnetic aura causes them to be drawn to lightning.  This particular Moon’s mystical energies are affected by the high number of thunderstorms on Earth that create their own magical energies.  Werewolves will try to climb to higher positions, or get out in an open field with the hope of taking a lightning jolt.  Lightning is also more attracted to all supernatural aura’s with the Lightning Moon Werewolf being at the top of the list.  Once hit by a lightning bolt the blasphemous beast will be supercharged in power causing great increases in strength, speed, and agility.  Their violent aggression will also be deeply magnified.  They will also appear larger as their fur stands on end with random bolts of colorful electricity jumping to, and fro.  Getting too close will cause you to be paranormally electrocuted!  In addition their demonic eyes will glow erratically like a wild flickering candle.

During the day throughout the Full Moon from 100-80% such Werewolves will experience random Electrokinetic powers in human form.  Any human who is bitten under this Moon will not only become a Werewolf but also have permanent Electrokinetic powers that can eventually be controlled.  However without their human persona in Werewolf form the power would either not exhibit itself or be minimally random at best.  During the Lightning Moon such special Werewolves would however exhibit the violent electrical charging regardless of any thunderstorm.

During this Full Moon we definitely recommend not venturing out during thunderstorms.  In areas with high levels of Werewolf activity we recommend locking yourself in a Faraday Cage.  Werewolf Hunters are known to wear special Faraday Cage Suits during the Lightning Moon.

Most of the normal Lycanthrope repellents will work but Holy Water will be the most effective due to the electrocution factor.  Dousing a hairy horror from a safe distance with a holy super soaker will cause a supernatural electrocution thereby rendering the Werewolf unconscious so you can make a quick getaway or capture the beast for safe keeping.  Remember they are still humans by day, and killing is to be avoided at all costs!  Just realize the water has to be genuine holy water because normal water won’t have any affect on them!

Now as if that wasn’t bad enough this Moon is also a Super Moon! This means lunar energies are magnified due to the Moon being closer than usual to the Earth.  Super Moon Werewolves are hulked out to an even larger size with extreme muscular definition as if on supernatural steroids.  They also become more brazen, and will venture into urban areas looking for fresh meat.  Clearly Werewolves do live in cities but when they transform there they usually hide in back alleys, parks, and sewer waiting for prey to pounce upon. So even without a thunderstorm in your area you are going to want to seriously stay in a building surrounded or adorned with Wolfsbane, silver, holy water, etc.

I'm the President of Mystic Investigations. A private paranormal crime fighting organization out for supernatural justice in a world full of supernatural darkness.
View all posts by Paranormal Forecaster →
This entry was posted in Lightning Moon, Super Moon, Werewolves and tagged July Full Moon, Thunder Moon. Bookmark the permalink.