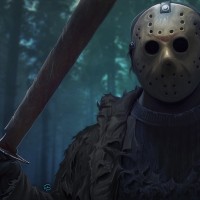 Friday The 13th spawns global Paraskevidekatriaphobia, aka the fear of Friday The 13th, along with Triskaidekaphobia, fear of the number 13 itself.  These fears foment into a sub-conscious spirit within the human collective consciousness causing increased bad luck, and dark metaphysical energies.  Thankfully like many spirits created by the human collective thought process, it’s not a conscious entity.  Certainly a pure sapient manifestation of dark luck would be a frightening force to be reckoned with! What we have are metaphysical maelstroms that ghosts, poltergeists, demons, dark practitioners of magic, and even Clurichauns, aka Anti-Leprechauns, feed off of to increase their powers, and potential for mayhem in our physical world.  There has already been a steady increase in paranormal activity throughout the day. Expect things to get worse as we enter long dark unlucky night!

The Rise Of Jason!
That brings us to the vengeful spirit of the infamous paranormal poster child of Friday The 13th who inspired the series of films bearing said name.  He is none other than Jason Voorhees, a former human, several times a Zombified Demi-Demon, and currently a ghost who can transmute to poltergeist form when enough energy is present.  Certainly reports have been coming in all day of Jason’s ghost being sighted around several US lakes.  Now in the last few hours reports of violent interactions with objects, and people indicate he’s ascended to poltergeist status.  Rumors are quickly spreading that Jason is being metaphysically fueled by a coven of dark warlocks, and witches who are members of the Voorhees Cult.  A misguided group of dark magicians who worship Jason, and marshal the forces of dark luck on Friday The 13th’s in the hope of resurrecting him.  Apparently for the past two years they’ve been channeling the collective powers of the Tetrad Blood Moons, the Halloween Blood Moon, Halloween itself, and All Souls Day Of The Dead.  All of which will culminate today!  Such a massive metaphysical power channeling spell over a large span of time would require a large collection of crystals to store supernatural energies within.

near a lake somewhere in the United States. However it will not be Crystal Lake since any lake with that name is being staked out by private paranormal investigators, and even the US Paranormal Defense Agency who has Jason at number 10 on their Paranormal Most Wanted List.  The wayward dark ritual could occur at any time since there’s no specific power hour for Friday The 13th.  Most likely it would be just before Midnight on Saturday the 14th since the enchanted dark energies of the day would have built to their peak.  We advise everyone to steer clear of lakes in the USA.  If you see people wearing dark robes, and chanting near a body of water please contact your nearest supernatural crime fighters, or good practitioners of magic. Do not attempt to confront these people on your own! They are beyond dangerous, and wield the powers of black magic, and dark luck!

Should Jason manifest in biological form there is no known repellent.  Aggressive dismemberment, or complete incineration in fire are the only known ways to stop him!  The average person should simply run in the other direction as fast as their feet can carry them!

Learn More About Jason Voorhees | Get The Complete Friday The 13th Movie Collection!