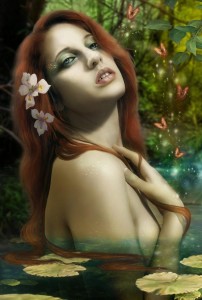 The widespread unseasonably warm temperatures across North America has seemingly cut winter off short, skipped spring, and gone straight to summer.  These hot temperature are the product of increased Nymph activity.  Nymphs are minor female deities who are the spirits of our environment including the sky, land, and water.  They have worked on behalf of Gods in the past but ultimately they are free spirits who follow their own path within their particular element such as the water nymph pictured to the left.  They are mostly good Goddesses of nature who work to keep harmony, and balance to our environment.  With each passing decade they must work harder to keep the Earth healthy due to humankind’s ravaging of the environment.  Although their work look more like play as they dance, and sing while iridescent glitter, and flowers floating from their beautiful forms.  That is if you’re lucky enough to spot one of them.

Some time ago they pledged their undying allegiance to Mother Nature, aka Gaia, who is the Goddess of Earth.  In essence the very soul or life force of our planet.  This did not sit well with many Gods.  Especially Pan, a nature God, who feels he has power over the nature nymphs.  So he has sent his Satyr minions after them in an effort to magically shackle them into servitude for him, and his Godly friends.  Satyrs have various ways of tricking Nymphs into their web of deceit. The usual way is to play their magical pan flutes which coax the joyful Goddesses of nature into dancing, and singing.  This lulls them into a vulnerable state ripe for capture by the forces of evil who could really care less about Mother Earth.  In recent weeks Pan has ordered an extremely aggressive campaign against the Nymphs with Satyrs in hot pursuit driving the girls from down south into North America prompting an early spring, or summer to occur in many cases.

Humans have nothing to fear from any of these beings who are invisible to us most of the time.  However dangerous weather could occur during this struggle for dominance over natures free spirits.  Due to the turmoil, and stress on the Nymphs we are getting reports of them being visible in some cases.  They will appear as the most beautiful women you’ve ever seen.  Often dancing about naked wearing nothing but flowers, and foliage.  Sometimes wearing see through glittering gowns of varying solid colors.  At night they might have fluorescent glow around, and leave a trail of glittering light behind them.  If they make eye contact with you it’s possible you may be seduced by their other worldly allure.  Certainly their siren song can lull anyone into a hypnotic state.  That includes females as well.  The purpose of the seduction would be to find a temporary refuge by hiding among humans.  Should a Satyr appear during this time you should be prepared to pretend you don’t see them so  you can surprise them with a sucker punch.  Then grab their pan flute, and blow into the wrong end of it.  The reverse melody will make them instantly disappear.