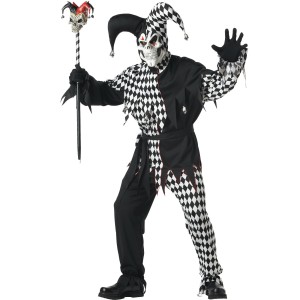 April 2nd is Anti-April Fools Day and with it comes the evil mischief of the April Anti-Fool aka the Chief nemesis of The April Fool who blesses us with humiliating yet humorously harmless hijinks on April Fools Day (April 1st).  Although the two are enemies they are temporally separated in a four dimensional manner confined to their respective days which from their perspective lasts one whole year.  Unlike the April Fool, the Anti-Fool can be very dangerous in nature and his so called pranks can be extremely dangerous and diabolical.  The Anti-Fool has equivalent magical powers, including mind control, and enhanced superhuman abilities like The Fool.  The Anti-Fool wears a black and white jesters costume complete with magical scepter that has a skull at the top.  He also wears a skull mask to hide his identity along with being an intimidation tool.  Unlike the Fool whose powers are truly imbued within him, the Anti-Fool derives his powers from his scepter. So taking it away will turn him into a normal evil human.  If he is unable to recover the scepter within one minute then his face will permanently be molded into the image of his skull mask.

An Anti-Fool has 13 years to let loose his reign of terror before he must pass his scepter along to another person he judges as dark of heart.

Generally sadistic bullies with a despicable sense of humor are chosen for the task.  If the Anti-Fool fails to give up his scepter in the 13th year then he will die instantly in the first second of the 14th year.  Once he abdicates his position he won’t have any hint of his powers left and will probably die of cancer at an early age due to dark metaphysical radiation overexposure.  The previous Anti-Fool will not tell him in advance, and he himself only finds out once he’s stuck with his title.  Once you become an Anti-Fool you must serve 13 years or die a slow agonizing death over the rest of the time remaining in his reign.  The skull mask will not come off until then and the scepter will magically appear in his hand unless it’s being mystically withheld from him.  If someone isn’t truly dedicated to spreading bad luck, evil, harassment, horror, and malicious dangerous pranking then it could be like being damned to hell for 13 years!

Unlike the April Fool whose rarely spotted and performs millions of pranks on April Fool’s Day, the Anti-Fool spends more time on his dastardly

plans which involve a smaller amount of victims.  He’s more likely to be seen since he’ll spend more time in one location targeting victims for his special brand of terror. His presence is known by his sickening maniacal cackling.  Something prevents him from going after the pure of heart. Kids in particular.  Everyone else is fair game including those who are at the bottom of the pyramid of Earthly, evil such as common thugs or bullies, who mistakenly think they’re untouchable as they have no clue the paranormal world is real.  If you spot him, hear his unmistakable snide snickering, or feel a presence in your life is negatively affecting you on April 2nd then please don’t hesitate to contact us here at Mystic Investigations for immediate assistance!  If you actually meet him face to face and cannot escape please remember that his scepter is his weakness.  Get it from him at all costs and smash the skull at the top under your foot.  Once this happens he will scream in pain as his face is molded into the image of his skull mask.  He’ll then proceed to vanish until next years Anti-April Fool’s Day.  The scepter will magically reassemble and be returned to him.  Fear not however.  Under supernatural law he can not go nowhere near you, your family, or friends.  Nor can any future Anti-Fool for all eternity.  You were smart enough to defeat him, and that victory stands supreme!

In contrast to The April Fool who is powered by the Norse Trickster God Loki, we have no clue where the Anti-Fool came from.  Like all forces

of light or darkness it seems an opposing entity always eventually shows up to balance things out.  Various psychics, seers, and mystics have felt demonic vibes from him, and clearly magic is involved since he needs the supernatural scepter.  Certainly there has been limited success with repelling him with extra powerful religious artifacts such as holy water, crosses, religious texts, etc. However we wouldn’t recommend relying on that with this particular paranormal menace.  The Anti-April Fool could indeed be a creation of a powerful dark demon worshiping Sorcerer, Wizard, Warlock, or Witch!  Demonic possession of the Anti-Fool could be a factor as well.  Either way you need to avoid this filthy fiend at all costs!

Related Articles Across The Web