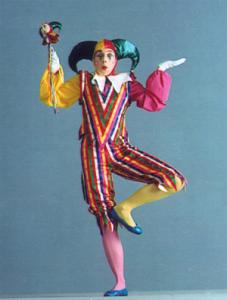 April Fool’s Day (April 1) isn’t just a time of pranks, and humor confined to human instigators.  There are magical forces at work instigating supernatural shenanigans. The April Fool is a magical supernatural being who appears to be a jokey jester that performs various pranks and hopefully harmless mischief upon unwitting humans on April Fools Day.  The Foolish Fool is formerly a human who loves jokes, pranks, and general fun loving mischief of merriment.  A previous April Fool picks a worthy person to take his place when his 7 years of service are complete.  He then returns to being human although he retains some of his powers to a limited extent along with living an exceptionally healthy life well into the mid-100’s.

The April Fool seems to appear simultaneously in places all around the wacky world which led those of us in the paranormal community to believe there were a multitude of them.  In reality there is only one prankster but time stands still for him on April Fools Day.  In fact the day is the equivalent of 365 days for him.   When April Fools Day is over he is thrust ahead to the next years April Fool’s Day thereby skipping all the other 364 days left in the year.  So you see a silly Fool really needs to be dedicated and in love with his craft of tomfoolery to do it for seven years straight.  He has various magical powers which include enhanced superhuman abilities, invincibility, the power to alter reality within a limited parameter, powers of luck, and some mind control powers.  He is virtually invincible and unstoppable as he spreads his hilarious hijinks about the pranking planet.  Expect embarrassment, insults, and even vandalism which incidentally will disappear the next day.

You have nothing to fear from him but prepare to be royally pranked on April Fools Day.  He chooses people both good, and evil to spew forth his crazy antics upon.  Depending on how they handle it they will either have good or bad luck for the entire month of April.  If you are a good sport you’ll get good luck but if you get angry you’ll have bad luck.  If you’re easily embarrassed then try very hard to grin, and bear it.  If your deeply offended by things then tough luck because the Fool could care less about political correctness.  You will generally hear a hilarious giggle just before, and after he performs a giant joke.  If you want no part of the April Fools game then there is a small measure you can take.  The only known repellent for the April Fool is the Harlequin flower, aka Sparaxis tricolor.  Although there has been some success with the Sparaxis grandiflora variety.  Plant the flowers around your home, display inside, and wear on your clothes.  A perfume or cologne made of the Harlequin flower, or an essential oil of Harlequin may also act as a deterrent.  Crushing the flowers, and mixing them with holy water may be a possible weapon against the fool if you’re a big enough party pooper.

It’s unlikely you will spot him due to his powers of time, reality shifting, invisibility, and super speed.  All of which he may have originally received from the Norse Trickster God Loki.  We think that Loki may be behind the creation of the April Fool, and April Fool’s Day.  However there’s no concrete evidence of this yet.  If by some miracle you spot the April Fool then wave at him, and respond to his loony laughter with a gleeful giggle of your own.  Happy April Fool’s Day To All!