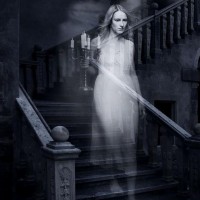 November 2nd All Souls Day, aka the true paranormal Day Of the Dead, will see a great deal of ghostly activity! A variety of non-demonic non-corporeal entities soak up the titanic Angelic energies left over from November 1st’s Hallowmas All Saints Day. Luckily most demonic based activity will be repelled. However ghastly ghosts, and grave rising zombies could result!  All Souls Day is one of the most prolific times for ghosts to materialize in various forms along with people communicating with them by a variety of means that include Ouija Boards. In fact this is one of the few days of the year, along with Christmas, where you can safely use an Ouija Board without worry of calling up some demon or sinister spirit.  Often times such entities pose as dead humans for their own despicable purposes!

Some ghosts are able to materialize in powerful solid light forms, aka photons forming densely packed molecular matter. Others can inhabit their corpses coming back to life as sapient zombies. Those who were cremated with their ashes still in one place may reform amid a blinding whirlwind to self-resurrect as a gray ashen being that somewhat resembles a sickly human. Standard mindless zombies can form when weaker ghosts attempt to enter their bodies, professional practitioners of magic intervention, and even misguided family members dabbling in magics they have no comprehension of. A select few may manage a complete self-resurrection thereby becoming permanent immortal humans. In some cases ghosts, and other non-demonic spirits may possess weak willed people. Thankfully the possession can only last until the end of The Day Of The Dead. Naturally all the above cases will happen in relatively small quantities in comparison to the entire global populace. Luckily the majority of any dangerous activity will cease at Midnight on November 3rd as the last of the enchanted Angelic energies fade gracefully from the Earth or are absorbed The Spirit Of Christmas.