Posted on October 30, 2014 by Paranormal Forecaster 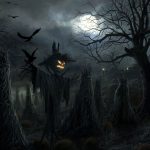 Halloween is generally the most turbulent time of year in the world of the supernatural as the forces of evil are at the apex of their power.  Dark energy flows forth among the rustling leaves, and fluttering candlelight of the Jack-O-Lanterns.  Yet amid the foreboding darkness the joyful laughter, and silly screams of children trick o treating signals the marshaling of their innocent magic by the forces of good.  This years Halloween forecast is slated to be above average in paranormal activity due to the October 8th Double Blood Moon Tetrad Eclipse.  However it’s proximity from All Hallows Eve has lessened it’s impact.  In fact Halloween should be less dangerous than the night of the October 8th blood Moon.  In addition Shala, Queen Of Halloween, has been working extra hard to make this Halloween as safe as possible for children trick o treating.

The most prolific paranormal phenomenon happens during The First Darkness Of Halloween.  That being the Witching Hour & Devil’s Hour with the time in between coming in a close third.  So Midnight to 4 AM would be a great time to be safely in bed surrounded by religious artifacts, silver, crystals, herbs, and anything else in your anti-paranormal arsenal.  The Second Darkness Of Halloween begins at dusk on October 31st amid trick or treating.  The time when trick of treaters are out in full force is the safest time since the kids magical energies of innocence are being channeled by good practitioners of magic around the world.  With that channeling comes a reverse connection of protection from those practitioners of white magic.  Despite this you should never let your guard down against the creatures of darkness that lurk in the shadows just outside the well lit lawns laden with Halloween decor.  The very decor that repels the forces of evil since the Spirit Of Halloween is channeling through that location.  Just another layer of protection to have along with your usual supernatural countermeasures.

all arenas including ghost, poltergeist, demon, vampire, zombie, and even werewolves despite no full Moon.  Halloween has the power to transform Werewolves without the mystical lunar energies which is the most dangerous feature of All Hallows Eve.  Of course don’t let this take away from the Gnome threat since they’re known to eat children in order to extend their lives to immortality.  Those things you see darting in, and out of the brush from the corner of your eye aren’t rabbits, or squirrels!  They’re deadly little Gnomes!  Always accompany your kids as they collect candy door to door.  If they’re older than make sure they in a group together.  Never trick o treat alone unless you’re a paranormal professional, or have special powers. Beware of not only the metaphysical threats but also the threat of nefarious humans whose dark hearts compel them to commit heinous acts.

Thankfully all the potential madness ends at precisely Midnight on November 1st which is Hallowmas, or All Saints Day.  At that exact hour Angels descend from Heaven to clean up various paranormal messes that might alter human history to a certain degree along with correcting any violations of the Supernatural Secrecy Pact.  Once the Angels are among us you should feel very calm, peaceful, and secure as every entity of evil slinks away into every dark crevice on Earth, and beyond!