Mystic Investigations Takes On The Demonic Specter Of Friday The Thirteenth! 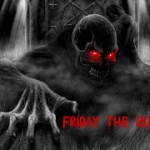 As you may have read in our Paranormal Activity Forecast, we warned of the infamous Friday The 13th Demon Specter and his unwelcome nocturnal visits to 13 unlucky victims around the world.  This special Demon feeds off paraskevidekatriaphobia (fear of Friday The 13th), the number 13 in general, and a variety of other frights & anxieties. On Friday The 13th at the Midnight Witching Hour he rises up from the bowels of hell as a sinister black billowy smoke specter with a humanoid skull shaped head, and menacing crimson eyes that flicker forth a foreboding unholy light.  He then ascends upon a person sleeping in bed, and feeds upon their fears.  Although the victim isn’t left physically hurt, they in fact are left mentally weak along with being cursed into 13 years of bad luck.  Luckily due to varying factors, including the innocent magic all kids posses, the specter cannot prey upon children.

Last night we had all returned from Para-Con in Cairo, Egypt, and went to bed early due to jet lag.  Then at about 11:44 PM our Psychic Julia Hathaway had a vivid dream vision that caused her to thrust from a sound sleep dripping with cold sweat.  Psychics have rarely gotten any warnings of the sinister specters evil presence but most likely she got one because he was going to prey on a victim in our fair community of Woodland Springs, Colorado.  Julia had little time to act before the Witching Hour approached, and she only had a vision of the female victims bedroom which included a brief glimpse out the window.  She quickly got dressed, and ran out into the cold February night knowing the unfortunate victim was near.  She ran down the dark sidewalks looking for a particular street lamp, and tree while hoping to pick up a vibe of impending evil.  While on her lone quest she called Drake Alexander, our resident vampire, on her cell phone to apprise him of the impending sinister situation.  Drake in turn called me, and I got the Mystic Investigations Team together.  We all sprung into action to find Julia while Drake was nearly halfway to her as he ran at super speed across town!

Meanwhile a young college student named Autumn Parker had just fallen asleep on an off campus sorority house near the Comanche County College.  The house was dark, and silent as a dozen college girls slept silently with two in each room. Autumn slept alone since her roommate was out partying.  She was a troubled girl with an unpleasant childhood, various anxieties about life, and her future, along with a deep fear of Friday The 13th. As a small child it was Friday The 13th when she witnessed the horror of her father’s blood being drained by what she believed to be a female vampire.  Although based on what she saw we believe it was actually a Demi-Demon.  Especially considering the giant chunk of flesh ripped from his neck, and shoulder!  No doubt the human-demon hybrid would have devoured her fathers entire body if not for the interruption by the innocent child.  The woman halted her attack, and kissed Autumn on the lips before whizzing away at super velocity crashing right through a window.  Naturally the authorities blamed the attack on a rabid wolf, and labeled Autumn as having mental issues.  It’s rare for a human to have even one blatant brush with the supernatural but now the unlucky girl was about to enter the world of the paranormal for a second time big time!

The grandfather clock in the sorority house common area began to chime as the witching hour was at hand.  From the wood floor of Autumn’s room a black fog rose from the cracks in the wood boards.  It was accompanied by a sickening sulfurous stink! It slithered along the floor fluidly over a small shaggy rug until it took the sinister shape of the demonic specter of Friday The 13th! A maniacal smile formed on it’s smoky skull face as the eyes shimmered ablaze with the very glow of Hell itself.  He floated up the side of the bed hissing, and was levitating over the serenely slumbered Autumn.  His face aligned with hers as his large rounded eyes lit her face with his terrifying trademark crimson glow in the dark room.  The black wisps of smoke composing his body began to encapsulate her.  Autumn was having a dream about flunking out of college as Friday The 13th appeared on calendars everywhere.  Suddenly the somewhat stressful dream turned into a full blown nightmare as the demonic entity appeared before her with dark skies, and lightening firing about amid insanely loud thunder strikes.  She ran screaming from him in the most vividly hellish nightmare she ever experienced!  He laughed maniacally, and chased after her with despicable glee!

At that moment Julia ran into the room.  She had unlocked the front door of the sorority house with her telekinetic powers. She cautiously made her way up the creaky steps, and slowly opened the door to Autumns room. The creature cocked his head right at Julia lighting her with his bloody red light.  He attempted to enter her mind but she skillfully blocked him with her psychic powers, and then used her telekinesis to disrupt his foggy body.  He hissed loudly, and said,”Die bitch!”  Despite the Specter supposedly being bound by some force to prevent him from causing direct physical harm to humans there was never a report of the beast being challenged by someone with powers, or another supernatural being.  Apparently it was open season at that point because he blasted across the room, and whirled around Julia like a mini tornado lifting her off the floor, and dizzying the hell out of her as she gasp for breath amid inhaling his deadly black vapors!  Her eyes were forced shut by the sinister soot.  She began to loose consciousness while the bedroom door slammed shut, and everything in the room flew about wildly!  The demons crass cackling echoed throughout the room, and the entire house.

The other girls in the house awakened to the racket and were pounding at Autumn’s door yelling for her to open it up. Suddenly Drake appeared behind them, and said,”Allow me ladies!”  They were startled at first by the unknown man in their house in the dead of night but his handsome appearance, vampire aura, and hypnotic gaze lulled them into sensual submission.  He attempted to kick the door in but it was demonically sealed, and the wood metaphysically reinforced.  He then ordered everyone to get back as he went to the far end of the hallway, and then raced toward the door a super speed splitting it into 10,000 splinters. His vampire vision saw Julia in the center of the demons dust devil.  He sped into it, and grabbed Julia as he crashed out the second floor window with her in his arms.  He placed her on the lawn, and found she wasn’t breathing.  Drake bit into his wrist, and fed her his healing supernatural blood.  Within seconds she was coughing, and breathing again.  Drake looked up at the window to see the demons glowing eyes looking down upon him in anger.  He bellowed,”Silly little vampire boy how dare you interrupt my sacred ritual!”  He immediately sped down in a long snake like line of dark fog, and hit Drake so hard that he flew into the street right through the pavement into the stinking sewer below. Clearly the specter could change his gas like form to a solid at any time.

Drake sprung forth from the sewer attempting to get his hands around the demons neck but he merely changed himself back to pure smoke.  The evil entity laughed maniacally with glee as he evaded Drake’s capture, and simultaneously shot unholy fog into his body.  Since vampires don’t breath he didn’t choke but he could feel his immortal energy being sapped away with each smoke ridden intrusion into him.  Drake finally collapsed on the front lawn as the sorority sisters looked down from the second floor in sheer terror. All the while Autumn was still trapped in her demonic induced nightmare unable to awaken.

body as it came back out with a sanguine glow.  He was draining away all of Drake’s blood energy. The very supernatural energy that powers vampires demonic DNA.  The specter muttered,”You fool!  Did you really think a vampire would be a match for a demon?”  Drake was no longer conscious as he began producing his own unholy smoke.  Smoke that indicated he would soon spontaneously combust into unholy flames that would mark the end of his 700+ years of existence on Earth!  Julia was still too weak to do anything but watch helplessly with her blurred vision while lying on the lawn nearby under the dim light of the street lamp.  The sorority girls had attempted to dial 911 but all landlines, and cell phones were mysteriously dead.  Most likely a combination of the Specters metaphysical dampening field, and the production of electromagnetic energy by two supernatural beings battling it out!

To Be Continued….Did The Friday The 13th Specter Win? Find Out In Part 2!