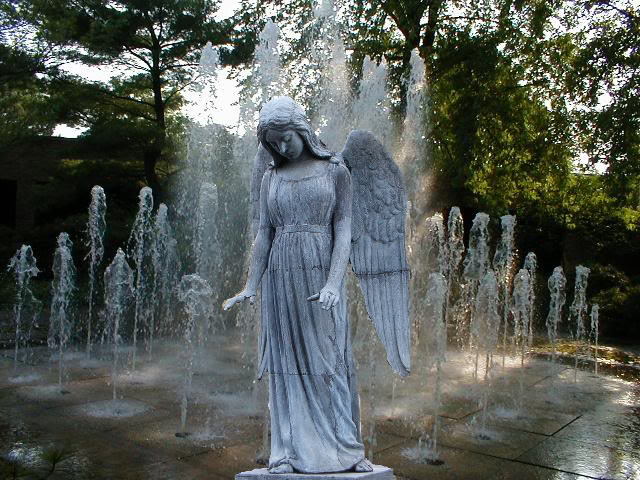 The Woodland Springs Cemetery is located on the grounds of Father Tom Davis’s Church Of Holy Light and is run by Woodland Springs Funeral & Mortuary.  The Stone Angel Of The Light pictured above sits amid the graves of the fallen dead looking over them for eternity as fountains of real holy water splash around her. Inexplicably local legend states that the statue was already there when the first settlers came to Woodland Springs, Colorado.  Native Americans have their own legend that the statue was a real Angel who visited their ancient ancestors to expose an epidemic of demons posing as nature deities.  Evidence indicates this Heavenly visitation predated Christianity, and the Angel was considered a God!  The Angel did attempt to explain the concept of Heaven, and monotheism but that didn’t change their minds.The Angel was ambushed by several demons who transmuted it into stone after siphoning away it’s life force.  It’s unknown if the Angel was actually extinguished or ascended back to Heaven. Either way it’s considered the most holy place in our town, and the safest place to be if a vampire or werewolf is hot on your trail!