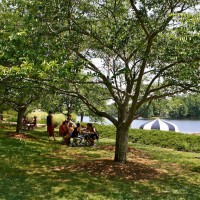 A lot of our paranormal investigative staff went on vacation early last week to enjoy the last bit of Summer through Labor Day. Those of us still in town showed up at our annual company Labor Day picnic at Luminary Lake. We spent most of the warm day on the beach basking in the sun along with swimming. There were also some prize winning games that included those on staff who have kids. As sunset approached we lit a beach campfire to tell real ghost stories on the edge of the most haunted forest we know of. The Mystical Forest! We only had two supernatural incidents that included a sighting of the infamous Luminary Lake Monster who caused a scare in some speed boaters when it bumped their boat. However they were being annoying anyway so kudos to the Monster! 🙂

There was another paranormal incident hours later when some kids ran screaming down the beach toward us. A line of moving raised sand was following them rather rapidly. It turned out to be a creature called a Sand Snark. It’s a small sharp toothed beast that swims through sand looking for meaty prey of any sort. Normally they are found in large deserts so it’s odd one would be on a beach next to a lake in our forested mountainous region of Woodland Springs, Colorado. Most likely some nefarious figure or prankster buried a Sand Snark Egg on the beach recently because it was an infant yet still very dangerous! We were going to take the little monstrosity out with extreme prejudice since it was threatening children but our Cryptozoologist Dr. Ashley Abercrombie stopped us as she was eager to study this rare paranormal entity. Our resident witch Rebecca Abernathy trapped it in a Reverse Mystic Sphere. Her Active Witch power is to create a bubble of protective metaphysical energy around herself at will. In recent years she’s been training to make it appear next to her, and direct it as a caging tool. She caught the Snark in the supernatural sphere, and Ashley pulled out her trusty syringe of Chupacabra tranquilizer to subdue it. We caged it in a metal crate of sand in the Mystic Van, and went back to the picnic party.

Later as we were around the campfire amid the darkness we could see the trademark azure neon glow from Luminary Lake caused by mystical microorganisms.  Generally this is most concentrated on the waters edge.  If you dive deep enough there’s also a related paranormal organism that produces an eerie green glow along the bottom of the lake.  We saw a faint outline of the Luminary Lake Monster leap out of the water letting out an almost cow like “Moooooooooo”.  It was a magical evening under the stars as we put out the camp fire, and left for our respective homes.  Happy Labor Day From Mystic Investigations!