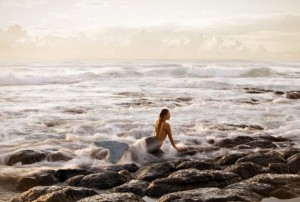 Due to various Cyclones in the South Indian Ocean over the past weeks, expect to see beached Mermaids wash up on shore waiting out the storms.  These savage sea storms include Tropical Cyclone Funso & Tropical Cyclone Iggy, and can catch Mermaids off guard.  A Mermaid might be at the surface, near shore, or even on shore when a violent Cyclone flies into the vicinity with a violent vengeance by the power of Poseidon himself.  Hellish waves will over power a Mermaid sending her or a Merman he to the ocean shores.

Once washed ashore they are quite vulnerable, and will not grow legs unless under the light of a full moon.  If you live along the Indian Ocean in Africa, Australia, India, or other sea shores in that region please take care not to agitate the gentle aquatic wonders, and do not stare at their bare chests for they feel embarrassed exposed in front of humans.  Luckily their long locks usually cover them up.  We recommend not trying to catch one because they will vigorously defend themselves by swinging their tail at you.  If it hits you it will thrust at least a ton of force against you.  Most likely you would die.  Even their arms posses super human strength.  So if you must just take a few photos, or a brief video clip.  Say hello, and then leave them in peace until the storm is over so they can return to the deep depths of their undersea home.

The Mermaids in the Indian Ocean are not from Atlantic, which resides in the Atlantic, but rather Mystic Seas which lies deep beneath the Indian Ocean.  Most of these Mermaids were originally explorers from Atlantis who wished to start their own civilization in an under sea area that was naturally teaming with paranormal life.  They also did not hold allegiance to the powerful sea God Poseidon which is the main deity of Atlantis.  The Mystic Seas Mermaids instead worship the Hindu sea God Varuna.  This angers Poseidon which is why he causes so many storms in the Indian Ocean.  It’s his vengeance against Varuna, and the Mermaids who follow his path of enlightenment.  However Varuna causes his share of storms, and Hurricanes in the Atlantic Ocean as pay back for Poseidon’s attacking his children of the sea.  Despite most of humankind giving up on these sea Gods they are still quite powerful, and active thanks to the many Mermaids who believe in them.