Posted on August 7, 2014 by Paranormal Forecaster 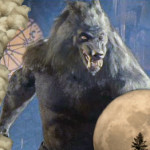 The most common name in the paranormal community for the full Moon of August is the Corn Moon.  The long form name is the Green Corn Moon. However the August Moon is also known as the Sturgeon Moon, Grain Moon, Dog Day’s Moon, and Fruit Moon in other cultures.  The Corn Moon doesn’t cause increased risk to humans by the hairy sharp paws, and jaws of Werewolves.  The only odd effect of the Moon is that Werewolves become mesmerized by fields of Maize.

If a corn field is nearby they will be compelled to run through it madly forming instinctual demonic patterns that often appear as so called Crop Circles. Some say it’s a message straight from Hell utilizing Werewolves as the unwitting messengers since their DNA is demonic in nature.  Certain high level practitioners of dark magic along with upper echelon unholy priests, claim it’s instructions from the Devil, and now perhaps also from Dimitri Diablo the current King Of Hell.  These diabolical instructions are thought to be marching orders for the coming hellish Halloween season which is the most heightened time for the forces of evil on Earth.

That being said unfortunately this isn’t just a Green Corn Moon but also the most prolific Supermoon of the year.  This is the Supermoon in which the Full Moon will be closest to the Earth on August 10th.  Supermoons result in highly adversarial, and hulked out Werewolves.  In other words Super Werewolves!  No thankfully they can’t fly! These monstrous beasts will no longer be easily repelled by religious artifacts, silver, and Wolfsbane.  You will need larger quantities, and concentrations than usual.  On the night of the 100% full Supermoon it would probably be best to just stay at home since it’s a Sunday anyway.  Most likely you were bored at church earlier in the day, and are ready to hit the hay until Monday morning.

For those of you who are aware you’re a Werewolf please reinforce your cages, and shackles!  You will have double or even triple your normal strength at the apex of the Full Supermoon!  Thank you for being responsible, and protecting humanity from your Lycanthropic condition.

Note: Younger werewolves can transform even under Moons 80% of full while older werewolves gain resistance, and need a 100% full Moon.

I'm the President of Mystic Investigations. A private paranormal crime fighting organization out for supernatural justice in a world full of supernatural darkness.
View all posts by Paranormal Forecaster →
This entry was posted in Corn Moon, Full Moon, Super Moon, Werewolves. Bookmark the permalink.