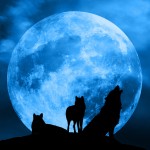 Tonight will bring us the rare Blue Moon which is an extra full Moon in any given month or season.  In some areas the Blue Moon might actually appear blue in color due to atmospheric conditions, forces of supernatural nature, or magical interference.  This rare Moon brings us a general increase in paranormal activity across the board including various practitioners of magic utilizing the Moon in their nefarious spells.  A Blue Moon causes Werewolves to hulk out to nearly twice to thrice their normal size.  As a result their strength, speed, and agility are greatly increased.  In addition their aggression will be off the charts as they enter into an even more rabid rage filled rampage ready to rip through anything in their unfortunate path of terror.  Normal Werewolf repellent, and defense methods will be less effective so we highly recommend staying indoors after dark until dawn.  In areas where the Moon is actually blue in hue you can expect even more carnage, and chaos.

Vampires will also be effected in the blue zones because theirs the potential for them to temporarily revert to a human like state within this Moons light.  It should theoretically only effect them if they actually bask in the blue rays so we recommend vampires stay indoors as well.  Naturally vampire slayers are converging on these forecasted blue zones to take advantage of the vampires vulnerability.  On a positive note their blood lust will disappear, and they may have uncontrollable urges to eat food.  If you see well toned people stuffing in food like crazy at restaurants, or supermarkets then there’s a good chance they’re a vampire.

Mermaid activity on beaches will increase greatly in areas where the Moon is actually blue in color because legend has it that they can become a super human whose free of the seas power over them.  They will have the power to transform into a mermaid at will for the rest of their immortal lives regardless of whether they’re in sea water or not.

The Blue Moon brings us 13 Moons instead of the normal 12 a year.  The specter of bad luck will mix with the holy Yule Moon. Thankfully, it shouldn’t be enough to make a difference with the Moon being so close to Christmas and New Years. Naturally this depends on our global condition after the December 21st, 2012 winter solstice of doom prophesied by some in the paranormal community.