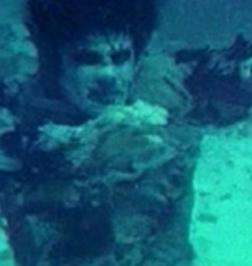 The natural bad luck that materializes on Friday The 13th usually results in a high level of ghost, and poltergeist activity.  However on this particular 13th day of April were seeing an unprecedented amount of lake zombie activity.  Lake Zombies are a rare form of zombie that are the result of the unrecovered bodies of drowning victims.  For reasons unknown these victims rotting corpses are reanimating, and surfacing.  The greatest number are being seen in the Great Lakes due to the ease of a body not being found in their vast murky waters.  However these zombies can rise from any body of water except salt lakes, and oceans since salt inhibits the rise of zombies.  This does not mean it’s impossible for the living dead to rise from the seas under more powerful pulls of magical forces.  In addition the risk of rising from rivers is minimal since the bodies are usually washed into lakes, or seas.

We’ve received many sightings of the animated corpses various lakes around the world including Victoria, Tanganyika, Baikal, Great bear Lake, Wular, and many more! No non-saline lake, or other body of water is safe.  We suggest steering clear of these bodies of water until Midnight April 14th.  Not only to avoid these dangerous creatures but also to prevent spreading the supernatural zombie virus.  The zombies flesh will rot into the water as the living dead thrash around violently trying to claw to the surface, and eating any fish along the way.  If you see blood red water, and fish corpses floating about it’s a fair bet that a lake zombie is nearby.  Flee the area at all costs, and call your local zombie hunters, or paranormal investigations firm for help.  If you should be have no choice but to deal with a zombie then any sharp implement can be used to hack off their head.  This is always the best way to deal with the scourge of the supernatural.

We also received an amazing report of a zombie making his way out to the ocean nearby, and a group of ocean crypto-photographers caught the awesome rare sight of a zombie taking on a great white shark.  Despite zombie flesh rotting off easily, and their relatively slow speed they do possess super strength when infected with the paranormal form of the zombie virus.  The shark was immediately attracted to the decaying living dead corpse. The great beast swooped in for the kill, and ripped the zombies arm off.  Unfortunately for the shark the zombie latched on with his other arm while sinking his razor sharp teeth into the shark.  Within minutes of struggling the shark was dead but the zombie was nothing but a torso with a partially detached head.  The shark however reanimated as it was infected.  The zombie shark promptly took out the crypto-photographers with extreme prejudice.  Luckily the camera was recovered hours later by their buddies in a boat above.  This shark is still on the loose.  However the odds of anyone running into it are astronomically low.  The shark will be too busy going after the abundant sea life to smell any people even if they happen to be nearby.

Luckily the increase in zombies seems to have resulted in less instances of bad luck which is common on Friday the 13th’s.  Still we recommend carrying lucky charms with you.  Those blessed by a Leprechaun are the best because the little Irish guys are the masters of good luck.  Beware of your surroundings on this perilous day, and pray a zombie doesn’t bite you.  Otherwise you’re done for!

I'm the President of Mystic Investigations. A private paranormal crime fighting organization out for supernatural justice in a world full of supernatural darkness.
View all posts by Xavier Remington →
This entry was posted in Friday The 13th, Zombies. Bookmark the permalink.