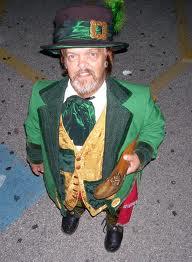 There have been a number of Leprechaun sightings on this St.Patrick’s Day 2012.  Be on the look out for the little 3 foot tall fellows wearing green, and giggling in an Irish accent as they scurry about with their sacred Shillelagh in hand.  At the request of the Leprechauns patron Saint Patrick, the Heavenly Angel, an Irishman who died on March 17th, 461 AD, the little lucky Irish gentlemen travel about the Earth spreading good luck to humankind.  Naturally they can travel super fast via their rainbow networks whether we actually see a rainbow or not.  They spread luck in various ways including approaching people targeted by Clurichauns, aka Anti-Leprechauns, creating magical wishing wells, and fountains, and various other tricks of the Irish good luck trade.  This yearly marshaling of good luck is meant to bolster the forces of good, and counter the evil minions that imbue the vile darkness of bad luck within humankind.  The chief minions of bad luck being the previously mentioned diabolical, and devious Clurichauns who were the subject of an earlier Paranormal Activity Warning.  The explosive merriment of good luck ushers in the magic of the Spring Equinox, and supports the Easter Bunny in his coming cause of spreading the forces of goodness, and light upon the world.

Leprechauns are no threat to humans unless you provoke them.  They can become especially ornery if you steal their glorious gold or their precious lucky charms.  Naturally we’re not talking about the cereal here.   We understand the temptation to steal their gold or even capture them because either one entitles you to three wishes.  They are bound by supernatural law to do so, and despite being angry won’t harm you.  You could take the pot of gold, and cash it in for somewhere on the order of $1,659,000 based on the current March 2012 price of gold per ounce with 1000 gold one ounce coins in each lucky pot.  Although that would be chump change compared to the three wishes.  Not to mention the fact that you will be taking the source of power away from the poor little guy.  These lucky wishes are good luck based, and not everything is possible such as in the case of Genie wishes.  Your Leprechaun will inform you of what is possible, and is bound again by supernatural law to be truthful.  Your wishes also won’t be instant as you need to take action to make them happen.  Say you want one billion dollars.  You then need to go win the lottery, gamble, play the stock market, or do anything to try, and make money.  If want to marry a hot super model then you need to go find the one you want, and they shall be smitten with you.  The Leprechaun merely imbues you with the good luck, and you do the rest.

If you manage to only steal his lucky charms, including his sacred bag of shamrocks, you’re only taking away his Clurichaun protection, and endangering the lucky Irish Lilliputian.  He will try to negotiate the return of his charms but he is not bound to give you wishes.  However the lucky charms will bring you some level of luck.  On the other hand the Leprechaun will hound you forever, and may get his friends to join in.  Eventually bad luck will find you so we suggest not holding on to the lucky charms for too long as the luck degrades when out of Leprechaun custody too long.

You can find Leprechauns in fields of clover, Shamrock in particular, where they feast upon the lucky green goodness.  Growing Shamrock, non-GMO, around your home is great way to lure Leprechauns to your property, and bring you good luck as well even if you never spot the little lucky charmer.  It also repels the evil bad luck Clurichauns who you want to avoid at all costs.  Also be aware that Clurichauns can pose as Leprechauns to trick you into bad luck deals that can plague you for the rest of your life!

By the grace of the holy Angel Saint Patrick, and his little Leprechaun workers we wish you all a safe, and supernaturally lucky Saint Patrick’s Day!