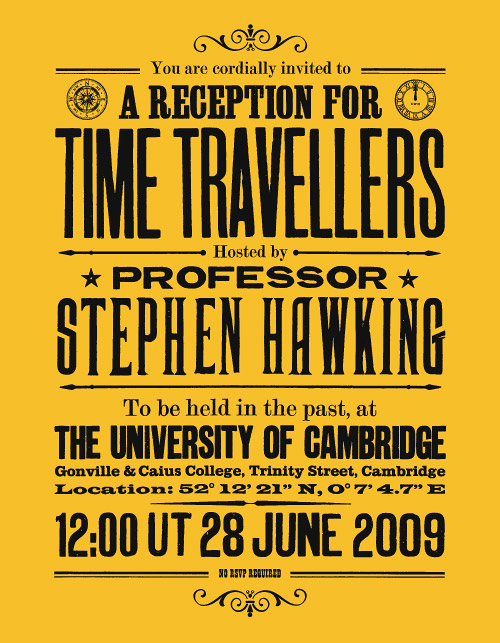 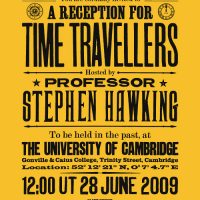 So it seems famed Physicist Stephen Hawking held a lavish party for Time Travelers. However the catch was that he wouldn’t send out the invitations until after the party was over. The presumption was that only a time traveler could show up to what was in essence a secret party. There was an assumption that word would get to the future, and at least some of the invitations would survive for hundreds of years. Hawking awaited the appointed Midnight hour alone at his perplexing party hoping for a temporal visitor to stroll merrily onto the premises. Unfortunately nobody showed up. Or plausibly he wasn’t allowed to say if someone from the future arrived?

Future human governments have rules regarding time travel along with various enforcement authorities. So naturally any travelers who showed up would not want word to get out to said authorities. Particularly any unauthorized tampering with the past! If nobody really showed up then Stephen should have added he would keep it a secret from the beginning. He would announce the party but promise to never reveal if anyone attended. Then he would have surely got at least one who would want to meet one of humanity’s most famous scientists. Of course this would probably be unnecessary considering there is a point  in time where historians begin to use time travel to bring historical figures into the future at the time of their death. Once in the future they are brought back to life, cured of all ailments, and granted immortality through technology. Generally a time traveler visits them first in order to get permission to intercept their Afterlife path.

At the end of the day anyone with a certain level of fame will more than likely end up as an Immortal in the future. Especially if they could be classified as a historical figure. For the rest of you who have no belief in a supernatural afterlife rest assured future humankind will save you! There are many parallel afterlives. One includes future human civilization ascending to higher dimensional Godhood, and setting up their own Heaven through mind boggling technologies. They will utilize temporal devices, beyond anything you could call a machine, to target every human who ever lived. They will then pull forth the essence of their consciousness to their wonderous world! Even atheists can have an afterlife if they believe in the awesome imagination, and ingenuity of the human mind! There simply can never be a limit to non-corporeal energy, aka consciousness, even if it does appear to be contained in our biological brains.