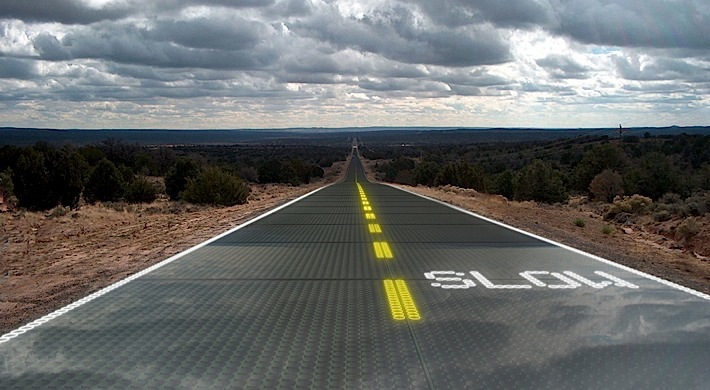 Free electricity, and totally awesome LED lit roadways are the future! These cool streets would be strong solar panels powering our electrical grid by the power of the never ending Sun. Excess energy not used during the day is stored in batteries for night usage. These damage resistant roads would last a lot longer than concrete, and asphalt, thereby ending the never ending nightmare of long term road construction. If a panel is damaged it would only have to be removed, and replaced with a new one. Traffic lines, and directions would be dynamically displayed in the streets. Easily reconfigured by computer. Same goes for parking lots, sidewalks, driveways, and sporting courts at parks. Such courts could be changed by users for any sport they’d like.

These pressure sensitive roadways would also detect people, animals, and obstructions that might not be seen in the dark. Flashing warning lights in the road would certainly alert the driver in time to slow down, and watch out for danger. Drunk drivers or those suffering sudden health issues, who might be swerving on the street would get flashing, and guiding lights to either compel them to stop, or keep them going safely until the authorities arrive. With the electric car becoming the inevitable roadway standard, there would always be somewhere to re-charge vehicles. Even in the middle of rural areas. Heating elements would keep all surfaces warm in the winter thereby eliminating the need for plows, salt, sand, and shoveling. If the power from this immense solar energy still wasn’t enough to power our society then most roofs of homes, and businesses, could be covered in solar panels as well.

The technology, and costs involved are not yet in true existence to the point where this can be completely feasible. In addition greedy energy interests will fight to suppress this technology. A common method is to buy out patents, and then mothball it! If that doesn’t work then there’s the miracle of politicians being bought off by corporate campaign donations, and lobbyist insider trading information. The plutocratic, and corporate powers that be will always fight against the betterment of humankind in favor of their selfish building of excessive wealth! Thankfully these futuristic animated avenues will begin to spring up across the USA, and the world in the mid to late 21st century. By the mid 22nd century most roads, sidewalks, and driveways will be high tech smart surfaces! Of course by then flying cars will be in full swing as well!