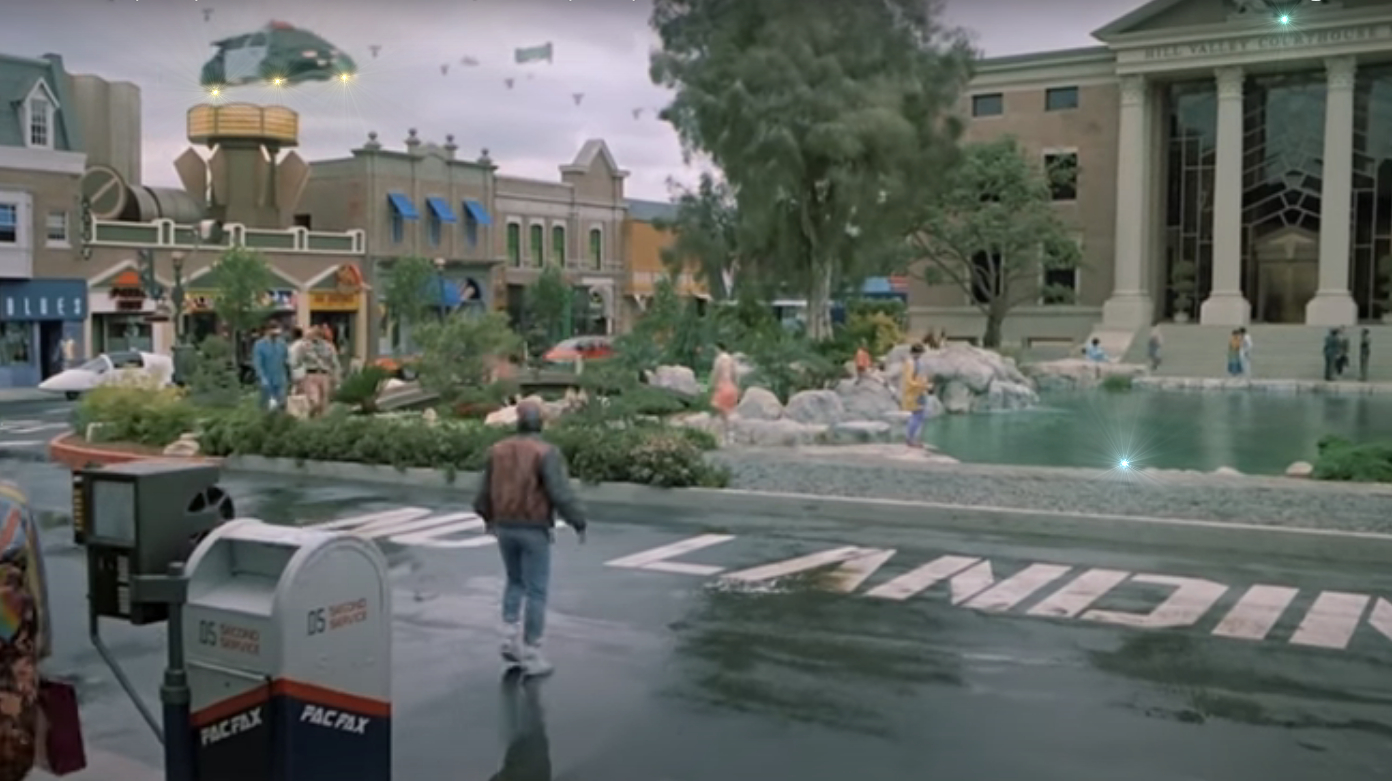 The fantastical future of 2015 portrayed in the 1989 motion picture Back To The Future Part II is actually a lot more like 2115.  My brother Michael Remington, currently missing in time, took me to 2115 some time ago after he’d previously visited there.  He said it reminded him of the future seen in Part 2 since the Back To The Future Trilogy[Ad] are his favorite films.  Michael’s method of time travel is a small device that teleports his body to the future by re-calibrating vibrational frequencies at the sub-atomic level.  Frequencies that change with each Planck Unit of time, aka 3-D frozen bubble Universe, or perpendicular temporal dimension, we travel through constantly on everyone’s natural 4-D travel into the future.  Altering y0ur frequency to match a certain time sends you there. Although it’s very hard to calculate!  However, once you’ve been to a particular time Michael’s time travel device saves the frequency for future ease of travel to said destination.

We arrived in our current location of Woodland Springs, Colorado in 2115 to find many things similar to Back To The Future Part II along with things that never happened.  Clearly, there’s no fax machines nor was there ever a fashion style of wearing double ties. Power laced shoes did exist but now shoes are one size fits all.  They merely tighten to the user’s size the same way most clothes do in 2115.  Also, the Japanese never took over the business world along with influencing fashion. China almost took over but WW III of the mid 21st century kind of put a damper on that one.  Indeed we saw flying cars zooming along a sky highway but there’s no floating markers.  It’s an invisible highway seen only on a computer screen in the vehicle. In addition, the hover cars are mostly flown by computer as well. Only those with a pilot’s license can actually manually drive them.

Thankfully a wide variety of convenient public transit has prevented the skies from being polluted with flying cars!  In addition, most ground roadways are magnetized to provide hovering with far less energy.  You rarely see tires anywhere! These roadways also act as solar panels for free energy. Some of which powers the lights built into the digital roads.  No more painted lines or ridiculously long annoying road construction projects.  Hoverboards exist as well flown upon the magnetized roads, and sidewalks. Though there is a more expensive variety that will fly anywhere…even over water!  Hover surfboards are the rage in 2115! People can enjoy the thrill of surfing without the skill or danger as they hover harmlessly inches above the waves.

Many people wear something like Google Glass that augments reality with holographic information and can receive video phone calls as well.  Contact lenses that do that same thing are expected to debut in 2123. There are also photo-realistic virtual reality devices, and suits for full immersion in fantasy environments.  As far as television, and movie theaters things have gone beyond flat screens with holographic surround sight rooms in homes, and public venues.  In fact, holograms are seen everywhere even when not wearing any eye devices.  Most notable are salespersons in stores, and waiters in finer restaurants.  Also, the tediousness of trying on clothes has been replaced by the ease of projecting holograms of the clothes onto your body.  Windows in most homes, and businesses are actually clear digital screens rather than just glass to see the outside world.  You might live in a crowded neighborhood, or city but the view out your window could be anything including a tropical paradise, under the sea, or even outer space.  All 3-D HD realistic video.

Television and the internet have basically become one entity.  Holographic surround sight rooms,  HoloTV’s, and  HoloChamber’s are devices to interact with it.  The internet is called the Virtualnet since it’s mostly in a virtual reality format rather than a 2-D flat screen. It’s becoming more frequently called the Holonet since it can be projected anywhere in three dimensions. Most websites are designed as environments to explore rather than the web pages of the past. As an example shopping sites are actually like walking through a real store and purchasing things. MysticInvestigations.Com still exists along with this blog.  It appears we designed it so users can explore our offices and access supernatural information that opens virtual portals to various venues around the world and beyond!

By 2115 space planes take the average person to orbital space resorts that rotate allowing for gravity in the outer areas while the center still gives visitors the thrill of zero gravity.  There’s even a popular sport played in space called G-Ball that is a Sunday sports staple on Holographic Television. A new Moon colony also exists, and it’s the furthest place a spaceplane can go. There is a colony on Mars but it’s still not something the average individual is comfortable with. Especially with the long journey. At least it’s no longer a one-way trip as it first was in the 2030’s. There are quite a few people who were born there and can actually call themselves Martians. Many of the Martian citizens conduct scientific studies, exploration expeditions, and mining operations. There’s also the terraforming project to make Mars more Earth-like. The projection completion is sometime near the end of the Millenium.

Time travel exists in 2115, or rather limited temporal communication. A device called the Temporal Communicator based on Dr. Ronald Mallett’s theory of twisting time back on itself via laser light exists.  It allows two-way communication with the past and future.  Although, it only works from the first time the device was activated to the future time it’s deactivated. It was turned on in 2089, and mysteriously ends transmission in 2256.  Due to the way 4-D time itself interacts with the 5th dimension along with the information exchange from the future it was determined that communications are actually from a series of Parallel Universes.  In several cases, the future did not turn out the same as reported by a witness through the temporal device.  Since it takes an amazing amount of power to keep the thing running it exists in outer space between two space stations.  It’s nuclear fusion, and solar-powered.  It’s quite possible that the space between the two stations of Temporal Communicator where disrupted in 2296 by a large asteroid, or perhaps one of the stations was destroyed.  There’s also the possibility that the government, and/or society in general turned the device off thinking it was better to not have knowledge of the future, or even a potential future altering their present.  The temporal device was responsible for exponential advances in technology!  Apparently, by 2290 we had the technology for basic interstellar exploration when it was originally forecast for the 31st century!

The Future Isn’t Set In Stone

Unfortunately the Sport’s Almanac[Ad] I brought back from the future only won me a few bets since it was all wrong!  That’s the problem with the pesky 5th dimension parallel Universes of our Multiverse being intertwined with our 4-D temporal reality. Skipping to the future and actually living to it creates different probable outcomes.  It’s probably better not to draw too much attention from future knowledge anyway. There’s the fact that Michael has had to dodge Time Cops from the future who have nothing better to do than harass time travelers.  I guess they don’t get that everyone just travels to near-identical parallel Universes, and aren’t altering their original timeline so who cares!?!

⏰See Our Original Back To The Future Article…

Back To The Future II Video Clips

Back To The Future III Video Clips